TRNN Correspondent Dimitri Lascaris reports from the ground in Caracas about Saturday's pro- and anti-government marches, highlighting their peacefulness and equal size

TRNN Correspondent Dimitri Lascaris reports from the ground in Caracas about Saturday's pro- and anti-government marches, highlighting their peacefulness and equal size 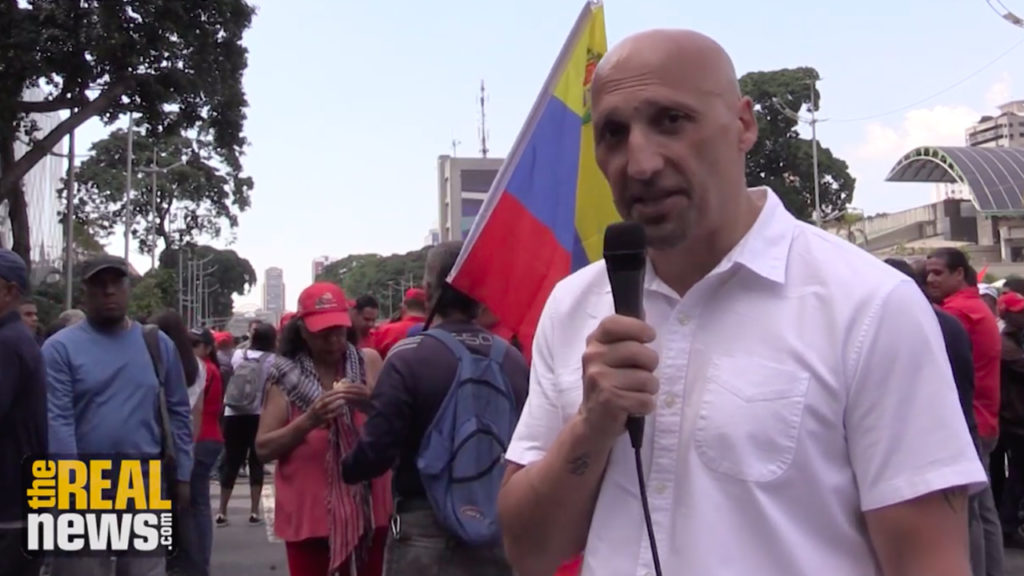 DIMITRI LASCARIS: This is Dimitri Lascaris, reporting for The Real News from Caracas, Venezuela, on Saturday, February 2. I am standing at the main intersection in the quarter of Mercedes in Caracas. This is an affluent, if not the most affluent, part of the city. And today the opposition led by Guaido has called a massive protest to continue to exert pressure upon the government of Nicolas Maduro to resign.

I would estimate I’ve walked for about six or seven kilometers with protesters who are converging on this point of the city. I’ve been with them now for about an hour, and certainly I would say the crowd is–consists of at least tens of thousands of people. You only see a small part of it here. And by any rational measure it is a very large protest.

And it certainly does indicate, at least for the capital, Caracas, that there is a very significant degree of opposition to the government of Nicolas Maduro. What is also interesting is that the protesters have been quite peaceful. And law enforcement authorities, on their side, have been virtually invisible. I think I’ve seen no more than 25 police officers during the entire six, seven kilometre route that I walked. I’ve seen no military personnel. I haven’t seen any police officers dressed in riot gear. The ones that I did see, the few that I did see, seemed to be there for no other purpose than directing traffic.

What is notable about this, of course, is that Western leaders have characterized Nicolas Maduro as a brutal dictator, and have accused the security forces under his command of having committed numerous atrocities against Venezuelan protesters and those who support the opposition. I’ve seen absolutely no evidence of that here. The one small sign I saw of military presence was that at one point what appeared to be a military helicopter flew overhead as we were walking towards this point. And the crowd waved at the helicopter, and smiled, and started clapping, as if to to send a message of welcome to whoever was piloting the helicopter.

But in any case, one has to contrast these claims that Nicolas Maduro is a brutal dictator to what I’ve seen here today, and to what we see oftentimes in the West. I’ve attended numerous protests in Canada and the United States which were far smaller than this, and sometimes–almost routinely–you’ll see police officers, dozens of them, at sizable protests, dressed in riot gear. And sometimes the police dressed in riot gear, in protests I’ve seen in the United States even outnumbered the protesters.

And let us recall that the figurehead of this opposition, the self-proclaimed president, is openly asking the military to rebel against the elected President Nicolas Maduro, and is effectively fomenting a military coup. Despite that fact, and despite the fact that these protesters are here to show their support for that politician, who has never been elected as president of Venezuela, there’s absolutely no indication, at least at this protest, that the government seeks to suppress the right of those who are opposed to the Maduro regime to express their dissent, and even to call for the removal of the president.

Here I’m in the western part of the city, standing on Avenida Bolivar. And it’s a little bit difficult to tell, I think, from this angle, but this crowd of pro-Maduro Chavista supporters extends all the way down to the end of the Avenue, where that tall building is situated. There are, I would say with confidence, tens of thousands of people out here today just as I saw probably tens of thousands of people at the pro-opposition rally. The people here are very peaceful. The atmosphere is rather festive. Just as I noticed at the opposition rally, there is absolutely no detectable presence of riot police, and no military presence at all. And to the extent there are any police officers at all–and I’ve only seen a smattering of them–they seem to be there to do nothing more than ensure an orderly flow of the protesters and the traffic. Which is quite a contrast to what you see at protests, whether they’re–especially when they’re against the regime, the governing regime, in the West, and Europe, and Canada, and the United States. Nowadays there’s routinely some contingent of riot police present, and sometimes a rather large contingent of riot police.

But here that’s just not the case, and it’s difficult to square the claims that Maduro is a brutal dictator with what one sees on the streets here in Caracas today.

This is Dimitri Lascaris, reporting for The Real News from Caracas, Venezuela.