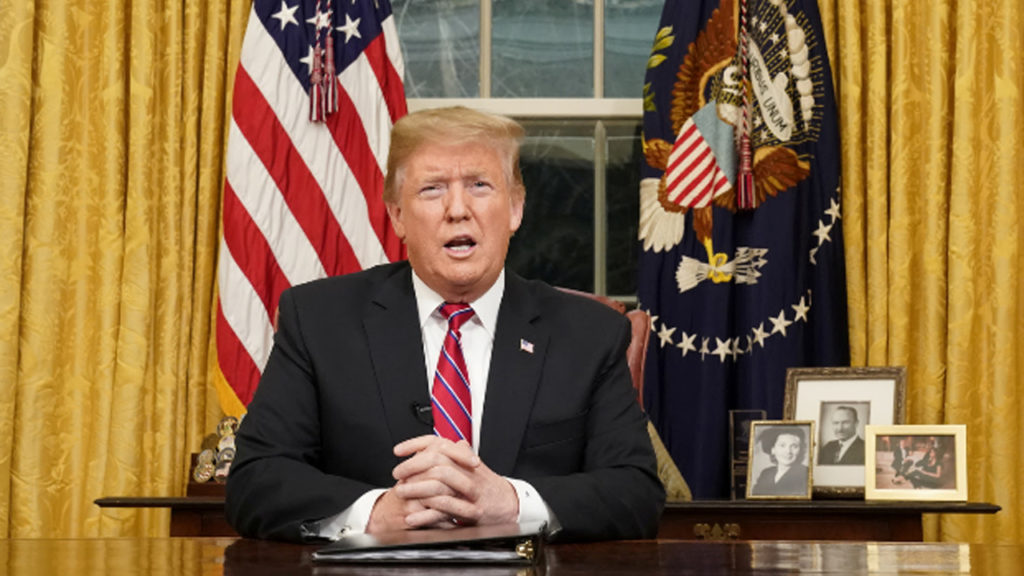 DONALD TRUMP: America proudly welcomes millions of lawful immigrants who enrich our society and contribute to our nation. But all Americans are hurt by uncontrolled illegal migration. It strains public resources and drives down jobs and wages. Among those hardest hit are African Americans and Hispanic Americans.

Well, now joining us to discuss this, from Kalamazoo, Michigan, Dr. Susan Pozo. Susan’s a professor in the Department of Economics at Western Michigan University. She’s the director of Global and International Studies and she’s also the past president of the American Society of Hispanic Economists. Thanks very much for joining us.

SUSAN POZO: Thank you for having me.

PAUL JAY: So what do you make of the argument? Whatever Donald Trump’s intent is, meaning I don’t know that he actually really cares about low wages seeing as he’s made a lot of money in the hotel business and other businesses that make a lot of money paying low wages, but let’s set that aside. Isn’t there some truth to what he says, that undocumented workers, the eleven million or so people that are here, not all of whom are working, a lot of kids, but that does drive down wages at the lowest end of the wage scale?

SUSAN POZO: Well, this is a question that has been asked for eons and eons, and economists have actually spent a lot of time trying to estimate the degree to which immigrant workers, including undocumented immigrant workers, compete with workers in the United States. And what they come to conclude is that there’s very, very little impact, that it may be the case that there is a slight negative response in wages of workers who are already in the United States to an influx of new workers, but it’s teeny tiny.

And for the most part, who it hurts is not so much U.S. workers, but earlier immigrant workers, workers that arrived a year or two or three beforehand, who are very similar to the new, low-skilled undocumented immigrant workers who might be coming in. They are generally somewhat disadvantaged with respect to language, but once a worker acquires U.S. language skills, they tend to then move up the job ladder and they’re no longer competing with those that are coming in. So the results seem to indicate that there’s a minimal impact. And instead, what we tend to see is that the immigrant workers end up raising the earnings and the wages of anyone who is a little bit above, with higher skills, they’re complementary to those other workers.

PAUL JAY: Well, wouldn’t the counter argument be that if there were no undocumented workers, and there’s this general–I don’t know if it’s true or not, but it’s widely said that at the lowest end of the wage scale where undocumented workers are working, American workers don’t want to work at those jobs anyway. But if that’s true, isn’t the reason they don’t want to work at those jobs anyway is the wages are too low, and if there weren’t any undocumented workers, then that wage level would have to rise to a certain point where they could attract domestic citizen workers? Doesn’t that make sense?

SUSAN POZO: Well, but then the argument is those citizen workers may be able to go into other jobs, higher paying jobs. Why would they want to go to the relatively low-skilled jobs? When you have a low-skilled worker working with an individual who has a little bit more higher skills, then the higher skilled worker ends up being able to earn more. So for example, we have a lot of women who have been able to go into the labor market because they’re able to hire nannies and childcare workers and individuals who can clean their houses. So no, why should the U.S. worker want to be working in those occupations?

PAUL JAY: Wouldn’t it be just be supply and demand? They claim there’s full employment now, but there’s never really full employment. And certainly, at times of higher unemployment, that if these jobs pay more, then people would have to work in them to survive. And if they paid a higher wage, it would attract more of a workforce.

SUSAN POZO: Well, but then what would that end up doing to the rest of the U.S. economy? Let me give you another set of numbers. So for example, we know that the Secure Fencing Act of 2010 ended up resulting in, to some extent, a slight reduction in undocumented immigrant workers. And as a result of that, it is true that the less skilled workers ended up gaining about 36 cents annually. If we spread it across, all less skilled workers. Now on the other hand, college educated workers lost four dollars annually in earnings.

PAUL JAY: And what’s the logic there, why college workers would have lost?

SUSAN POZO: They lost because they didn’t have the unskilled workers to increase their own productivity, to complement their skills, and therefore allow them to be more productive.

PAUL JAY: And you’re talking like the example of nannies and babysitters and things that would free college educated workers to go to work.

PAUL JAY: But that then puts college educated workers sort of benefiting from this real low wage culture of undocumented workers. And the reason, I think, to a large extent they work for such low wages is precisely because they’re afraid of deportation, they’re undocumented, it’s harder to fight for one’s rights.

SUSAN POZO: And that’s true. It would be much better if we had some sort of immigration reform and we could bring these workers out of the shadow.

PAUL JAY: It seems to me that’s maybe the most important argument. I mentioned this in another interview today, that if workers are afraid of this competition driving down their wages, then workers should be fighting for full citizenship for the whole eleven million people. Because if you take out the deportation terror, then people can fight much better together, including fighting to get unionized.

SUSAN POZO: Well, and individuals would also just, in general, be able to move around more. And by moving around more, they’re going to be able to sort themselves into occupations and into jobs where they’re really needed, where they can increase their wages.

SUSAN POZO: Well, that’s true for those undocumented workers. They’re certainly at a great disadvantage in that regard.

PAUL JAY: Well, thanks very much for joining us.