Elliott Abrams: The War Criminal Running US Policy in Venezuela

The recently named US Special Envoy on Venezuela, Elliott Abrams, is back in the halls of power after a career of supporting dictators, violence and genocide around the world

The recently named US Special Envoy on Venezuela, Elliott Abrams, is back in the halls of power after a career of supporting dictators, violence and genocide around the world 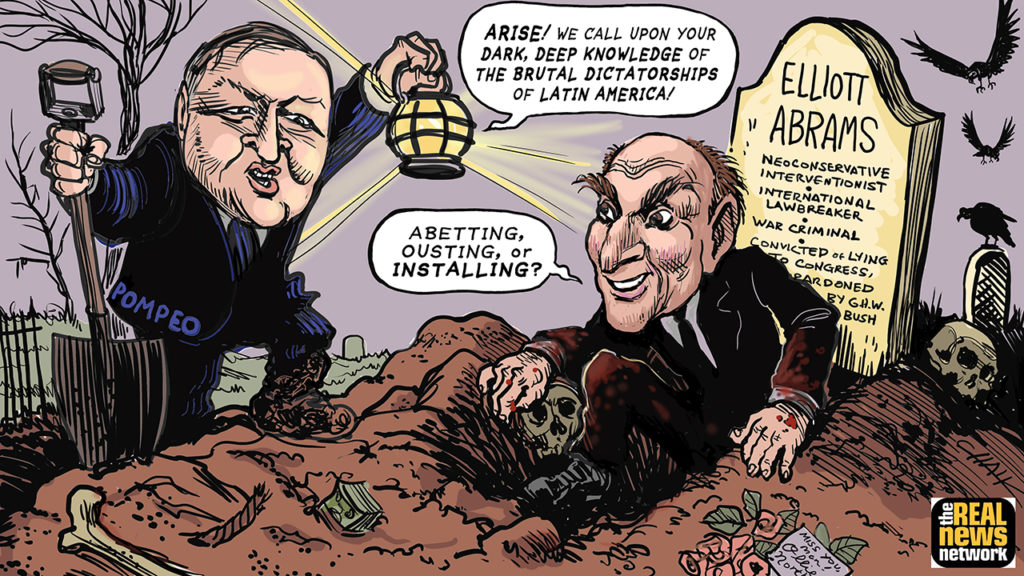 MIKE POMPEO: Elliott’s passion for the rights and liberties of all peoples makes him a perfect fit, and a valuable and timely addition.

ELLIOTT ABRAMS: It’s very nice to be back.

NARRATOR: Abrams’ appointment as special envoy to Venezuela comes as somewhat of a surprise. First of all, he strongly criticized Trump in 2016 when he wrote an article titled When You Can’t Stand Your Candidate.

But more importantly, Abrams was convicted in 1991 for attempting to cover up details of the Iran-Contra scandal while speaking to Congress. Last year, Sen. Rand Paul warned in an op-ed not to let Abrams anywhere near the State Department. “Crack the door to admit Elliott Abrams,” Paul continued, “and the neocons will scurry in by the hundreds.”

RONALD REAGAN: Central America’s problems do directly affect the security and the well-being of her own people.

NARRATOR: Abrams’ hawkish, neoconservative roots reach back to the beginning of his career. During the Reagan administration, when U.S. involvement in Latin America was ramping up, through a number of positions at the State Department, including, ironically, Assistant Secretary of State for Human Rights and Humanitarian Affairs, Abrams defended and helped cover up atrocities carried out by U.S.-backed governments in El Salvador, Honduras, and Guatemala. While then-Guatemalan President Efrain Rios Montt was carrying out what the UN would later call a genocide against the Indigenous people of the Axil region of the country. Abrams was in the halls of Congress lobbying for continued military aid to the murderous dictator.

ALLAN NAIRN: -Have to be even-handed. If we look at a case like this I think we have to talk–start talking about putting Guatemalan and U.S. officials on trial. I think someone like Mr. Abrams would be a fit subject for such a Nuremberg-style inquiry. But I agree with Mr. Abrams that Democrats would have to be in the dock with him. The Congress has been in on this. The Congress approved the sale of 1,6000 M-16s to Guatemala in ’87 and ’88.

CHARLIE ROSE: Hold on for one second [crosstalk]

CHARLIE ROSE: And again, I invite you and Eliott Abrams back to discuss what he did. But right now-

ELLIOTT ABRAMS: Thanks, Charlie. But I wasn’t- [crosstalk]

ELLIOTT ABRAMS: It Is ludicrous. It is ludicrous to respond to that kind of stupidity. This guy thinks we were on the wrong side in the Cold War. Maybe he personally was on the wrong side. I am one of the many millions of Americans [crosstalk]

ALLAN NAIRN: Mr. Abrams, you were on the wrong side of supporting the massacre of peasants and organizers, anyone who dared to speak to the [crosstalk] absolutely. And that’s a crime. That’s a crime, Mr. Abrams, for which people should be tried.

NARRATOR: Abrams not only cheerled brutal U.S.-backed governments in Latin America. He promoted U.S.-backed rebels in the region as well, such as the Contras in Nicaragua, who were fighting to overthrow the socialist Sandinista government. His by-any-means-necessary approach to help overthrow the Sandinistas revealed a deep contempt for international law.

He, along with Lieutenant Colonel Oliver North, tried to secure funding for the Contras illegally by soliciting a $10 million contribution from the Sultan of Brunei. He also threatened to end U.S. aid to Costa Rica in 1986, when the country said it would make public the fact that there existed an illegal Contra airstrip within its borders.

By the mid-1990s, Abrams had already defined himself as a convicted criminal and defender of Latin American regimes the world now knew were brutal and genocidal. He had also since helped orchestrate a disastrous invasion of Panama in 1989.

When it was over, thousands lay dead and wounded, and the country was in shambles.

NARRATOR: But despite Abram’s long lists of crimes and blunders, he was not only pardoned by George H.W. Bush in 1992 after being sentenced only a $50 fine, two years probation, and 100 hours of community service, but was once again tapped for help in reshaping America’s foreign policy for the 21st century. The Project for a New American Century was founded in 1997, and its architects were bent on bringing Reagan’s policy of military strength and moral clarity, along with Reaganite advisers such as Elliott Abrams, back into the mainstream.

PNAC’s targets for intervention included Syria, Lebanon, Libya, Somalia, Sudan, Iran, and of course, Iraq. And three of PNAC’s main architects–Dick Cheney, Donald Rumsfeld, and Paul Wolfowitz–would serve in George W. Bush’s administration. And Elliott Abrams served as a director on Bush’s National Security Council, not only in enacting PNAC’s agenda, but sanctioning other interventions, such as the failed 2002 coup attempt in Venezuela that sought to remove Hugo Chavez from power.

Abrams also signed a letter to Bill Clinton in 1998, urging Clinton to remove Saddam Hussein by force. The letter went so far as to dismiss the international community’s opinion, saying that American policy cannot continue to be crippled by a misguided insistence on unanimity in the UN Security Council.

Since supporting the wars in Iraq and Afghanistan, Abrams has, unsurprisingly, continued to take the most hawkish positions available in Washington, from supporting Israel’s apartheid state, to fighting the Iran nuclear deal, to supporting American airstrikes in Syria.

In September of 2018, Donald Trump hinted that Venezuela could soon see a change of power.

DONALD TRUMP: It’s a regime that, quite frankly, could be toppled very quickly by the military, if the military decides to do that.

NARRATOR: It is evident that the Trump administration has been planning to overthrow the Maduro government for some time–a continuation of U.S. policy that led to the 2002 coup attempt against Hugo Chavez. While then President Bush tried to keep the U.S. hidden in the background of that failed coup, Trump has returned to the overt aggression that characterized the worst days of U.S. interference: support for right-wing dictators, and war crimes throughout Latin America. It’s a criminal policy out of the Elliott Abrams playbook.