Executive Producer Eddie Conway speaks with Agzja Carey, a former employee of Target, who argues the shutdown was not due to lack of profitability.

Executive Producer Eddie Conway speaks with Agzja Carey, a former employee of Target, who argues the shutdown was not due to lack of profitability. 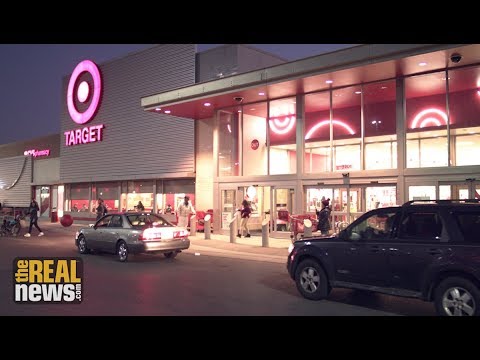 EDDIE CONWAY: Welcome to The Real News. I’m Eddie Conway coming to you from Baltimore. Recently, in West Baltimore, one of the major shopping centers has been threatened with the loss of one of its retail outlets, the Target store, which just happens to be the only Target in the Black community.

EDDIE CONWAY: This is part of a bigger push to close stores across the country. Target’s corporate headquarters made the following statement.

SPEAKER: Target is a really big store. It sells a lot of things that I may need, I buy equipment here, camera equipment, electronic stuff, sometimes, clothing, things I may need around the house. It’s such in a convenient locations, it’s a hardship for it to be moved from here. For me, it’s a really good store. I enjoyed it.

EDDIE CONWAY: I talked to some people at Mondawmin and asked them how they felt about it.

EDDIE CONWAY: What the problem is?

CUSTOMER: No, I don’t even wanna say what I think the problem is.

CUSTOMER: To my personal opinion, I believe they’re really moving Target because it’s in a Black community. This is just how they’re doing it.

CUSTOMER: This one is the one everybody goes to.

CUSTOMER: It just adds to the problem of food deserts or better said, what I like to call as food apartheid because it’s gonna be less grocery stores. This is one less. The only thing we have over there is shoppers and then, Target; but, otherwise, it’s not a lot of big grocery stores for you to be able to get produce within walking distance.

EDDIE CONWAY: I also had the opportunity to go to a Town Hall meeting called by a Councilman Pickett and listen to the voices of the community there.

TOWN HALL SPEAKER: In some communities, a store like Target is a luxury. In communities like this, they are a necessity and not that this type of news is palatable under any circumstances but the fact that it came without any notice, warning, or discussion is at best, inconsiderate and quite frankly, disrespectful to a constituency, both public and private, that has been its chief supporter

Nobody wants you to leave but we want you to be respectful to the community.

TOWN HALL SPEAKER: You want me to keep quiet, but you’re not doing anything for the community. You’re begging Target with staying here. Target don’t care about African Americans.

TOWN HALL SPEAKER: I say to Target, see you later. Let’s say that we can build something for ourselves and stop begging somebody.

EDDIE CONWAY: So also, heard some testimony from a former employee and a community activist, and so joining me here today is Asia. Asia, give us a little bit about your background with Target, please.

ASIA: Sure, sure. Around 2010, 2011, 2012, I was the executive team leader at Target. I oversaw the hard lines department which basically is the entire sales floor minus the clothes. I also managed the planogram team which is responsible for the building out of the organization or of the store. So, in that capacity, we had sales metrics, that was designated every day, that came down from corporate, that was an indication of what was expected to do for our volume. When we talk about what’s going on with Target, and is it a sales issue, or what is the real reason, I can say from my experience, we met our marks. There’s variance as with any retailer organization. So, say it rained. There might be a missed sale that day, but that was common across the district. So, it’s my analysis that this is not about sales or revenue.

EDDIE CONWAY: Okay well, one of the things you said last night was some alternative, It seemed, and I don’t know how much push back it’s going to be from the community but as far as Target is concerned, they’re going to close that store on February the 3rd. And if that happens, and of course they own the property and the parking lot, perhaps they will sell it. But if they don’t sell it, maybe people will be forced eminent domain and maybe the city would just take control of that property. But you made some wonderful suggestions of how that property might be used. Can you share with us both of them?

ASIA: Right absolutely. So, I think this actually is an opportunity for a revitalization effort in West Baltimore that really promotes either two options: small businesses, local, small, minority owned businesses having an opportunity to build local stores that have unique value. The big box retail chain is just not a model that works, period, right now. Right now, with the internet, a lot of retailing is going online, so the idea of bringing in another retailer may not necessarily be the most advantageous. But in addition, when we think about what’s happening in Baltimore, I said yesterday that Baltimore, from my knowledge is being starved out of resources and a lot of the power and control is in the hands of developers, and we have a unique opportunity to elevate home grown, local business districts that not only provide a service and an example to the young people and to the community at large in West Baltimore, but it gives employment opportunities.

And I wanted to highlight the employment piece a little bit because one of the biggest reactions I had to Target leaving wasn’t so much the convenience of the store, but the amount of jobs that were provided. There are team members at that store, who opened a store and this is like a staple source of income. There’s team members who were at that store, that have gone on through the coaching and development of the team, to get different opportunities that were more reasonable with the living wage. So, there’s a lot of opportunity for career stability and/or career advancement. Target did not necessarily offer a livable wage at the team member rate but there was opportunities for college students, and for some recent high school graduates to just get there foot a corporate-esque sort of environment.

And one more thing. I think that as we think about the youth fund coming down the pipe, and some of the major opportunities that we have on the table with having associated black charities kind of manage the 12 million dollars, and really dispersing the money from a race and equity standpoint, this is an opportunity to provide physical space for the community to engage in activities and programming for young people. So, as we talk about education, as we talk about crime, as we talk about public safety, which are all things that came up at yesterday’s meeting, this is an opportunity for the community to come together with a solution that will serve the community.

I just think that, I was at city hall last week and there was a conversation around TIFs, and I think that if we can engage Baltimore city residents, also understanding that this is an election year coming up, right? And that the people have the power to drive decisions. The only thing that’s missing is engagement in a unified platform. If the community can come together and do a vision board, where they do community planning and input their ideas, what they need, there is a high chance that this can actually happen. But it has to come from the community. And the community has to engage their elected officials, and hold elected officials responsible opposed to this sit back and wait mentality and having developers drive the development West Baltimore.

I also say I think, what I appreciate about the forum yesterday was that a lot of the residents gave context of the different stores that have been there historically in this area and how it’s not a matter of lack of profitability, right? That’s not what’s going on. And the community is spending money. So, it’s not a risk. There can be some opportunities but there’s enough investment that the city will invest, that the community will invest to help mitigate some of the risks that do exist, because there’s risk but it’s not around profit, right? So, with that, this notion that you have to entice big companies to come into black communities is a false premise. That’s inaccurate. What I said yesterday, what I think happened is that, there was an expectation that gentrification would happen faster and it did not. Profitability is not the issue, but the way they want that community to look didn’t manifest that way.