Does Recognition of Parallel Gov’t in Venezuela Violate International Law?

A recent study conducted by the German parliament's independent scientific research service found that international recognition of the self-proclaimed "interim president" Juan Guaidó probably constitutes a violation of international law. We discuss the study's implications with Andrej Hunko, who commissioned the study

A recent study conducted by the German parliament's independent scientific research service found that international recognition of the self-proclaimed "interim president" Juan Guaidó probably constitutes a violation of international law. We discuss the study's implications with Andrej Hunko, who commissioned the study

Research Services of the German Bundestag: On the recognition of foreign heads of state 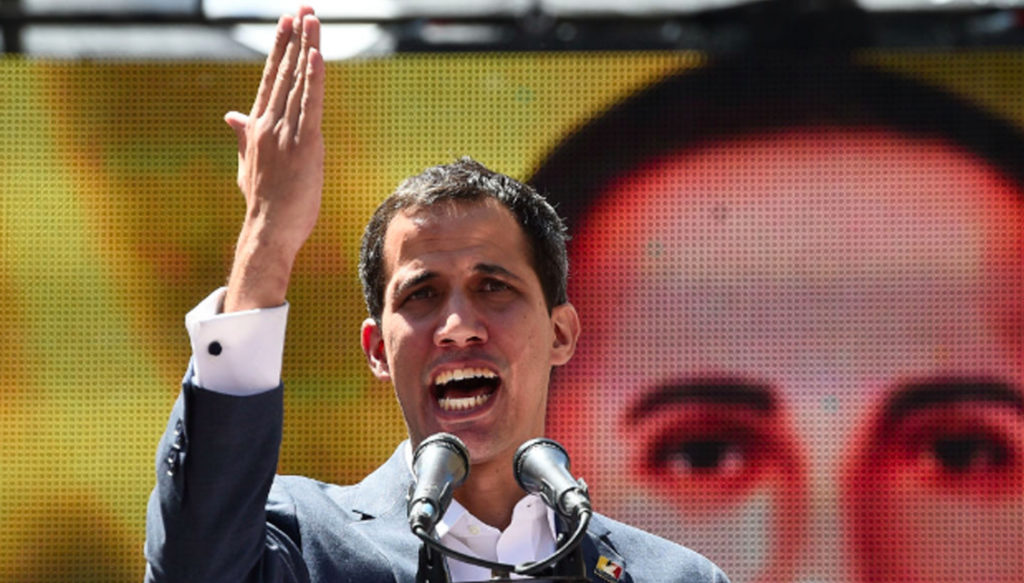 Is the recognition of Venezuela’s self-proclaimed interim and parallel president legal under international law? This is one question that practically no government that has recognized the Venezuelan opposition leader Juan Guaido as president has really had to answer so far. Earlier this month a member of Germany’s Parliament from the Left Party, Die Linke in German, asked the Parliament’s neutral investigative arm for an evaluation of the legality of recognizing Guaido, given that Chancellor Angela Merkel recognized Guaido. The independent investigation’s findings should be disappointing to her. It found that the recognition probably represents an illegal interference in the internal affairs of Venezuela.

Joining me now to discuss the report’s findings is that member of the Bundestag who initiated the inquiry, Andrej Hunko. He is a member of the executive committee of Die Linke, and represents the town of Aachen in the Bundestag since 2008. Thanks for joining us today, Andrej.

GREG WILPERT: So, first give us a brief summary of what the research service of the Bundestag found with regard to the recognition of Juan Guaido. What exactly did it say in terms of the legality of this recognition?

This made a lot of noise in the German media. And there were a lot of other international experts and international law professors that said more or less the same. So it’s a very precarious position the German government stepped in. From the German point of view, as well, it’s a breach of a tradition of German foreign policy, because Germany always recognized states, but not individual persons. This is a very new phenomenon. And so it’s a very–it’s a very serious situation. At the same time I’m criticizing critically because I say this is–it’s, I don’t see how Mr. Guaido can organize elections without having the power in the country. And this would mean, if international, so-called, international community would push it through, that would mean some kind of military confrontation. And this is a–and maybe a civil war in Venezuela. And that would be the worst scenario.

GREG WILPERT: Well, it seems that the report also recognizes that. I mean, they make an important point that if the recognition–the recognition would be especially illegal if it was backed up with the use of force. Now, the Trump administration, and other governments such as the one of Germany, have not yet intervened militarily. But the Trump administration certainly has threatened to do so. Not only that, they’ve imposed harsh sanctions on Venezuela. Now, could that be considered the use of force, these sanctions?

GREG WILPERT: Now, these findings of the research service are based on international law. Now, to what extent is it binding for the German government? And if so, would it be enforceable in Germany’s courts? And has the government of Chancellor Merkel reacted to these findings in any way?

ANDREJ HUNKO: Well, that’s a problem always with international law, how to put it into real, binding national law. As far as I know there was never a case where the German government was. Condemned by a court for this. For example, in the case of the war in ’99 against Yugoslavia, with participation of Germany for the first time, either way, this was clearly without a UN mandate, and this was against international law. But there was no successful complaint at the courts. So it’s quite difficult to push it through juristically, really, judicially. But politically, of course this is a big issue. We put on Wednesday, here in the Parliament, we asked the Foreign Ministry and the findings of the scientific departments of the Bundestag. And what are they saying about this–and they said they will not comment on this, but more or less indicating that they’re not really interested in this debate. So they are trying to push it aside.

But in the public here now it is a real issue; in the media. And of course it’s a political pressure we could initiate on the government to respect international law. Not only in Germany. I have heard from other European parliaments, for example in Netherlands or in Slovenia, that they are using these findings of the scientific departments of our parliament for their own debate in their parliaments about this very, very new case of recognizing a person in a foreign country with no real power, and just self declaring “I’m the president of this country.”

GREG WILPERT: One final question. Now, why do you think that the government of Angela Merkel would even bother with initiating this very unusual move and following in the footsteps of the Trump administration, despite the obvious threat that it could mean for human life, should there be an actual coup in Venezuela?

ANDREJ HUNKO: Well, it’s always a debate here, as well; why is our government so closely following the U.S. government? The government at the moment. I think in the case of Venezuela, this was very well prepared. It’s not just more or less–sudden situation. It seems long prepared. And I think there were some talks in the last, I don’t know, weeks or months to do it like this. And a lot of pressure from the U.S. side. I don’t have any concrete information about this pressure, but I think it’s very probable. What I read today is, for example, as you know, some other European state don’t recognize Guaido at all; like, for example, Italy, or Greece, or Cyprus, or Slovakia. And I got the information that there was a lot of activity of U.S. Embassy to push both these elements for recognition of Guaido. And I think it has been the same here in Germany. But I have no concrete information on this.

GREG WILPERT: OK. Well, we’re going to leave it there. I was speaking to Andrej Hunko, member of Germany’s Bundestag and of the Left Party’s Executive Committee. Thanks again, Andrej, for having joined us today.