A proposal to curb superdelegates and the primary win of Alexandria Ocasio-Cortez are putting Democratic Party elites on edge, says Norman Solomon

A proposal to curb superdelegates and the primary win of Alexandria Ocasio-Cortez are putting Democratic Party elites on edge, says Norman Solomon 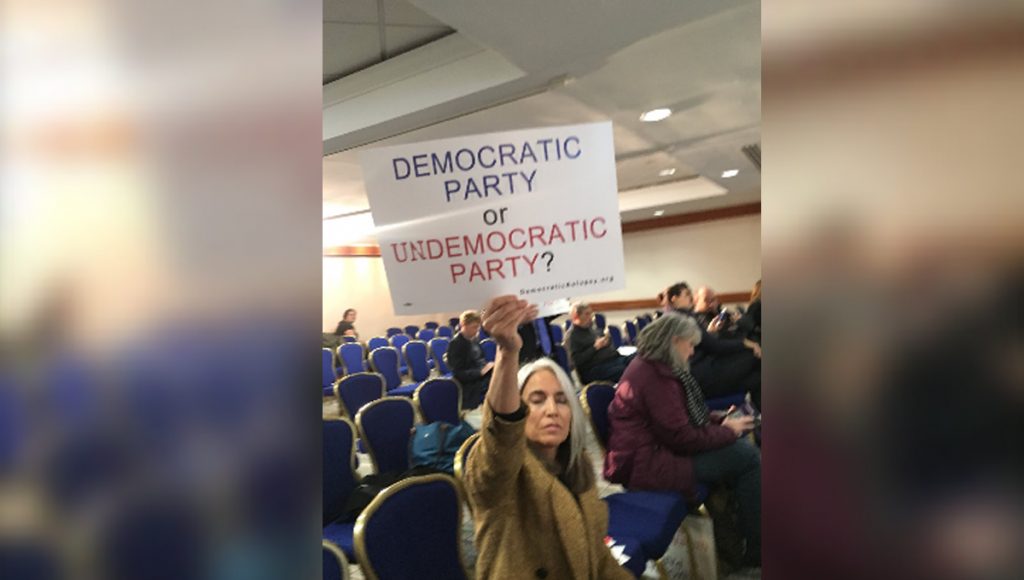 In recent weeks, Democratic Party elites have suffered some big losses. First, Democratic Socialist organizer Alexandria Cortez defeated party leader Joseph Crowley in the New York primary. One day later, the Democratic National Committee took a major step towards curtailing the influence of the party leaders that Crowley represented. The DNC Rules and Bylaws Committee passed a measure to stop superdelegates from voting on the first ballot at the DNC. The superdelegates are unelected party elites whose votes are counted on top of the general primary results.

DEBBIE WASSERMAN SCHULTZ: Unpledged delegates exist, really, to make sure that party leaders and elected officials don’t have to be in a position where they are running against grassroots activists. We are, as a Democratic Party, really highlight and emphasize inclusiveness and diversity at our convention, and so we want to give every opportunity to grassroots activists and diverse, committed Democrats to be able to participate, attend, and be a delegate at the convention. And so we separate out those those unpledged delegates to make sure that there isn’t competition between them.

SPEAKER: I’m not sure that that would that answer would satisfy an anxious young voter, but let’s move on.

AARON MATE: So the DNC Rules and Bylaws Committee’s vote to curb superdelegates is a major victory for the grassroots activists that Wasserman Schultz was talking about. But before the new rule can take effect, the full DNC must first approve it at the next DNC meeting in August. And there are indications that party elites may still put up a fight to block it.

Joining me is Norman Solomon. He is the coordinator of the online activist group RootsAction.org, and executive director of the Institute for Public Accuracy. Welcome, Norman.

So this vote by the Rules and Bylaws Subcommittee passed by a very large margin. I believe there was just one vote against it. But you have party leaders in Congress and outside of it grumbling, saying that they’re not happy about this. And do you expect a fight about it when the full DNC meets on this in August?

NORMAN SOLOMON: Yeah, I think when there is a full meeting of more than 400 members of the national DNC in Chicago in late August, there’s going to be quite a fight. The results are unclear. That kind of double talk that we heard in that clip from two years ago then-Chair of the DNC Debbie Wasserman Schultz, is the best defense, really, that could have been made. And it’s totally specious. The Democrats in Congress, many of them liked that kind of defense. And so they don’t want to give up their privilege, even though it was so off-putting, and in some cases infuriating, for the Democratic Party, base and people who believe in small-d democratic activity. So I think there is a clash coming up. But there’s a lot of momentum for this major reform, which, frankly, a lot of people on the left didn’t think would happen.

AARON MATE: So you have a piece about this issue up on Truthdig, and you quote Congress member Gerry Connolly of Virginia, a Democrat. And you quote him as complaining, quote: That this vote to curb superdelegates, quote, disenfranchises the elected leadership of the party. Interesting formulation there, that to speak of the party leaders being disenfranchised by a vote that would, simply by a rule change, that would simply privilege the votes of the mass majority of DNC members.

NORMAN SOLOMON: Yeah, that kind of complaint from the Party is, of course, bass ackwards. But it reflects the sort of upside-down bubble that they function in. The superdelegate system disenfranchises voters by holding the elite thumbs on the scales before a single actual voter gets to choose. If you look at what happened in 2016, in that race for the Democratic presidential nomination, most of the superdelegates have already publicly declared their allegiance to and plans to vote for, at the convention, Hillary Clinton, before a single voter at a Democratic Party caucus or primary is able to cast a ballot.

So this is how sort of inverted the perspective of the power structure at the top of the Democratic Party has been. And I think what we’re seeing now is the beginning wave of results of pressure from the grassroots. It was manifested by the Bernie Sanders campaign. And in sharp contrast to the prior chair, Debbie Wasserman Schultz, of the DNC. The current one is taking a very different tack. Tom Perez, not actually out of some goodness of his heart. He was aligned with Clinton in 2016 in the primaries. But through recognition of the real balance of power that shifted, he’s been giving passionate speeches and statements in favor of getting rid of any superdelegate votes on the first ballot of the convention. And we should keep in mind that there’s never been any more than one ballot at such conventions since 1952.

So it helps us to really see why Democrats in Congress who automatically have been superdelegates in these conventions, why some of them are so riled up and may well put up a fight next month when the final vote is taken by the DNC.

AARON MATE: Right. Which brings us to the recent victory of Alexandra Ocasio-Cortez defeating party leader Joseph Crowley on a staunchly democratic socialist platform. And let’s talk about, then, how the Democratic Party elites are responding to that. I first want to play a clip of not a Democrat, but a longtime Republican, Steve Schmidt, who recently announced he is leaving the Republican Party. And he was speaking on MSNBC, and he cautioned against Democrats embracing a candidate like Ocasio-Cortez, who he even compared to Donald Trump.

STEVE SCHMIDT: Once upon a time in American politics it was a business of persuasion. You would try to persuade people that your ideas were slightly better than the other side. It has become a game of incitement. And what Trump is doing is radicalizing American politics. And he is a beneficiary. The more radical politics becomes, when it becomes a game of incitement between a far left who says everybody’s going to have a government job, everybody’s going to have day care, everybody’s going to have retirement, free school, free high school, free college education, as we careen towards $30 trillion in debt. When we have dishonest progressivism, right, and we have dishonest Trumpism, and alienated middle surrenders. They break their will to fight back. They become disenfranchised and hopeless about the idea that free market capitalism or liberal democracy can prevail in a radical era. That is the danger.

AARON MATE: That’s Steve Schmidt, former campaign manager for John McCain, recently announced he’s leaving the Republican Party over his opposition to Trump, speaking about Alexandria Ocasio-Cortez. So, Norman, that’s one element of the elite reaction to her victory. But then you have others like Nancy Pelosi saying that this is only one district, that the party is not moving to the left. You have others like Valerie Jarrett, former top aide to President Obama, saying that Ocasio-Cortez stands apart. She defines herself, she doesn’t let others define her. Sort of everyone trying to paint her as either, in the case of Steve Schmidt, you know, too far on the fringe, or in the case of others like Jarrett or Pelosi sort of as an anomaly, something that stands out and should not be part of a general trend inside the Democratic Party.

NORMAN SOLOMON: Yeah. Those three comments sort of epitomize the various strands of what I think it was C. Wright Mills called the crackpot realists, or the crackpot centrists, you might say, where they’re basically trying to revert to a status quo, which is part of the problem that the Democratic Party is at nationally. When you defend the status quo, that involves the increasing reservation and economic insecurity of so many people in this country, let alone in so many parts of the world. And you also have this cataclysmic climate change looming over us, and so many other facets of environmental and social degradation. Fundamentally unjust economic corporate capitalist order. And essentially we have people saying in various styles, well, just go back to the old verities. Well, the old verities weren’t verities. They were falsehoods, ways of ripping off working people, fundamentally to enrich the already rich.

So if we’re going to change that paradigm, I think we can’t buy into this false notion that all we’ve got to do is go back to the sort of stance that was really built into the Hillary Clinton general election campaign where, remember her response to Trump, was America is already great. I mean, I hate to think how much the Democratic Party consultants were paid to come up with that slogan. And can you think of a few words that more epitomizes a complacency, an arrogance, about the status quo than America is already great?

AARON MATE: Norman Solomon, coordinator of the online activist group RootsAction.org, and executive director of the Institute for Public Accuracy, thank you.

Norman Solomon is the co-founder and National Coordinator of RootsAction.org, and a coordinator of the Bernie Delegates Network.