A lift on shale gas exploration moratorium has angered environmentalists

A lift on shale gas exploration moratorium has angered environmentalists 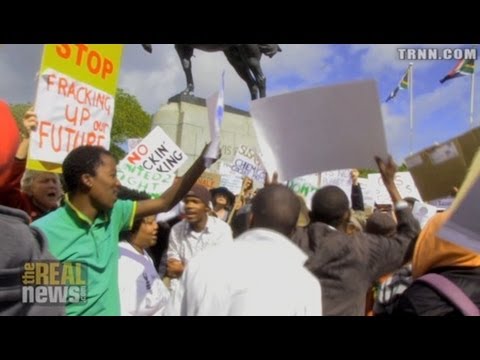 NARRATOR: It was this announcement two weeks ago by South Africa’s Minister of Mineral Resources Susan Shabangu that renewed fears by anti-fracking groups that what they dreaded most might be slowly becoming reality.

NARRATOR: Jonathan Deal is becoming the leading voice of resistance against fracking in South Africa. The government of South Africa instituted a moratorium on shale gas exploration in 2011, following fierce criticism against the planned gas hydraulic fracturing. Five companies including petroleum giants Shell and Canadian based Falcon Oil and Gas Limited have applied for licences to explore at least 20 percent of South Africa’s land

NARRATOR: The minister said the government will proceed with caution, but Deal believes this is a gamble the country can not afford to take and a legal battle is looming

NARRATOR: At the national parliament in Cape Town, anti-fracking activists chanted and sang against the government’s move. The protest was part of a world campaign called Global Frackdown.

NARRATOR: Picketers in South Africa denounced Shell for committing $200 million to the exploration of gas. They said such money is better used in pursuing greener options such as solar.

NARRATOR: An assessment by the Petroleum Agency of South Africa concluded that as much as 30 trillion cubic feet of shale gas maybe be recoverable from the country’s underground. This, the research estimates will create at least 50 000 jobs.

A report released by the water Research Commission has given anti-fracking proponents more vigour and reasons to oppose the government move. The state commission research revealed that fracking poses cancer risks from chemicals used during the process.

These fears are much more pronounced in the Karoo, a expansive arid grassland that is 2 hour drive from the coastal city of Cape Town. Apart from groundwater contamination, The Karoo’s endangered species of plants, animals and birds, activists say, will also be affected.

NARRATOR: This is a cause veteran lawyer Paul Hoffman is keen to defend. He says despite the government’s might, precedent cases show how ordinary, organized citizens can successfully win cases in court.