Davey D: What appeared as President Obama's unexpected comments on race should be seen as calculated, while he considers NYC Police Commissioner Ray Kelly as the next Homeland Security Secretary

Davey D: What appeared as President Obama's unexpected comments on race should be seen as calculated, while he considers NYC Police Commissioner Ray Kelly as the next Homeland Security Secretary 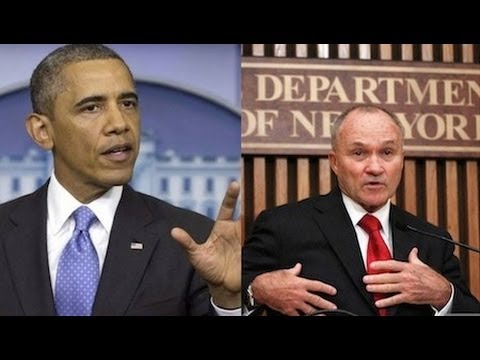 Last Friday, President Obama made an unexpected appearance in the White House briefing room and discussed, of all things, race.

Now joining us to unpack what the president had to say is Davey D. Davey is a hip-hop historian, journalist, DJ, and community activist. He hosts his own radio show called Hard Knock Radio on KPFA in San Francisco, as well as other Pacifica station. And he teaches at San Francisco State. Thanks for joining us, Davey D.

DAVEY D, RADIO TALK SHOW HOST: Thanks for having me.

DESVARIEUX: So, Davey D, what were your impressions of the president’s speech?

DAVEY D: I think it was good that he spoke about race in a little bit more personal tone. But with Obama nothing is ever off-the-cuff as he tried to portray. I don’t think everything–I think what he does is always cautious and it’s always calculated. And so I found myself going, hmm, what else is going on in the background? What is this really about? Because I think him as a black man already knows what’s going on in terms of our community, or he should. He probably is around enough people to let him know how the room temperature is. And so when he doesn’t speak, it’s very calculated and very deliberate, and when he does, it’s very deliberate, and it’s usually designed to further a particular agenda or to keep us misdirected.

So I found myself asking what else is going on. And the reason why is because although he talked on a personal tip, he didn’t really offer some solid–I wouldn’t say solutions. He didn’t make a commitment towards a particular path. I mean, he said stuff that I think anybody who is African-American already knows. And I don’t think it was something that white folks who have an issue with race were going to pick up and suddenly come to some sort of understanding.

DESVARIEUX: Take a listen at some of the comments that the president made about his own personal experience with racial bias.

DAVEY D: Well, let’s kind of put things into perspective. Conversations on race have been going on for the past two centuries in this country. So, you know, to make it seem like the president is coming in and he’s going to lead a conversation on race kind of–it omits a lot of history and it doesn’t do service to the people who are on the ground making moves and trying to really bridge, you know, create bridges between various populations.

I think, you know, the president might have–it would have been good if the president pointed out and highlighted work that people were doing all over the country, whether it was the roundtables that they were doing in Michigan, whether or not it was the race conference that he conveniently didn’t show up to in 2009 after he got elected after being pressured by AIPAC; whether or not it’s the on-the-ground work that people do like Color Struck, which is a play that Donald Lacy puts together out here that talks about race; or whether it’s Dr. Joey DeGruy, who talks about posttraumatic slave syndrome; or Dr. Shakti Butler, who does a couple of films that deal with race, including one that focuses specifically on racial inequities, and it has a whole bunch of folks in the film that are considered racial justice people; or whether or not it’s, you know, the type of conversations that are taking place in churches all around the country on a daily basis. So I think there were points that he could have highlighted and said, let’s do more of this, here are some key examples. But he just pretty much said, I’m not going to have this conversation. He bounced out of the room and left people kind kind of to their own devices.

Really what’s going on with–there’s a couple of things. The president’s main role should be to push policy. And the fact that he’s not even doing that is problematic to me. I mean, here’s a guy who talks about the fact that he was being profiled and followed around. In one breath, he has people cheering, and then in the next breath, he’s sitting there praising somebody like New York Police Commissioner Raymond Kelly, who’s the head of stop and frisk, which is all about following people around, which is all about furthering suspicions, which is all about profiling, which is why he even had this conversation in the first place. It was because Trayvon Martin, a 17-year-old, was seen as suspicious, he was followed, he was profiled, and he wound up dead. So the president needs to at the very least say, these are new policy changes that I will absolutely be pushing. In fact, I’m not going to push them; I’m going to have zero tolerance on the type of things that black and other Americans have found problematic for a very long time. So to me he just kind of kicked the can down the road.

And we’re still going to have these conversations on race. Those never stop. The only–the challenge is that people who are doing this work are now kind of stuck because the president is not really pushing for particular policies. He’s not highlighting the solutions that people have offered. And so we’re left with this understanding that we’re going to now have this conversation. The question is: with who? Is it going to be Al Sharpton? Is he going to be the person now? Or are we going to have a big speech? We’re going to have a panel discussion on C-SPAN? Or are we going to really dig in deep and build off of what’s already been started?

DESVARIEUX: Okay. There are some that are claiming that the conversation is now over. There’s an interesting column in Politico by Roger Simon, and the headline is “Race talk over. Problem solved.” How do you think those in the mainstream press have been covering the Trayvon Martin case, and particularly this whole race issue? And some people are sort of feeling like, oh, the president has spoken, now the conversation is over and we can move on from race now in public discourse. What is your impression of all this?

DAVEY D: Well, the only people that I know that would say that the race question is over and they want to move on are usually political enemies to the president, so they don’t like anything that he’s doing, and people that have a racial axe to pick, so to speak, and don’t want to have the conversation. So I don’t really give them a lot of credit and I don’t really pay too much attention to them. I think the conversations about race are always ongoing, even when you feel there’s racial harmony.

Me, I feel like I’m a forward-thinking person, and I’m constantly having to re-energize the type of relations I have with people from different ethnic backgrounds. I’m talking about stuff that goes beyond friendships. But how do you align yourself? How do you be a support for people who are facing challenges that are based upon race? So if I’m African American, how do I support my Latino brothers and sisters who find themselves on the front line in an immigration debate that is racially charged? How do I find myself on the front–how do I re-energize my relationship with, say, Middle Eastern Americans who may find themselves on the front line in terms of being seen as terrorist or potential terrorist and are also be surveilled? And the list goes on and on. And vice versa. They need to reinvigorate the relationships they have with the African-American community. So that’s an ongoing discussion and an ongoing work in progress.

But with respect to people who say that it’s time to move on, I think that’s a privileged type of position that you can take. It means, like, you’re not affected by these day-to-day going ons and challenges that people have, so it’s no big deal for you to say, let’s close up shop and keep it moving. And I would just say to folks that sooner or later that problem will be at your front stoop, so it’s better to deal with it now, it’s better to engage people as they’re engaging in it now and be a part of a larger global community that is dealing with race head-on versus putting your head in the sand.

And I say that very deliberately. If you look around the world, you see that race is a global problem. It is something that’s happening in all sectors of the world. And so we might as well really deal with it head-on. And if you don’t want to, then stand out the way.

DESVARIEUX: Thanks so much for joining us, Davey D.

DAVEY D: Thank you. Thanks for having me.