Dr. Carol Paris, president of Physicians for a National Health Program, says the Republican failure to repeal Obamacare has energized the movement for universal health care

Dr. Carol Paris, president of Physicians for a National Health Program, says the Republican failure to repeal Obamacare has energized the movement for universal health care 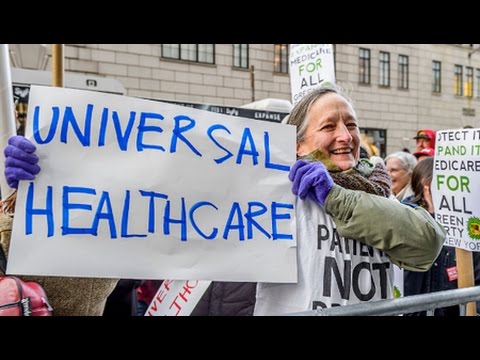 DR. CAROL PARIS: Don’t just be satisfied with defeating Trumpcare. Set your sights on creating real Medicare for all.

AARON MATÉ: As we continue our look at what happens next, after the failure of Trumpcare, we’re joined now by Dr. Carol Paris, President of Physicians for a National Health Program. Dr. Paris, welcome.

AARON MATÉ: So, tell us your response to the failure of this repeal of Obamacare.

DR. CAROL PARIS: Well, as we know, the failure of the AHCA is actually a big win for the American people, who came out very, very strongly at town hall meetings across the country. To make it known that they very much, at least don’t want to lose the gains that we’ve gotten from the Affordable Care Act. But actually, my experience with these town hall meetings is that whenever someone got up and said, “How about if we have a national health program like Medicare for all?” the town hall would explode in applause.

So, I think there are two messages here. I think that the demise of the AHCA is testimony to the power of the people to make their wishes known. And I think one of their clear wishes is that we actually go forward from the ACA, and pass a national health program.

AARON MATÉ: But let me ask you, on the issue of taking this as a win for the power of the people. I mean, isn’t it true that it was the Freedom Caucus that killed this bill? And their complaint was not that it didn’t cover everybody. Their complaint was that it covered too many people. They wanted to even strip away essential health benefits. So, can we really take this as a grassroots victory, when it was this far-right insurgency that defeated this bill?

DR. CAROL PARIS: Yes indeed, it was the far right that started the ball rolling. And I don’t doubt that they deserve the majority of the credit. But, as we got to the 11th hour, you saw more and more moderate Republicans falling away. And those were the people that were falling away because they had heard from their constituents at town hall meetings just how clearly their constituents were not in favor of this draconian change to the Affordable Care Act.

AARON MATÉ: Okay, so the question now is what next? What do you think Democrats should do? There are some saying it’s time for a Medicare for All push. Senator Sanders has said he’ll introduce legislation along those lines. Others though say we should be more modest; achieve something realistic, push for a public option like what happened… failed to happen, but was tried to happen in 2009, 2010, when Obamacare was passed.

DR. CAROL PARIS: Well, I’m sure you can find people who will say that we should be more moderate. And I am not going to be one of those people.

When I was advocating for a single-payer Medicare For All in 2009, we were told support the ACA now, and we’ll get to Medicare for all later. And PMHP was very clear that that was the wrong way to go. But the Affordable Care Act was passed and we have spent the last seven years pointing out the very many flaws of the Affordable Care Act. And so, anyone now who says that we should be more realistic and just go for a public option, what I’m really hearing them saying is, “Let’s just keep pumping money into the private for- profit insurance industry and we’ll get around to single-payer later.”

And then if that public option doesn’t make it, if it fails because it’s full of too many sick people, what I’m afraid of is the people are then going to say, “Well, see? Single-payer doesn’t work.” And that would be a very erroneous conclusion to draw. So, I don’t agree that we need to slow it down and pass a public option.

AARON MATÉ: But I could see someone making the argument, well, given that single-payer has such a higher obstacle of passing Congress, who can’t even pass the Trumpcare measure that would take away healthcare, our best bet is to go for something in the middle. And we shouldn’t sacrifice those who would be covered under a public option for the sake of achieving this idealistic single-payer. What’s your response to that?

DR. CAROL PARIS: Well, my response is if that’s the way the Democrats choose to go, then I want to be very clear, and I want them to be very clear with the American people, that a public option is not the same thing as single-payer.

AARON MATÉ: And what about other modest proposals like Senator Sanders has also mentioned dropping the Medicare age from 65 to 55. Is that a good proposal?

DR. CAROL PARIS: That would be perhaps modestly better but not if he’s only going to drop the Medicare… we’re not… I’m not sure right now whether he’s saying everyone at age 55 will be automatically enrolled in Medicare. Or whether he’s saying between 55 and 65 — that’s the age range where people will have the option of the public option. So, if they’re going to enroll everybody 55 and over in Medicare, that may be somewhat better in terms of the possibility of it being into affordable for the people enrolled.

AARON MATÉ: So, on that point, Obamacare which is still the law of the land, much to Republican’s dismay, very much preserves the for-profit system. When President Trump says that he’s going to let Obamacare implode on its own, does he have a point do you think? Is that a reasonable prediction?

DR. CAROL PARIS: I think it is a tragic reasonable prediction. And I say tragic because what it really means is that more people are going to suffer at least financial hardship if they get ill. Many more will suffer bankruptcy and tens of thousands more will die. So, I think it’s tragic.

But I think that that ultimately what we’ve been saying all along is that the Affordable Care Act is unaffordable and it’s becoming more unaffordable year after year. The unaffordable and, frankly, more and more of the insurance companies are leaving the exchanges because they’re not making enough money. And what’s left are plans that are so skimpy, and have such narrow networks, that they’re really not meeting the needs of the people who are purchasing them.

DR. CAROL PARIS: Our message is that the single-payer, improved Medicare for All, is really a — not only can we argue it from the social justice healthcare is a human right — but we actually have plenty of good evidence that, from a strictly conservative fiscal standpoint, if what the President wants is to reduce the deficit and achieve the goal of universality, and better benefits, and more affordability — single-payer is the way to go.

AARON MATÉ: And in fact, someone who’s voiced that opinion or at least he favors that opinion is President Trump himself. I want to play you a clip. This is Congressman Ro Khanna of California. And during the debate over the repeal of Obamacare, he cited Trump’s own words.

RO KHANNA: In 2000, he wrote and I quote, “The Canadian-style single-payer system in which all payments are made for medical care are made to a single agency, helps Canadians live longer and healthier than Americans.” The President thought that a single-payer system was the only way to live up to its promises. What he ought to do is work with Senator Sanders for Medicare for all, if he’s serious about living up to any of the commitments he has made.

DR. CAROL PARIS: Well, that would be one of the five times that President Trump, during his run up to the presidency, actually said that he supported a national health program. At various times, he referred to the Canadian system, and also to the system in Scotland. And I think in Scotland he even gave an example of a friend of his who got sick while golfing with then Mr. Trump on the golf course, who ended up in a hospital in Scotland. And Donald Trump was commenting on what good care he got.

I don’t think this is something that would reach the President as new information. I think he actually understands it better than he lets on now.