The failure of neoliberalism in addressing the coronavirus crisis is not limited to Sudan. It is a global failure.

The failure of neoliberalism in addressing the coronavirus crisis is not limited to Sudan. It is a global failure. 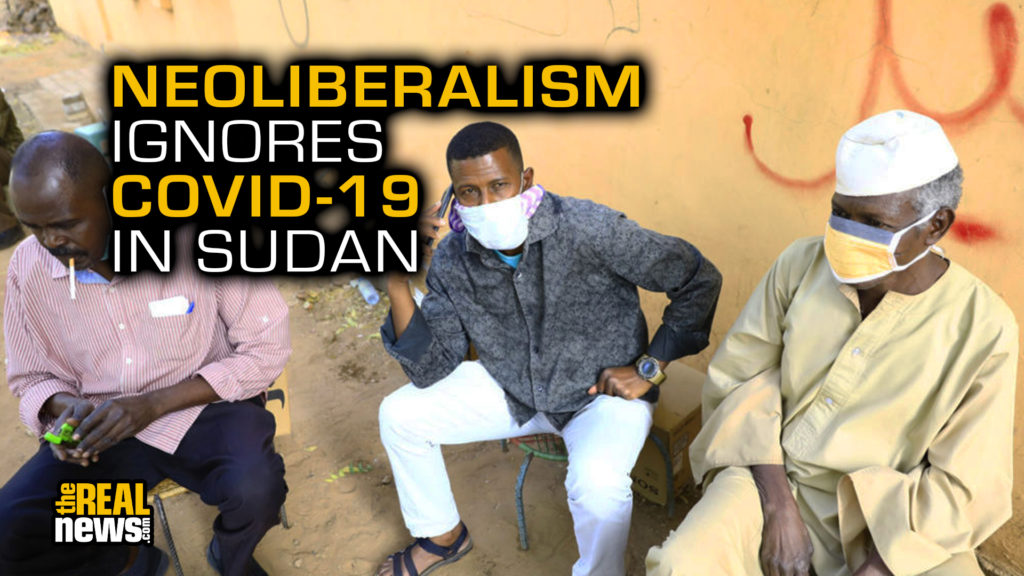 This is a rush transcript and pay contain errors. It will be updated.

Jaisal Noor: Welcome to the Real News. I’m Jaisal Noor. It should come as no surprise, the Coronavirus outbreak will magnify the gulf between wealthy and developing countries. As COVID-19 spreads in Africa, healthcare systems in countries like Sudan are being pushed to their limits. A government-ordered curfew has entered its second week, but a lack of food medicine and protective gear has prompted hundreds to escape from quarantine centers. Sudanese have been forced to produce their own supplies like hand sanitizer.

Speaker 2: There is an increase in the prices of the hand sanitizers, and we try to do that by giving it for free. We are targeting the people who are compelled to work outdoors, and the health workers as well as the patients, the hospitals and their relatives.

Jaisal Noor: Well now joining us to discuss this is Khalid Ahmed. He teaches political science at the African Studies Department at the University of Toronto. Thanks so much for joining us.

Khalid Ahmed: Thank you for having.

Jaisal Noor: So give us the latest on the situation in Sudan right now.

Khalid Ahmed: So far we have six confirmed cases in Sudan and it seems that it hasn’t spread as much as people were afraid of. But it’s a good sign.

Khalid Ahmed: That’s actually the key question, because in my view what’s really happening is that lack of enough testing facilities, there is only one testing facility that was provided by the WHO for the whole Sudan. And what is happening on the ground also is that people who work on contact with these six people who got infected, not all of them were gathered and tested to make sure that they’re free of the virus. So it’s unknown exactly how many people, but the confirmed one, the government’s version of the story is that only six have been confirmed. How many are actually infected with the virus but not known to the government is unknown at the moment. And it’s very hard to tell.

Jaisal Noor: Can you talk about your sense, your evaluation of the healthcare system? Because we know that once there’s one case, we know that’s going to spread. And we know that countries like Sudan, the developing world is going to be more at risk of the effects of this compared to even Europe and the US, where we’ve seen really catastrophic impacts already.

Khalid Ahmed: I think this is the most important question that we need to consider. And to put it in a context what really happened in Sudan in the past 30 years, it’s very important to what’s happening today. In the past 30 years, the former government, the dictatorial government, the NCP had literally [inaudible 00:03:13] the healthcare services in Sudan. And of course, as many people know, that it followed the new liberal approach to development and to governance and the healthcare system. So it really sold off many hospitals and closed down many hospitals and [inaudible 00:03:28] them. And what’s ironic is that they have actually, the Minister of Health himself has two private hospitals. So there’s a conflict of interest there too. And many of the hospitals that they sold off, they sold them to their own members of the party, because they were in geographically important places in the capital. So they kind of looted these hospitals in favor of their own political parties.

And another very problematic issue here that we need to consider is that all the hiring in the Minister of Health, during the 30 years of the former government was based on loyalty to the NCP. It wasn’t based on merit, it wasn’t based on the ability of the person and the capacity of the person to provide services. So it was solely a kind of family affair for those in the NCP to bring all the people that they know and it’s [inaudible 00:04:25]. And that cost really good doctors and administrative personnel to leave Sudan, and left the Minister of Health in ruin.

As such, the previous government of Sudan minimized the role of the state in providing healthcare services to its people. And that was felt in the indigenous population. To a large degree, many people couldn’t afford the cost of healthcare. Many people died out of the mal-management and misdiagnosis because of the quality of the doctors and the people that they brought over and the nurses and so forth. It was devastating.

So what this current government inherited really is a disastrous Ministry, a healthcare system that is completely mal-managed. It lacks resources, financial resources as well as human resources. It lacks the capacity to really provide the services. But despite that, this government has tried to do what it can in a preventative way. So all the preventative measures, they have done it appropriately. To be more specific, what they’ve done is that they have immediately, as soon as the first case was announced and discovered, they locked down all the boarders and entry points, and they set up a quarantine place, a space. Of course, I can talk about some of the problems that face these quarantine places, but it started testing Sudanese returning home. To my knowledge, that you will go through three different screening before you leave the airport if you’re coming back.

But the key point is there were all volunteers working there. The Ministry itself does not have the capacity necessary, the human necessary to really conduct and to uphold these preventative measures.

Jaisal Noor: Now we’ve seen that even in the US, the birthplace of neoliberalism, this crisis has really shown its failures, its inability to serve the people. And we’re talking about the wealthiest country in the world over here, and it’s been a complete disaster between mismanagement on Trump’s level, downplaying it for his own political reasons. And then it’s really shown the healthcare system being pushed to a brink.

And we have a movement here to push back on neoliberal healthcare reforms to have single payer, which a majority of voters in the democratic primary actually have supported, even though they haven’t supported the candidate who supports that idea. But talk about the situation in Sudan. Is there a movement that’s sort of pushing back on these reforms and thinking, look, we need to have a different path. We need to invest in these vital resources, so we have them when they’re needed. And as you said, it’s already caused suffering for people even before this crisis.

Khalid Ahmed: Well as you just alluded to, neoliberalism is based on minimizing the role of the state, and reducing it to really just a regulatory institution, as opposed to its historical role to provide services and care and make sure that the welfare of its citizens is provided at the highest level. Neoliberal is all about profit.

Now what it also did, whether it’s in the US or in Sudan, is that the government, at the time in Sudan spent more money on security and providing armaments and military equipment to maintain its grip on power, at the expense of the healthcare system, and education system and other services that there were supposed to really take care of.

So now what’s happening is that when this government inherited this disastrous situation and these disastrous institutions, what it had to rely on, the push back, is the civil society. So now civil society organizations are picking up the path. They’ve, for example, started cooking meals for those who are in quarantine right now.

Hopefully this will continue, but this current government doesn’t have the capacity to really change anything at the moment because it’s just new, and it also lacks the resources to start establishing, for example, a stronger public healthcare system. But people are becoming aware and more aware of how devastating the privatization that was taking place in the healthcare system in Sudan. And they’re taking it upon themselves right now really to try to change that.

Jaisal Noor: Yes. And that really speaks to how many of these struggles are universal. And so it’s good to learn about the same struggles in Sudan just like we’ve been talking about in the United States and right here in Baltimore. Khalid Ahmed, thank you so much for joining us.