The concept of “loss and damage” and carbon markets are a sticking point at the UN's climate summit, and protests are continuing in Chile, the original site of the talks. Oxfam’s Nafkote Dabi and Gary Hughes of Biofuelwatch discuss the realities of COP25.

The concept of “loss and damage” and carbon markets are a sticking point at the UN's climate summit, and protests are continuing in Chile, the original site of the talks. Oxfam’s Nafkote Dabi and Gary Hughes of Biofuelwatch discuss the realities of COP25. 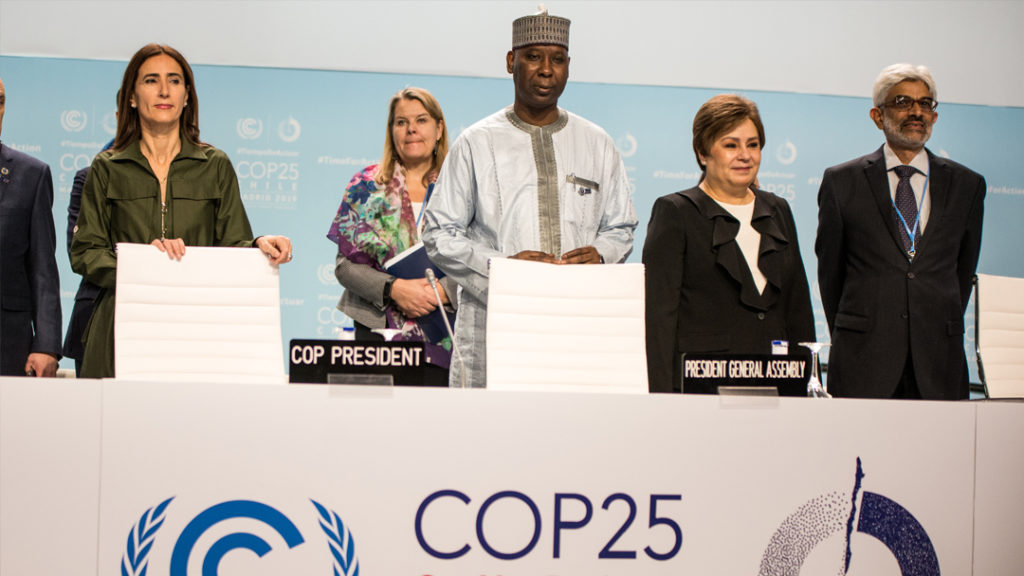 DIMITRI LASCARIS: This is Dimitri Lascaris reporting for The Real News Network from Toronto, Canada.

The United Nations climate negotiations in Madrid, Spain have reached a standstill, with the issues of loss and damage and market-based solutions to the climate crisis serving as major sticking points among participating nations. As a result, civil society groups representing impacted communities and their allies have begun protesting at the conference. As a gift for their activism, many have been banned from entering the conference premises. Think of loss and damage as comparable to reparations for paying back those who are and will be hurt the most by the impacts of climate change. The primary victims of the climate emergency are generally among those who contributed the least to that emergency.

In a speech given at a press conference on the sidelines of the climate negotiations in Madrid, youth climate activist Greta Thunberg summed up the importance of the issue.

GRETA THUNBERG: Countries are finding clever ways around having to take real action like double counting emissions reductions and moving their emissions overseas, and walking back on their promises to increase ambition or refusing to pay for solutions or loss and damage.

DIMITRI LASCARIS: And yet the notion of loss and damage is just one component of grassroots opposition to what’s going on in Madrid. The other part is the elephant in the room: The conference was not supposed to have been held in Spain to begin with; it was originally slated to take place in Santiago, Chile. Street protests too have broken out there. They have continued now for nearly two months straight, and radical action on climate change is one of the demands coming from the streets.

Here to break all of this down for us are two guests. Nafkote Dabi is Oxfam International’s Climate Change Policy Lead. And joining us from Santiago, Chile is Gary Hughes, the California Policy Monitor for the group Biofuelwatch where he focuses on forests, climate change and energy matters. Thank you both for joining us today.

GARY HUGHES: Thank you so much for having us. It’s really an honor to be with The Real News Network.

DIMITRI LASCARIS: So Gary, let’s start with you, since you’re coming to us from the place where this conference was supposed to have happened in the first place. And I understand you had already booked your ticket there before it moved to Madrid. Could you explain both a public explanation for why the venue has shifted for this Global Climate Summit and then what your own research on the ground has revealed about the actual rationale for the move?

GARY HUGHES: Well, it’s very clear that the Chilean government and the United Nations–in particular Patricia Espinosa, as the secretary of the process that the United Nations is carrying forth around climate change–decided to move this meeting to Madrid to protect the regime of president Sebastián Piñera because of the human rights violations that are happening here in the country. So they may blame it on the uprising in the streets, but the reason why they moved the meeting was to really take the eyes of the world off of what’s happening in Chile. The other reason why–

DIMITRI LASCARIS: Sorry, Gary. Could you elucidate a little bit on the nature of the human rights violations that are occurring on the streets?

GARY HUGHES: Yeah. Well, one of the most shocking and really heartrending human rights violations that has been brought to the public’s attention here in Chile and that we’re trying to get the world to pay attention to has been this systematic and purposeful approach of the Carabineros, the police here in Chile, to have been shooting at protesters in the face with these crowd control shotguns. And at this point, more than 350 people have lost vision and at least one of their eyes. And there’s two people in particular who have lost vision in both of their eyes. So this is really something that seems to not be of importance to the United Nations in terms of organizing this meeting in Madrid. But here in Chile, really it’s an important metaphor that you may blind us with your violence, but we are not blind to your manipulation of this situation.

DIMITRI LASCARIS: So now of course, the loss and damage has long been a central demand of climate justice advocates and representatives from both the Global South and Island States. And though the United States has refrained from participating in the conference under climate change, denying president Donald Trump, the country has said it will fight these countries on this issue. What exactly is loss and damage? And what makes it important from Oxfam’s perspective? And please tell us a little bit more about how this has played out in Madrid in the negotiations, and what to look for as the summit comes to a close.

NAFKOTE DABI: Loss and damage refers to any harm, any disaster that communities, the ecosystem, is unable to adopt. And we have insane extreme weather events such as sea level rise, droughts, flooding, affecting communities, driving them out of their homes, affecting their lives and their livelihoods. So this is actually a matter of survival, especially for small islands. And the climate crisis, as we know, it shows the injustice of the crisis in terms of who’s creating this climate crisis. Oxfam has shown in 2050, for instance, that 10% of the richest are the ones who are contributing to 50% of an emission, while 50% of the poor are contributing to 10% of an emission. And who’s paying the highest price? poor countries. So mostly damage is anything beyond mitigation, anything beyond adaptation, when communities are unable adapt. So sea level rise, for instance, is affecting communities in the Pacific; it’s driving them out of their homes. What’s next?

And on the issue of finance, now they have reached a stalemate. And this is the only international mechanism we have at COP. So we’re really hopeful that something positive will come out of this; because yes, this is important for developing countries. Without this, what would happen to communities… What would happen to them? Especially communities in the Pacific. Like today, one of my colleagues was making a presentation. And she was showing the impact, the trauma that communities are going through, including herself. She’s in Madrid following negotiations and she’s worried about her daughter and her mom back home. What’s going to happen to them in case a hurricane happens, like in 2016? So this is an everyday existence issue, and this is why it’s important for Oxfam to address this issue. We’re seeing our communities are struggling throughout the world.

DIMITRI LASCARIS: So Gary, a few moments ago I mentioned the fact that some of the demands be made from the streets in the protest in Chile are related to the climate crisis. Can you give us some more insight into what specifically those climate related demands are?

And one of these examples is the ongoing expansion of the monoculture tree species plantation model for the production of pulp, wood products, and bioenergy in the South of Chile; and how the UN process, and in particular the carbon offsets platform of the United Nations, is allowing contaminating industry to continue to expand their model under the guise of responding to climate change. The Chileans see through these market based scams. And that is really another reason why the United Nations abandoned Chile right now, because the knowledge on the street about the dangers of the neoliberal market is very, very high. And that is the last thing that the United Nations needs, is that a mobilized public is exposing their market-based schemes for being the danger that they are to vulnerable communities.

DIMITRI LASCARIS: So Gary, you mentioned market-based mechanisms or how to deal with the climate crisis. Can you talk to us more about the issue of global carbon trading markets and how that too has been a sticking point between the countries on the front lines of the climate crisis. And why have you in particular been an advocate against carbon markets and schemes of that sort?

GARY HUGHES: Well, we can go back again to the example of the plantation forestry model that we’re speaking of. The idea, for instance, that planning grand and large expansions of monoculture exotic tree species plantations can actually be considered a natural climate solution, where these plantations somehow are going to magically scrub the atmosphere of the emissions from burning fossil fuels. The Chileans here are fully aware of the environmental damages, the cultural losses that are associated with these plantations and with the attacks on indigenous sovereignty. So when the United Nations starts trying to sell to the world, the idea that expansions of the plantation model is actually a viable response to the global climate crisis, people see right through that immediately.

And thus, this whole idea somehow that we’re going to be able to magically trade our way out of the climate crisis because of the design of new mechanisms for trafficking and carbon credits is viewed here in Chile with more than just skepticism. It’s the kind of thing that gets people to laugh uproariously at the absurdity of it. And, and really it is time that the United Nations corrects course. So whether that will happen or not this year, remains to be seen, but clearly this idea that somehow more business as usual is what we need to respond to the climate crisis, is not really in touch with reality at all.

DIMITRI LASCARIS: Well, we’ve been speaking to Gary Hughes and Nafkote Dabi about COP25 and protests in the country where COP25 was originally scheduled to occur, Chile. And I thank you very much, both of you, for joining us today.

GARY HUGHES: Well, Dimitri, thank you so much for making this happen.

DIMITRI LASCARIS: And this is Dimitri Lascaris reporting for The Real News from Toronto, Canada.