Organizers held actions in New York to say that though their CEO claims to be environmentally conscious, BlackRock contributes more to climate change than almost any other company on Earth

Organizers held actions in New York to say that though their CEO claims to be environmentally conscious, BlackRock contributes more to climate change than almost any other company on Earth 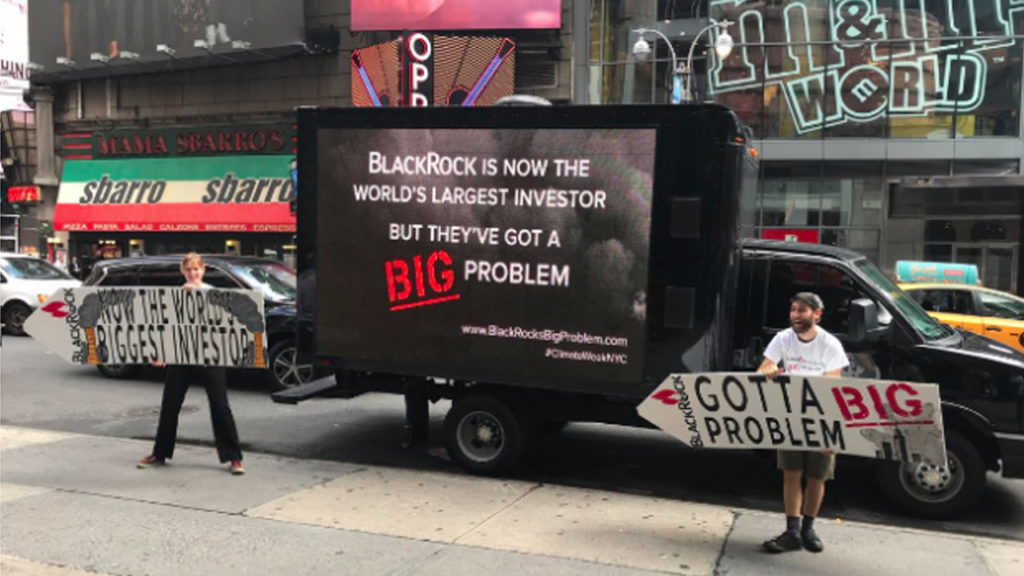 CLARA VONDRICH: BlackRock is one of the most important companies you’ve never heard of. With $6.3 trmillions in assets, it’s the largest asset manager in the world, and it’s also one of the biggest funders of climate destruction worldwide.

CASEY HARRELL: Basically, if you have a publicly traded company, BlackRock is most likely your number one, two, or three shareholder, anywhere around the world.

CLARA VONDRICH: We really believe that investors, with their trillions in assets, have the power to make or break the future.

VIDEO: At an asset managers meeting, and then outside BlackRock’s NYC headquarters, activists spread the word.

LUKAS ROSS: We also can’t talk about addressing the fundamental human rights and humanitarian crisis of our time, climate change, unless we’re willing to take on behemoths like Blackrock head on.

VIDEO: Earlier this year, BlackRock CEO Larry Fink shook the corporate world when he said capitalism must change to avoid climate catastrophe. But activists say BlackRock itself has to make big changes.

CASEY HARRELL: And that’s what this campaign’s about. It’s sort of highlighting the duplicity between words and actions between what BlackRock and Larry Fink say and what they’re doing.

VIDEO: And their demands of Fink and Blackrock are bold.

CASEY HARRELL: We’re also asking BlackRock to align its investments with the Paris climate agreement, something that many other investors are in the process of doing.

VIDEO: We reached out to BlackRock for response. They said:

“BlackRock has invested more in renewable power projects than virtually any other asset manager in the world,” and “Third-party index providers determine which companies to include in the indices they create.”