Chicago's UNITE HERE union is engaged in one of the largest labor actions in the city in decades, for a new contract for service workers at 30 hotels, with simultaneous strikes at 26 of these. We speak to the Local 1 strike captain

Chicago's UNITE HERE union is engaged in one of the largest labor actions in the city in decades, for a new contract for service workers at 30 hotels, with simultaneous strikes at 26 of these. We speak to the Local 1 strike captain 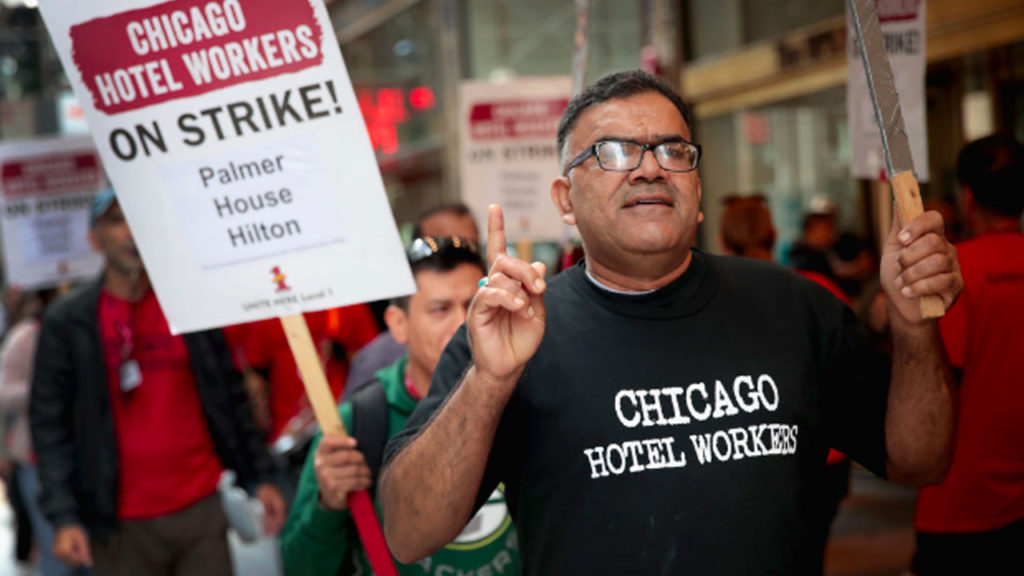 GREG WILPERT: It’s The Real News Network, and I’m Greg Wilpert coming to you from Baltimore.

Workers at 26 Chicago area hotels have been on strike for almost two weeks now. This is one of the biggest such actions in over a decade in Chicago, and could have ramifications far beyond the city. The union UNITE HERE organized the strike in a coordinated effort when contracts at 30 hotels had expired. Workers are not only demanding wage increases, but also safer workloads, increased sick days, and improved job security. One of the main demands, though, is to win year-round health insurance.

Joining us now from Chicago is Q Rivers. She’s UNITE HERE Local 1 strike captain, and has worked at the Palmer House Hilton for two years. Thanks for joining us today, Q.

GREG WILPERT: So first of all, tell us about why you are on strike. What have your working conditions been like, and how would you like to see them improve?

Q RIVERS: Well, as far as me, my working conditions, in a slow season I get laid off. And when it’s hot outside I’m working six days, I’m working without a break sometimes, without even able to take a lunch break. So it’s horrible. The work conditions are horrible. Then once they’re done with us they just lay us off for three or four months at a time.

GREG WILPERT: And so what are you demanding now in this, in this particular strike action?

Q RIVERS: Well, for me, I’m demanding year-round health insurance. Being a diabetic, it’s very important to me that I have my health insurance year round, and not just while I’m working.

GREG WILPERT: So tell us a little bit more about why health insurance is such an important issue, not just for you, but I mean, in general. I mean, what is the issue about year-round health insurance? Why is that a problem?

Q RIVERS: Because the people with the lower seniority in hotels, when they get laid off their health insurance is cut. And everyone knows in the cold season, that’s when all the colds come, flu, and everything. So people need their health insurance. So if you’ve been there like myself, for two years, which is a long time, if you’ve been there for two to three years, you lose that health insurance. So you can’t see your doctor, you can’t get the proper medical care that you need. So that’s why, that’s why it’s a big thing. Because it’s not fair that- the hotels are busy. They tell us they’re not busy, but they’re busy. So they have work for us to do, but they still choose to lay us off, which puts us in a bind. And it’s not just us, it’s our family. We have our spouses and children on our health insurance, and then they’re missing out. So that’s why it’s important to everyone.

GREG WILPERT: And is there anything you can tell us about the status of the negotiations? I mean, is the union and the hotel management, are they coming to any kind of agreement? Or do you think that this will, this action will last a long time longer?

Q RIVERS: I hope it don’t last any longer, but I’m not sure. I don’t have any details about the negotiations. I’m just here on the picket line with my coworkers fighting for the greater cause. I don’t know anything about the negotiation. But I hope they come to something soon, but if not we’re going to be out here until they do.

GREG WILPERT: And how did the action come about? Was it easy or difficult to mobilize workers at so many hotels? And what has participation been like, are people respecting the picket lines?

Q RIVERS: Oh yeah. People are, they’re respecting it. It wasn’t easy. It’s never easy when you have to gather 26 hotels together and all the employees, because people have bills, and they’re scared. So it is never easy to get them together, but we did it. We get everyone, the majority of everyone is out here. We’re fighting for this. And everyone is still standing strong, we’re sticking together.

GREG WILPERT: And what do you think is the larger significance of the strike? I mean, what lessons do you hope workers at other hotels and other service sector workplaces might learn from the strike?

Q RIVERS: That you don’t, don’t just settle for what they’re giving you. There’s always more to offer. You’re worth more than just what they’re just trying to give us, the bare minimum. So I hope people just understand that even though it’s hard and you’re scared, you have to stand up for something.

GREG WILPERT: One final question. I understand that at one of the hotels, the workers we’re being told that they could be fired if they strike. Do you know anything about this? And if so what- and they in the end voted for, in favor of the strike, when they found out that that wasn’t true. Could you tell us a little bit more about what happened?

Q RIVERS: That was just rumors that the boss was throwing around to scare people. Because a lot of the minorities there, they’re still in the immigration process, or however it goes. So they just threw that around to scare them. But they found, when they found out you can’t be fired for striking, they’re out here with us.

GREG WILPERT: OK, great. Well, I wish you good luck. And we’re going to continue to track this. I was speaking to Q Rivers, UNITE HERE Local 1 strike captain. Thanks again, Q, for having joined us today.

Q RIVERS: Thank you. Have a good one.