Adjunct professors represent 75% of college instructors. This week, they are organizing events in 25 states.

Adjunct professors represent 75% of college instructors. This week, they are organizing events in 25 states. 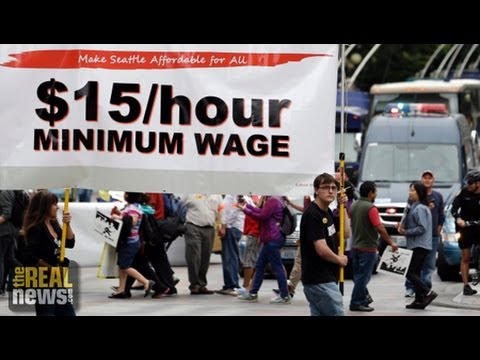 Academia is not usually considered a low-wage field, but adjunct professors around the country are organizing for higher pay and better working conditions like retail and fast food workers have been doing for the past year.

The debate about the role of adjuncts has received increased attention since the death of an adjunct professor, Margaret Mary Vojtko. Vojtko suffered from cancer and high medical bills and taught French for 25 years. She earned roughly $10,000 a year without health insurance. Following the university’s decision not to renew her contract, Vojtko died of a heart attack on September 1.

With us to discuss the plans to organize events in 25 states next week is Craig Flanery. He’s the national coordinator for both the New Faculty Majority coalition and Campus Equity Week, and he has been a temporary faculty member in California for 14 years.

Thanks for joining us, Craig.

CRAIG FLANERY, NAT’L COORDINATOR, NFM/CEW: Thank you for having me, and I appreciate your covering this important story.

DESVARIEUX: So, Craig, just off the bat, a really, for me, just shocking statistic: according to NPR, 75 percent of college instructors are adjuncts. When did this all begin? And can you explain how adjuncts’ working conditions differ from full-time professors’?

FLANERY: Sure. And you’re absolutely right with that 75 percent figure, which is in fact now over 1 million college instructors who are what we call contingent faculty, part-time and/or temporary.

This situation began back in the 1970s soon after the economic recession of 1973, when the federal government and state governments started reducing funding for public higher education in particular, eventually with consequences, similarly, for private institutions too. And over the last 35 or 40 years, we’ve had waves of defunding higher education, reducing the amount of funding that went for instruction and hiring faculty. And every time there was a wave of cutbacks, about every eight or ten years, the way college and university managers responded to that was by hiring fewer and fewer tenure-track job-secure faculty and replacing them increasingly with contingent faculty working at much lower salaries, typically without health benefits or retirement benefits, and at average incomes that now are around just $29,000 a year around the country.

DESVARIEUX: Okay. And I guess the counterargument to all this, you know, if you’re–I mean, $29,000 a year, I mean, that’s very hard to survive off of, especially if you’re living in an urban environment.

But I guess my next question is really more about the counterargument. I’m sure people say that if you are paying teachers and professors more, essentially you’re going to have to raise tuition. What do you say to that argument?

One of the things that the U.S. government and state governments have always been able to figure out is how to fund whatever their priorities are. If higher education is a priority, both for the society generally and for the economy, then they don’t have problems coming into the money to fund it appropriately.

DESVARIEUX: And you also have some schools who are just trying to attract more students. And I read somewhere, you know, people have sushi bars and certain plans for spas and things of that nature. So I guess your point would also be that the schools do have the funds. It’s just where they would want to put the money.

FLANERY: Yes. It’s frequently a matter of the priorities at the campus level. And increasingly colleges and universities are competing for higher-income students who can pay more in tuition, who can pay for more extravagant dorms, who can pay for services like sushi bars that you mentioned, spas, and expensive gyms and health services on campuses. And so they’re really spending their money competing on higher-income students, which especially disadvantages those institutions (which are the majority) serving lower-income populations and students who are first in their generation to go to college.

FLANERY: Sure. And part of this has to tie in to Margaret Mary Vojtko. I’m not sure if you mentioned this, but when she died, she actually died in poverty after a career as an instructor in which she received very good evaluations. No college instructor should be living in poverty, much less dying in poverty.

And that’s really galvanized a lot of faculty and students and staff around the country at college campuses to create activities during next week’s Campus Equity Week to shine a spotlight on the various kinds of inequities that are happening on campus and undermining student learning. So there is a petition around the Margaret Mary Vojtko circumstances that a lot of campuses are gathering signatures for, to try to pressure Duquesne University in Pennsylvania to improve the teachers’ teaching conditions there, their working conditions, in part by allowing their faculty to continue pursuing unionization, which is something that they’re seeking there.

At other campuses, there is a focus on student debt this year, student debt now being over $1 trillion–again, largely a consequence of the same kind of defunding that has generated the shift from better-paid tenure faculty to poorer-paid contingent faculty. And this year we have more than 150 events planned around the country at more than 100 institutions. And in fact there are activities on more than half the states in the country. And as far as I know, this is the first time in several years that there’s been this kind of national movement going on, and much of it is a response to the recognition among faculties, students, and staffs that these different kinds of inequities are in fact interrelated.

So one of the main goals of this year’s Campus Equity Week is to build the kind of coalitions that can put pressure on elected officials and on college and university administrators to restore funding and develop the appropriate priorities for providing high-quality, wide-access student learning and improve the working conditions of those who are teaching those students in those learning conditions.

DESVARIEUX: Alright. Craig Flanery, thank you so much for joining us.

FLANERY: Thank you very much for covering this.

Craig Flanery is this year's National Coordinator for Campus Equity Week and the New Campus Majority Coalition. He is also a contingent faculty at Laney Community College in Oakland, and has taught at California State University, Los Angeles for 13 years, the University of California, Irvine for 5 years, and Moorpark Community College (in Los…