Brazil’s Bolsonaro: ‘Exterminator of the Future’

“[There is a] massive wave of illegal incursions throughout the Amazon on two formerly protected lands by loggers, miners, agribusiness interests who are emboldened by the rhetoric coming out of the government, where they just feel like the laws won't be enforced,” Zaitchik said. “The agencies that have been empowered to protect what's what's left of the Brazilian Amazon—and again, we've already lost a fifth of it—are being held back. They're being defunded. They're being reshuffled, put under hostile ministers.”

Zaitchik detailed some of the effects on environmental agencies and infrastructure under Bolsonaro. Ibama, Brazil's Environmental Protection Agency, has lost nearly a quarter of its funds. The conservation agency ICMBO is being staffed by right-wing police officers, and all of its scientists have been fired. The Indian agency FUNAI, which assists Brazil's Indigenous groups, has had 90 percent of its funding withheld. Zaitchik added that what is happening in Brazil is similar to the U.S. under Trump, “where the scientific community is sort of seen as a hostile force.”

The role that the international community plays in terms of influencing Bolsonaro environmental policies will become increasingly important, just as it was in the '90s when Brazil's military dictatorships ramped up deforestation.

“A lot of the Indigenous leaders are going abroad, trying to raise the alarm about what's happening, and you know, they're meeting with government officials. And the governments of Asia and Europe and North America are going to be crucial in making sure that another 20 percent of the forest is not destroyed by the policies that Bolsonaro is putting in place right now,” Zaitchik said. “Scientists tell us that another 20 percent risks triggering this feedback loop called 'dieback' in which the forest will simply collapse, and its systems will no longer be able to sustain themselves.” 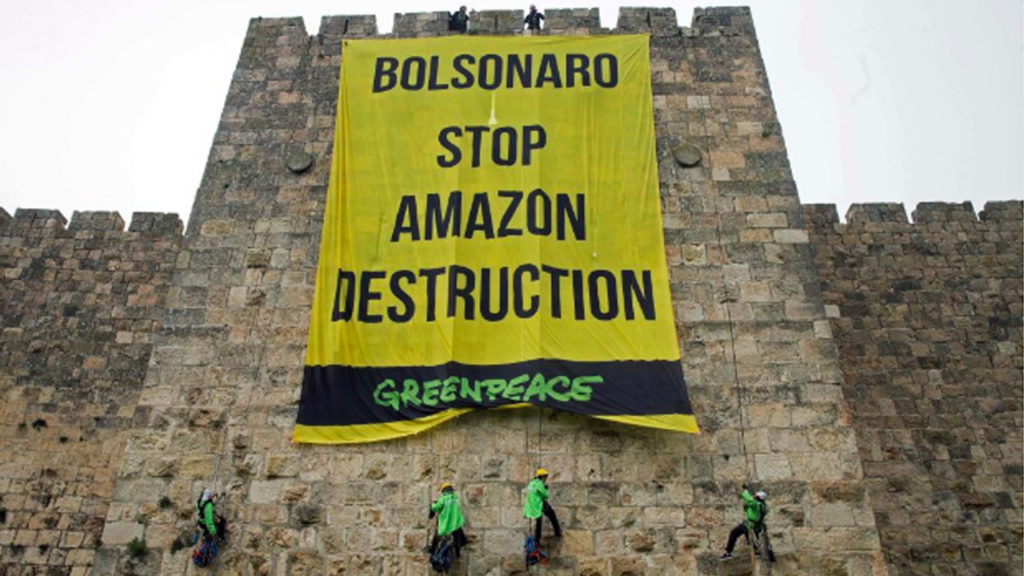 GREG WILPERT It’s The Real News Network and I’m Greg Wilpert in Baltimore. Eight Brazilian former ministers of the environment issued a warning last Wednesday that the government of right-wing President Jair Bolsonaro is in the process of systematically destroying Brazil’s environmental protection policies. The ministers from across the political spectrum say that the environmental ministry’s powers are being stripped, and that after a period of slowing the deforestation of the Amazon rainforest, it is now on the rise again. Marina Silva, who was Environmental Minister under President Lula da Silva called him “an exterminator of the future.” Joining me now to discuss what is happening with regard to Brazil’s environmental policies is Alexander Zaitchik. He is a freelance journalist who has been covering indigenous issues and land conflicts in Peru, Ecuador, Colombia, and Brazil. He recently returned from a trip to the western Amazon that was underwritten by the Pulitzer Center. Thanks for joining us today, Alex.

ALEXANDER ZAITCHIK Good to be here.

GREG WILPERT So last year, when Bolsonaro was running for president, we at The Real News Network covered his statements that he planned to withdraw from the Paris climate agreement and that he planned to open indigenous lands to mining and reassign the environmental issues to the Agriculture Ministry, which is aligned with agribusiness. Bolsonaro has been in office for a little over four months now. What does his environmental record look like so far?

ALEXANDER ZAITCHIK It’s pretty bad, as you would imagine. There has been some pushback on some aspects of withdrawal from the Paris accord, which I haven’t gone through yet but there has been a trickle-down effect— even before you get to the actual policies and agency reorganizations that he’s been undertaking— where you have this massive wave of illegal incursions throughout the Amazon onto formerly-protected lands by loggers, miners, and agribusiness interests, who are emboldened by the rhetoric coming out of the government where they just feel like the laws won’t be enforced. In fact, that is exactly what’s happening. The agencies that have been empowered to protect what’s left of the Brazilian Amazon— and again, we’ve already lost a fifth of it— are being held back. They’re being defunded. They’re being reshuffled, put under hostile ministers, the environmental protection agency, IBAMA. I think the exact number is something around a quarter has been cut from its funds. The conservation agency, ICMBO, is being staffed by right-wing police officers from Sao Paulo. All of the scientists who were running that organization have been fired.

You know, the new Environmental Minister Ricardo Salles has basically just cleaned house. There’s a lot of regional offices that are sitting empty. And then, that’s before you even get to the Indian agency, FUNAI, which obviously plays a hugely important role in helping Brazil’s indigenous groups protect their lands, which account for no less than a quarter of the Brazilian Amazon. They are operating at something like ten percent of their funding right now. Ninety percent has been withheld since Bolsonaro came into office. That’s having a huge ripple effect across the Amazon where groups that formerly felt like they had some backing from the state to push back against illegal land incursions, are feeling completely abandoned and getting ready to mount their own defense with whatever allies they can cobble together, and do what they have to do to protect their lands without these agencies that have been built up over the last 30 years or so since the return of civilian government, which are being systematically dismantled pretty much across the board.

GREG WILPERT Now I understand one of the more recent developments the government is planning on replacing a, kind of, independent panel of experts of over 160 experts, I believe it is, with a more politically-appointed, much smaller group. Can you talk about that? What does that panel do and what would that change imply for the environment in Brazil?

ALEXANDER ZAITCHIK Yeah. Pretty much all of the scientific boards are being replaced with agribusiness hacks and the politicians from the [inaudible] bench. And, you know, it’s a sort of an echo of what’s happening in the US where the scientific community is, sort of, seen as a hostile force working against the development of the Brazilian economy and this authoritarian vision of development in the Amazon, which goes way back. It’s worth mentioning that this precedes Bolsonaro, it precedes the military junta that he is nostalgic for, that ran the country during the 60s, 70s, and 80s. I mean, it’s a long strain in Brazilian history to see the Amazon as this wild territory that has to be settled and populated with “real Brazilians,” both as part of some modernization drive but also as a geopolitical imperative. There’s this paranoia that the Amazon will be taken over by Brazil’s neighbors, that it will be somehow internationalized as some sort of commons because it’s so crucial to the global climate. So it’s being militarized, and you have law and order figures moving in where scientists, ecologists, and conservationists used to provide crucial information to the government to manage the Amazon, which is sixty percent of the entire Amazon rainforest in Latin America.

GREG WILPERT Now, how are Brazil’s social movements, particularly the environmental and indigenous movements, reacting to the Bolsonaro government’s anti-preservation policies? What is happening in Brazil in this regard?

ALEXANDER ZAITCHIK Quite a lot. I mean, the indigenous movement is at the forefront of this because they’re on the front lines of what’s happening in the Amazon and they are very unified, very active right now. When I was traveling recently through the western Amazon in Rondonia, Acre, and the state of Amazonas in the south, there were assemblies being held pretty much every other day, villages coming together and talking about stepping up patrols, monitoring advocacy, alliance-building, both in Brazil and internationally. They are trying to rebuild something called the Forest Peoples Alliance, which was quite successful in the late 80s and early 90s to bring global attention to what was happening in Brazil and also put forth alternative development models. This alliance brings together indigenous groups, small-scale extractivists, rubber tappers, nut gatherers, and other traditional peoples of the Brazilian Amazon, of which the indigenous are the largest group, but they’re certainly not the only people there with an interest in preserving the state of things.

GREG WILPERT Now, as you mentioned earlier, Brazil is generally considered one of the most important countries with regard to environmental issues, particularly because most of the Amazon rainforest is located in Brazil with all of its biodiversity and its really crucial role in absorbing atmospheric carbon dioxide. What role is the international community, can it play or is it playing, with regard to holding Bolsonaro back with regard to his environmental policies?

ALEXANDER ZAITCHIK Yeah. The international community and international alliances are absolutely crucial, just as they were in the 90s when the soy moratorium and some of the logging efforts had a huge impact to slowing and ultimately stopping and reversing the runaway deforestation that had resulted from the policies of the military dictatorship period, which Bolsonaro is trying to replicate now pretty much exactly. So yeah, it will again be crucial to stopping that. You know, a lot of the indigenous leaders are going abroad, trying to raise the alarm about what’s happening, and they’re meeting with government officials.

The governments of Asia, Europe and North America are going to be crucial in making sure that another twenty percent of the forest is not destroyed by the policies that Bolsonaro is putting in place right now because scientists tell us that another twenty percent risks triggering this feedback loop called dieback, in which the forest will simply collapse and its systems will no longer be able to sustain themselves. There will be a, sort of, domino effect of dry-out and burns, and then you’ll have this enormous release of carbon as well as an absorption of heat that is now being reflected back into space. And of course, the huge loss of biodiversity, which is just—we don’t even really know how great it is because so little of the rainforest has been studied. Something like one percent of all of the plants of the Amazon have been studied, and from that one percent, we’re getting a quarter of our pharmaceutical products. So the potential there that would be lost, would be as significant as the impact on the climate.

GREG WILPERT Wow. Well, we’re going to leave it there for now. I was speaking to Alex Zaitchik, freelance journalist. Thanks again, Alex, for joining us today.