The anti-Bolsonaro marches come amid extremely concerning revelations, which allegedly tie the president to the murder of the councilwoman and LGBT activist Marielle Franco last year.

The anti-Bolsonaro marches come amid extremely concerning revelations, which allegedly tie the president to the murder of the councilwoman and LGBT activist Marielle Franco last year. 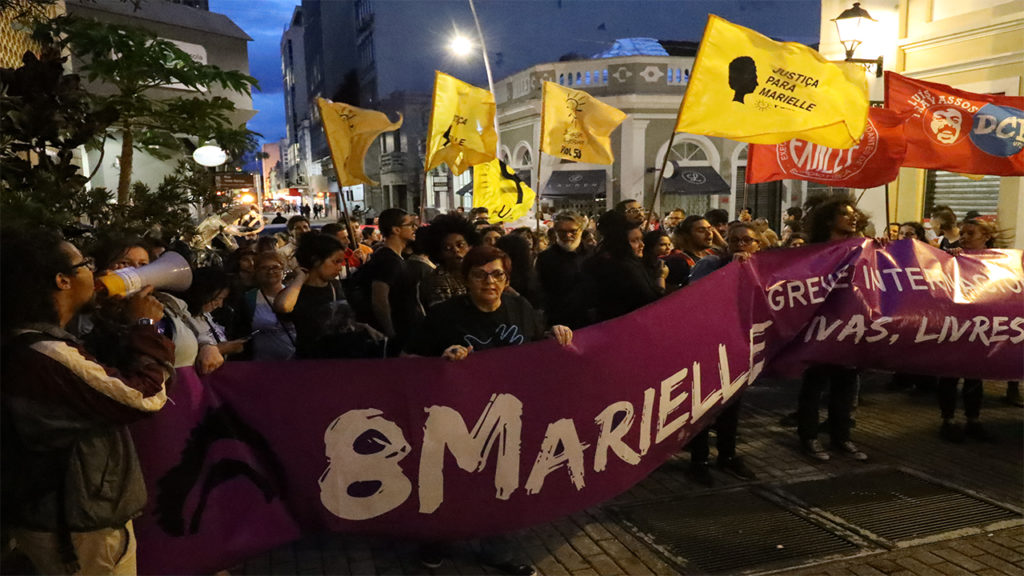 MICHAEL FOX Brazilians marched in dozens of cities across the country against the far-right government of president Jair Bolsonaro.

The marches come amid extremely concerning revelations, which allegedly tie Bolsonaro to the murder of Marielle Franco last year. Franco was a black LGBT council woman from the favelas of Rio de Janeiro. She was killed in March 2018 by hitmen. Her death sparked global outrage.

AZANIA MAHIN We are here today, because we believe our democracy is at risk when a city councilwoman is killed, and more than a year ago, we still don’t know who killed her and the main suspect is the president of the country.

MICHAEL FOX This week’s protests around Brazil were led by the National University Student’s Union, UNE. In Florianopolis, the rally was coordinated by organizers with the Black Youth Front.

AZANIA MAHIN We are fighting not just for Marielle’s memory, but also so that black women like me feel safe to be on the streets and exercise our right to live in democracy.

MICHAEL FOX They protested downtown outside the main bus terminal, and then marched through the city center. They held a rally on the steps alongside City Hall.

SPEAKER We are not just here to make our demands, or to show that we are upset. We are here to show that black women are organizing a popular front and to stand up for our lives.

What’s new is that according to testimony by a guard, who worked the gate at the front of the neighborhood, the man who allegedly drove the car to Franco’s murder, gained entry to the community just prior to the killing by telling him that he was visiting Bolsonaro.

According to the report, the guard called Bolsonaro’s house. Bolsonaro let him in. But the man drove to the home of Bolsonaro’s neighbor Ronnie Lessa, who is now being held as a primary suspect in the case.

The news show said that the two then left and changed cars, before driving to gun down Franco. Bolsonaro quickly attacked the story, denying his involvement and calling into question the testimony from the guard. Bolsonaro’s son Carlos posted a video allegedly showing the phone records from Bolsonaro’s gated community from the day of Marielle Franco’s murder.

He claimed that there were no calls to his father’s house. But many raised concerns about the safety of the audio from tampering, since he had access to the crucial evidence.

Bolsonaro also told the press that he had taken copies of the recordings to prevent them from being tampered with.

MICHAEL FOX If that wasn’t enough, one of the prosecutor’s investigating the Franco murder was forced to step down from the investigation after it surfaced that she was an avid supporter of president Bolsonaro. Meanwhile, Bolsonaro’s son Eduardo made his own political shockwaves.

Eduardo is a congressman and a member of Steve Bannon’s far-right organization, The Movement. In an interview, Eduardo said it could be necessary to take authoritarian measures and effectively sink the country into a new military dictatorship, if the left were to unleash radical Chile-style protests.

His statements sparked outrage. Unions and left congressional representatives called for him to be removed from office. Back at the protests, the rallies went well into the evening.

LEONEL CAMASÃO It’s painful. It’s very serious, though not unexpected, to see that all of the evidence literally points to the house of the president.

MICHAEL FOX Those in attendance vowed to continue to fight.

CARLA AYRES Only popular unity can get us out of this state of things. And the fight for justice against this illegitimate government that has devastated our lives in recent years.