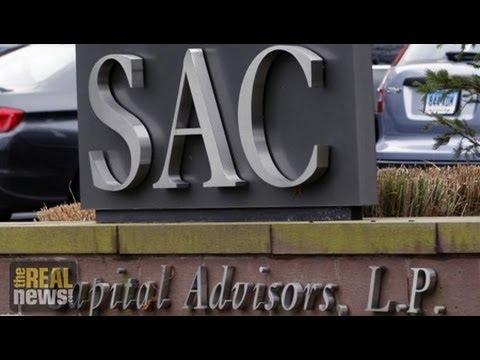 Hedge fund SAC advisers have admitted to insider trading. This is the first criminal confession from a Wall Street firm in a generation.

Joining us now to discuss this is Bill Black. Bill is an associate professor of economics and law at the University of Missouri-Kansas City. He’s a white-collar criminologist and a former financial regulator, and he’s a regular contributor to The Real News. Thanks for joining us, Bill.

DESVARIEUX: So, Bill, can you explain the insider-trading charges that SAC advisers have pled guilty to? Essentially, why did they even confess?

BLACK: They were caught dead to rights. There are already six of their senior officials that have either pled or been convicted of engaging in insider-trading, and two more are under indictment. And the general rule is that a corporation is responsible for the acts of its senior officers of this kind. So a prominent white-collar defense lawyer has opined that really the case was hopeless, from SEC’s standpoint, were they to try to fight it.

BLACK: This has to do with the common thread that runs through a whole series of these prosecutorial disasters, and that is, as long as you don’t have the express conversation hello, I want you to commit a fraud and I will pay you more money if you commit the fraud and instead use modern executive and professional compensation to produce the same results, in other words, hey, you have a job requirement, various SAC senior investment officers, of bringing a certain amount of deals to me personally, Steven Cohen, in which you demonstrate that they have an unusually high degree of confidence that these deals will be huge money-makers–well, gosh, how do you have an unusual degree of confidence that something will be a huge money-winner in these circumstances? You have insider information. So Cohen made it a job requirement to bring this kind of extra-special information. And then you got paid a lot of money if you delivered, and you got–they got rid of you if you didn’t deliver. So compensation was everything.

And the Justice Department, unfortunately, is taking the position that even though the normal rule of law is that you are responsible for the reasonably foreseeable outcome of these kind of incentive structures [incompr.] as the CEO, that they won’t charge people for it, as long as, as I said, they’re smart enough not to say it out loud. And Cohen actually tried to make sure that the traders didn’t put it in writing and such what was going on, although they slipped up periodically, which, of course, helped to get them convicted.

DESVARIEUX: So, Bill, let’s go back and talk about the SAC’s criminal confession. This marks a departure for the Justice Department towards criminal prosecutions rather than civil charges and settlements, doesn’t it?

BLACK: Well, that’s referring only to the case against the corporation, not against the individual. And so what’s happened is the Justice Department, unfortunately, learned completely the wrong lesson in the Enron context when it brought a criminal case against Arthur Anderson. Now, mind you, Arthur Andersen, one of the then big five accounting firms, already had a deferred prosecution agreement, and the Justice Department offered them yet another deferred prosecution agreement, which means they wouldn’t prosecute them. And Arthur Anderson said, no, we’re going to go ahead and we’re going to have a trial. And they lost that trial, although on somewhat technical grounds. It was overturned by the Supreme Court on appeal, and there could have been a retrial, but at that point there was no Arthur Andersen, so the Justice Department said, no sense having a case against an entity that no longer exists and will never exist again.

But the Justice Department got criticized left, right, and center from the business types and the defense bar about how dare you bring a case against Arthur Anderson, even though Arthur Anderson had aided and abetted scores of the largest securities fraud cases in America and had been proven to be a disaster. So, many of us believe that Arthur Andersen committed suicide, as opposed to being destroyed by the Justice Department. But that’s not the position that the Justice Department took. They took the position that they should never again indict a major financial firm. And so the New York Times report aptly calls this the first time in a decade that they’ve done it. And they only did it here because they were unwilling to charge Cohen personally, for the reasons I’ve described, that as long as you just use compensation to do it, then you can get away with it.

And this means Cohen’s–has $9 billion of his own funds, which are of course the proceeds of years of doing this stuff, and he gets to keep the great bulk of that $9 billion. The fine is nominally somewhere around $1.2 billion, but they’ve agreed to reduce that by crediting what he’s already agreed to pay the SEC, so that number will be knocked down in half. So Cohen, assuming the money comes from him directly–and that’s not necessarily a safe assumption, because this stuff can be tax-deductible and they can often have insurance–but at most, instead of being a $9 billion-plus billionaire, maybe he would be an $8.5 billion billionaire that goes around buying paintings for $145 million and has multiple mansions in the $30 million to in some cases $100 million range and such. In other words, they’re going to leave him incredibly wealthy and bring no criminal case against him.

And they, the Justice Department, is actually injuring its arm patting itself on the back for how brilliant and tough and aggressive they were. And, of course, the reporters are painting it just that way, even though what they’ve demonstrated is that crime doesn’t simply pay–it pays enormously. Justice Department is not prosecuting and is doing nothing to change the executive and professional compensation that allowed not just this massive fraud, but the three epidemics of fraud that drove the financial crisis, all of which were done through very similar means, involving executive and professional compensation for the executives, for the appraisers, for the loan brokers, for the loan officers, for the credit rating agencies, for the outside auditing firms, and for the law firms. And we could see how effective it was. These were the–each of them individually would have been the largest epidemic or most damaging financial epidemic of fraud in world history, and, of course, they all three occurred simultaneously. I’m referring to the epidemic of liars loans, the epidemic of appraisal fraud, and the epidemic of secondary market fraudulent sales of mortgages. So right now the Justice Department has given a roadmap and says: as long as you use compensation to do this, we’ll take a little bit of your money at the end of the day, maybe, but you will not face any charges and you can walk away with billions of fraudulent proceeds.

DESVARIEUX: Alright, Bill. Thank you so much for your analysis.