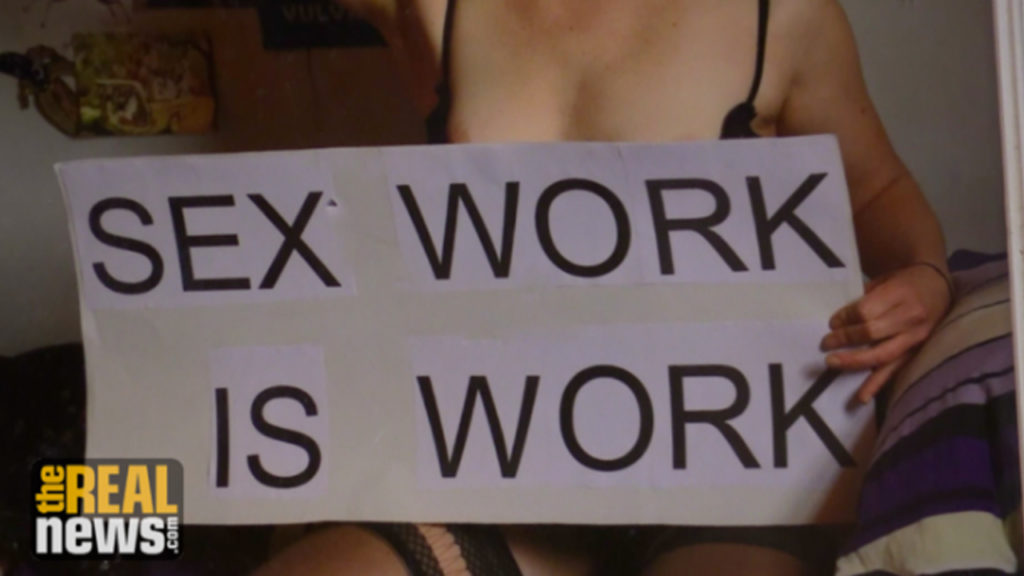 TAYA GRAHAM: This is Taya Graham, reporting for The Real News Network in Baltimore City, Maryland.

Incarceration, assault, rape, and murder; these are all forms of violence that sex workers can experience. Which is why December 17 is so important. It’s the International Day to End Violence Against Sex Workers. Tonight people gathered not only to mourn the lives lost, but to celebrate them. People gathered in solidarity to promote policies in the future to protect other sex workers from violence.

The commemoration was organized by the Baltimore chapter of SWOP, the Sex Workers Outreach Project. Its mission is to advocate for the safety of sex workers across the country.

ANDRE SHAKTI: So December 17 is the International Day to End Violence Against Sex Workers. And for me it means a day of remembrance. It means looking back at the lives that we’ve lost, both altogether and also in the past year, specifically. Originally the day was commemorated by the Green River Killer, which was a serial killer that targeted specifically women who were involved in the sex industry. And the day was spawned because people who are in the sex industry oftentimes aren’t seen as as human beings. They’re seen as, quote, imperfect victims.

TAYA GRAHAM: And that concern found form in an intricate memoriam: An installation that memorialized victims of violence in Baltimore and beyond.

TAYA GRAHAM: But also embodied the message of the evening: That sex work has dignity and warrants protections.

CHRISTA B DARING: The reason that December 17 is so important is because the violence against sex workers intersects with violence against women and trans people in so many different ways, and across race and gender lines. But still we see the focused violence on black trans sex workers, on women of color in general. And what December 17 allows us to do is to celebrate the lives of those of us that are here while also lifting up all of those that we’ve lost in the last year.

TAYA GRAHAM: And from the perspective of the participants, it’s affirmative and complex.

MELONEY HILL: I try to tell people there’s levels to sex work. So whereas people see a person like me who’s into financial domination as not a sex worker, I like to think that I still am. I don’t want to separate myself. So it matters to me because I still see myself as a sex worker, even though I have so much other things going on. Like, I still see this could be me.

TAYA GRAHAM: How do you think police departments and communities should deal with sex workers who work on the street, or who want to work from home? What do you think would be good policies?

MONICA YORKMAN: I think what would be a good policy is, number one, is stop their hypocrisy. Because OK, you know that there are college girls, camgirls, who are making all kinds of money. And when you see them on talk shows, and they talk about how they’re putting themselves through college to become lawyers–you know. And so at the same time–it’s the same flawed policy that’s caused homelessness. That’s caused a lot of sex workers who are on the street to be on the street in the first place.

TAYA GRAHAM: Which Is why, along with the solemnity of remembering those who passed away, there were performances and self-expression; a mutual affirmation of joy and pain, sorrow and defiance, that the women and men who have suffered in silence in the past have found a powerful voice in the present.

ANDRE SHAKTI: The more that sex workers are stigmatized, the less they, quote, matter in the eyes of the public, and that absolutely contributes to our victimization.

TAYA GRAHAM: This is Taya Graham and Steven Janis reporting for The Real News Network in Baltimore City, Maryland.