Ajamu Baraka: The term American exceptionalism is a pass for the US to bypass international law and continue with its global ambitions

Ajamu Baraka: The term American exceptionalism is a pass for the US to bypass international law and continue with its global ambitions 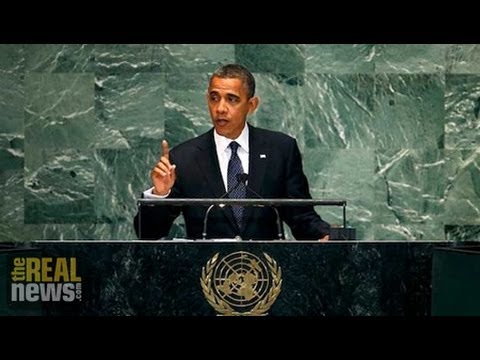 The term American exceptionalism has been all over the media recently. We had President Obama saying that America is exceptional in his speech to the UN General Assembly. Let’s take a listen to what the president had to say.

BARACK OBAMA, U.S. PRESIDENT: Some may disagree, but I believe America is exceptional, in part because we have shown a willingness through the sacrifice of blood and treasure to stand up not only for our own narrow self-interests, but for the interests of all.

DESVARIEUX: All, however, are not in agreement with the president. Russian President Vladimir Putin wrote an op-ed in The New York Times challenging this notion of American exceptionalism. He wrote, quote:

“It is extremely dangerous to encourage people to see themselves as exceptional, whatever the motivation. There are big countries and small countries, rich and poor, those with long democratic traditions and those still finding their way to democracy. Their policies differ, too. We are all different, but when we ask for the Lord’s blessings, we must not forget that God created us equal.”

With us to deconstruct this idea of American exceptionalism is Ajamu Baraka. He’s a longtime human rights activist, writer, and fellow at the Institute for Policy Studies in Washington, D.C.

Thanks for joining us, Ajamu.

DESVARIEUX: American exceptionalism. Why is it so controversial?

BARAKA: Well, because it’s basically sort of a delusional concept created by American propagandists to exempt the U.S. from the the same standards that all other nations were subjected to. We see that President Obama and many others believe that the U.S. has a right and responsibility to determine for itself international law, standards, processes, and to take it upon itself the responsibility to determine its national morality.

Well, the fact of the matter is that there is no standing in international law that allows any one state to arbitrarily determine the international order, and that basically this ideal is something that is more suited for appealing to the vanity of the domestic audience than the international community.

DESVARIEUX: So are you saying, when you use the term American exceptionalism, it’s really code for humanitarian intervention?

BARAKA: In my estimation, we have to connect the two concepts of American exceptionalism and this notion of humanitarian intervention. Both are based on the same sort of noxious ideal that the U.S. and other Western colonial powers have a right and a responsibility to determine for the world the international morality, that they have–that the international law and standards don’t apply to them. We saw that in the recent attacks that took place [incompr.] recent, but the–beginning back in the 1990s with the attack on Kosovo based on their notion of humanitarian intervention. We see humanitarian intervention being the framework for the attack, the proposed attack on Syria. So it’s one of these notions that resonates with some sectors of the U.S. population because it’s something that resonates in terms of the culture, this notion of good and evil in the U.S. being–of being on the side of good with the responsibility to defend the world against evil.

DESVARIEUX: Let’s go back some years and talk about candidate Obama, who, of course you know he was very careful about using the term American exceptionalism, because his predecessor, President Bush, did so very often. But candidate Obama, of course, became President Obama, and now he’s talking about wanting to attach a resolution to strike Syria if Assad fails to hand over all of his chemical weapons. What do you make of this shift in tone? Why do you think Obama has changed so much on this issue of American exceptionalism?

So as president, Barack Obama’s responsibility is to advance that agenda. That agenda means that they have to isolate Iran and that they are engaged in a process of dismantling, of dismembering all of the states in the Middle East that are opposed to U.S. hegemony and opposed to the continuation of the colonial policies of Israel. So, as President Barack Obama, that’s his job, to advance those interests. And he’s been doing that fairly well.

DESVARIEUX: When you say that he’s advancing the interests of the 1 percent, who are you talking about specifically? Who is he really signaling when he uses this term American exceptionalism?

BARAKA: Well, he’s using that as a propaganda ploy to garner support from the American public for this illegal war that they were proposing against Syria, a war that was going to take place without any resolution from the Security Council [incompr.] is the only body that has the power to sanction the use of force, and without any kind of real support from the American people. The American people, and in majority numbers, were opposed to the U.S. becoming more involved in Syria, but the U.S. president was prepared to make that attack. So he had to frame it as a humanitarian mission. And that’s why that attack against the civilians by whatever forces using sarin gas was the trigger that allowed him to frame this in those terms.

The 1 percent are those entities that will benefit, have benefited from the aggressive policies of the U.S. over the last few decades–elements of the military-industrial complex, elements that are involved in oil extraction. These are the banking elements that are looking for the most beneficial results for their investments in the Middle East. These are the elements of the 1 percent that I’m talking about.

The vast majority of the people in the U.S. and, of course, throughout the world are opposed to the continuation of these wars.

DESVARIEUX: Well, thank you so much for joining us, Ajamu.

BARAKA: I appreciate it. My pleasure.

Ajamu Baraka is an internationally recognized human rights defender whose experience spans four decades of domestic and international activism. Baraka is an Associate Fellow at the Institute for Policy Studies (IPS) in Washington, D.C. and editor and contributing columnist for the Black Agenda Report. His latest publications include contributions to two recently published books “magine:…