The murder trial of environmental and indigenous activist Berta Cáceres leaves many issues unresolved. Meanwhile, the human rights situation in Honduras has been getting worse, even as Berta continues to inspire activists with her example

The murder trial of environmental and indigenous activist Berta Cáceres leaves many issues unresolved. Meanwhile, the human rights situation in Honduras has been getting worse, even as Berta continues to inspire activists with her example 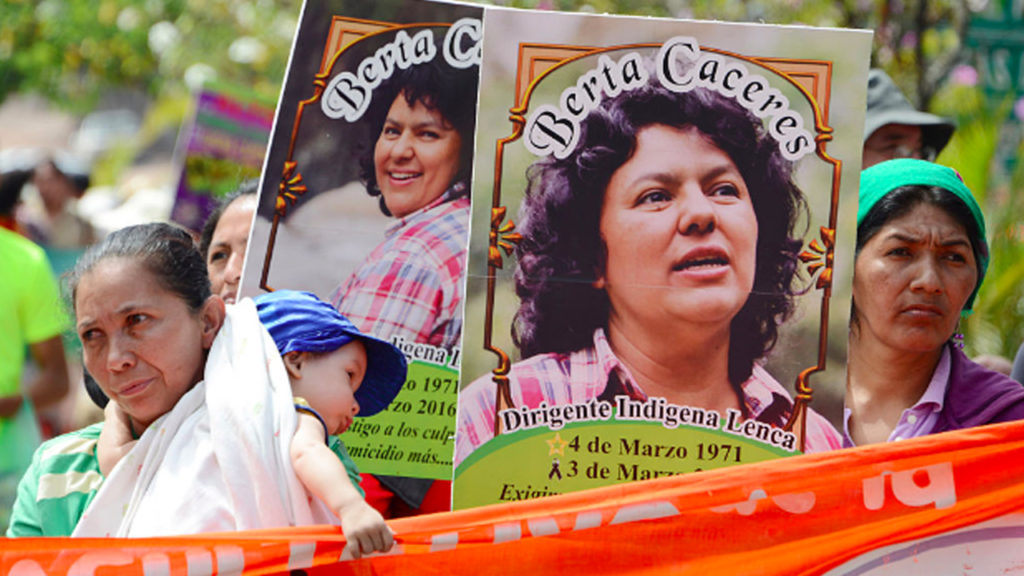 Sunday, March 3, is the three-year anniversary of the murder of Honduran environmental activist and Indigenous leader Berta Caceres. She was shot by a group of gunmen in her home in the town of Esperanza. The year before she was killed, hhe won the Goldman Environmental Prize for her grassroots campaign to pressure the world’s largest dam builder to pull out of the Agua Zarca dam in Honduras. Last November, a criminal court in Honduras convicted eight men for having participated in the murder of Berta Caceres. Some had ties to the military and to the notorious U.S. military training school that used to be go by the name School of the Americas. Another was a director of DESA, the company that built the Agua Zarca dam. The trial, however, took place under a cloud of suspicion of coverups and irregularities.

Joining me now to look at Berta Caceres’ legacy, her murder trial, and today’s situation in Honduras is Karen Spring. She joins us from Tegucigalpa, Honduras, where she coordinates the work of the Honduras Solidarity Network. Thanks for joining us today, Karen.

KAREN SPRING: Thank you very much, Greg, for having me.

GREG WILPERT: So let’s start with the trial. Amnesty International released a statement on Thursday saying that not everyone responsible for the murder of Berta Caceres has been brought to justice yet. What happened in the trial, and what are the unresolved issues surrounding it?

KAREN SPRING: Sure. The trial that finished late last year, it was seven people of eight were found guilty of participating or being coauthors of Berta Caceres’ murder. And four of those people were found–were convicted for the attempted murder against the Mexican activist Gustavo Castro. And so one of the people that were accused were relieved of all charges because they were unable to prove that he was involved.

But there’s a lot still to be done in the case. And although there are seven coauthors that have been found guilty, there are still the intellectual authors, or the masterminds, or the people that either paid or that were part of coordinating the efforts to not only kill Berta, but also basically criminalize her and persecute her for several years leading up to her assassination. And so COPINH, which is the organization she co-founded, which is now headed by her daughter and her family, they are still demanding that the president of the company, DESA, that was responsible for building the dam, be brought to justice as well. And they also say that there is a very wealthy family that is behind paying for her murder and helping plan it. And so although there’s been seven coauthors convicted, there are still people out there that have involvement in her murder, and so there’s–we’re still waiting for justice in many ways for Berta.

GREG WILPERT: Now, it’s been almost 10 years since the 2009 coup against President Manuel Zelaya, who was forcefully removed from office with U.S. support. Many activists in Honduras point to this event as a key moment in Honduran history. Give us an idea as to how the human rights situation for activists has evolved since then until now.

KAREN SPRING: The human rights situation since the 2009 coup that was supported by the U.S. and Canada has–basically it led to a downward spiral of human rights violations, of criminalization, threats, attacks, and assassinations against journalists, lawyers, Indigenous leaders, environmentalists. And unfortunately, that downward spiral has not stopped. And mostly because in 2017, at the end of the year 2017, there was another crisis in a country that was sort of sparked by the 2009 coup. That was the electoral fraud. And since then the country has again–is now in another sort of–the crisis has deepened. And so the situation remains probably the worst I’ve ever seen it in the 10 years that I’ve been working here.

There’s justice system is used unequally, and it goes after people like Berta. But that are people from other communities that are trying to stop hydroelectric dams and mining projects that severely damage their communities, and any sort of human rights work of people that speak out about what is happening here. And so the situation remains very dire in Honduras.

GREG WILPERT: Speaking of the election in 2017, as you mentioned, it took place among massive accusations of fraud. Still, the U.S. and its allies accepted the results. Now, recently, Hernandez’s brother was arrested on charges of drug trafficking. Is the government doing anything about drug trafficking and corruption? And how is it generally dealing with this issue of what seems to be a growing corruption scandal?

KAREN SPRING: So that’s a really interesting question. In the international media and the Honduran media, Juan Orlando Fernandes claims that he is fighting an all-out battle against drug trafficking and corruption in his government. But it remains really unclear how that is is happening, given that his brother was arrested in the United States, and he was accused, and he’s now in prison awaiting trial of being basically a leader of a drug cartel and coordinating cartels all over the region. And so he remains–Juan Orlando Hernandez has this discourse of fighting crime, of fighting drug trafficking. But nobody can seem to explain how he has that discourse while his brother was responsible, one of the largest drug dealers or drug traffickers in the country. But what is happening is that discourse of trying to fight gangs, of trying to fight drug trafficking, is used by the Canadian and United States government to sort of justify more and more support for security, for arms, for support for the justice system that is not working, is not functional. Extremely high levels of corruption and impunity.

And so the the efforts to make Honduras more secure seems to be–it seems to be used against people that are speaking out against the government, people like Berta Caceres, or people that are inspired by Berta Caceres, that remain speaking out against the same thing she did. And so they use that whole apparatus against those people. And that’s very clear here in Honduras. And people are very clear about where that money goes, where the security–who the security apparatus serves, and who it is against. And that’s mostly the entire Honduran population that is not in agreement with what the government is doing, and the high levels of impunity and corruption.

GREG WILPERT: Well, actually, that brings me to my last question. Returning to Berta Caceres, what would you say has been her legacy for Honduras?

KAREN SPRING: That’s a really hard question, because Berta was a very unique and inspirational activist. She was unique in the sense that she had a level of leadership in Honduras and in the world that, you know, when you look at how many people have demanded justice for her assassination. I think the legacy that she left is people here in Honduras say that she wasn’t killed, and that her legacy and her message and her fight have multiplied. And she wasn’t killed–what they say in Spanish is that she was planted, and she keeps growing and growing throughout the years. And so many people in many communities that are fighting against mining companies and hydroelectric dams and tourist projects that are mostly foreign investments in the country, they will often cite her as one of their reasons and inspirations for continuing to speak out against the neoliberal development economic model that has been the main type of development model, so-called development model that the government continues to implement despite widespread discontent.

And so Berta’s face, paintings of her, appear all over the country, spraypainted on the walls she’s present. And her picture and her family and her legacy are present in all public protests, including the ones that occurred after the crisis in 2017. And so it’s very much true that her legacy has multiplied, and that her assassination has led other communities in Honduras to fight harder to defend their natural resources and their territories.

GREG WILPERT: We’re going to leave it there for now. I was speaking to Karen Spring, coordinator of the Honduras Solidarity Network. Thanks again, Karen, for having joined us today.