$15 Minimum Wage: Job Killer or Path Out of Poverty?

Gov. Larry Hogan says a $15 minimum wage in Maryland could cost the state 100,000 jobs, but economists say raising low wages could benefit half a million workers

Gov. Larry Hogan says a $15 minimum wage in Maryland could cost the state 100,000 jobs, but economists say raising low wages could benefit half a million workers 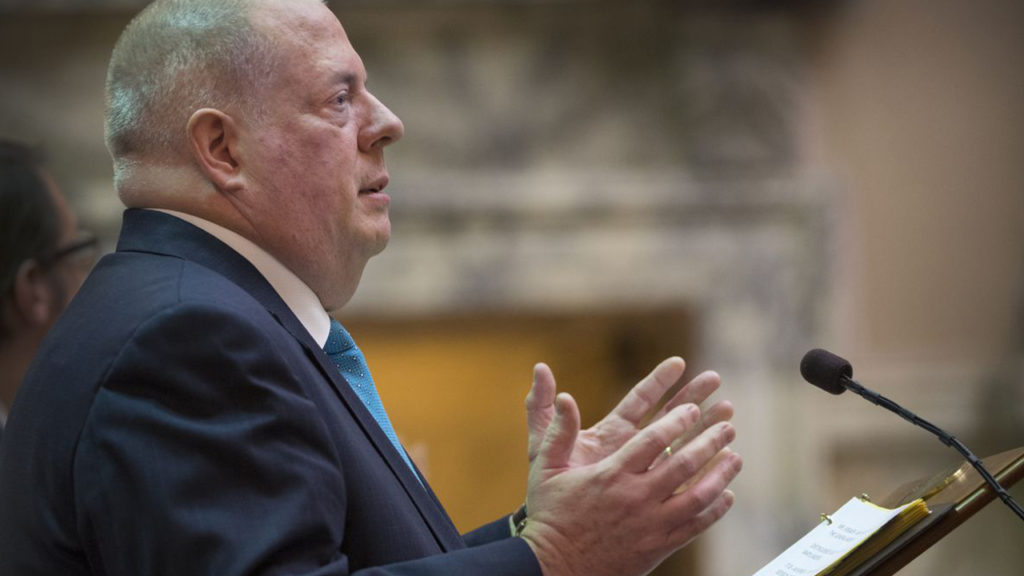 JAISAL NOOR: Maryland’s Republican governor Larry Hogan touts his ability to work across the aisle, but a brewing debate over raising the minimum wage could put him at odds with Democrats.

JAISAL NOOR: Maryland raised its minimum wage to $10.10 an hour last July. Of the state’s over half a million low-wage workers, 9 in 10 are over the age of 20, and about a third have children. That’s why polls show broad support for a $15 minimum wage. But Governor Hogan has his concerns.

LARRY HOGAN: We will be more than twice as high as Virginia. That is $7.25. Now, does that put us in a competitive position? Do companies say, I’m going to start up and try to hire 100 new young people in these entry jobs. Am I going to do it in Maryland, or am I going to do it in Virginia? So I think we need to have the discussion. There have been some reports that say we could lose as many as 100,000 jobs.

JAISAL NOOR: The NFIB, or National Federation of Independent Business, predicts 100,000 jobs could be lost over the next decade if Maryland adopts a higher minimum wage. Higher labor costs would force employers to lay off tens of thousands of workers, including over 13,000 in the fast food sector alone, along with $61 billion in lost output over the next decade.

The minimum wage has remained largely stagnant for half a century. When cities and states have raised it, peer-reviewed studies have found they did not cause job losses, argues economist David Cooper of the nonpartisan Economic Policy Institute. There has been an enormous body of research on the effect of the minimum wage on employment, particularly since the mid-1990s, including recently by the Census Bureau, which has largely concluded that raising the minimum wage does exactly what it’s supposed to do. Raising the pay of low-wage workers with little impact on their employment.

But in response, the NFIB’s Susan Stoltenberg argues the burden will fall on small business. If they can’t raise prices because consumers won’t pay more in the marketplace, they have no option but to cut hours or eliminate entry level jobs. But Cooper disagrees, arguing even if there were cases where a minimum wage increase slowed the rate of job growth or led to a small reduction in workers’ hours, the fact that workers were making higher hourly wages meant their take home pay at the end of the year was the same if not greater than before, reducing the share of families in poverty.

Cooper argues the term ‘experienced’ is being mischaracterized. It doesn’t refer to skill or tenure. Instead it’s referencing workers who already worked fewer hours in the 12 months before the increase. He says the study is making his exact point: Most workers saw clear wage gains. Some ended up with the same amount of income for fewer hours of work.

A recent Bloomberg piece about Seattle shows that employment in food service has actually increased since the minimum wage became $15 an hour in the beginning of 2018. And the first study to examine the impacts of raising wages over $10 an hour in six cities found more money going to low-wage workers and no significant job loss. Economists have found raising the minimum wage would have other benefits, as well: Raising job retention, economic stimulus with more people having money to spend, and reducing the number of working people relying on government assistance. And a growing number of small business owners say they want a higher minimum wage.

JACQ JONES: It is in the best interests of any business to ensure that their employees are able to meet their own basic needs. This is also a matter of ethics for me. I may be old fashioned, but I believe that I should not be relying on government subsidies to stay in business. If I am paying my employees at a level where they are relying on food stamps to eat and Section 8 for housing, the government is picking up the tab on my substandard wages. That’s not an ethical business; that’s stealing from the taxpayers.

JAISAL NOOR: The NFIB describes itself as the voice of small business, but questions have been raised about whose interests they serve. As CNN reported, top donors have included the Koch brothers, whose donor network push an agenda that benefits big business; a claim the NFIB vehemently denies. For their part, Democrats in Maryland are holding a press conference Monday to announce a push for a $15 minimum wage by 2023 starting this year.

For The Real News, this is Jaisal Noor reporting in Annapolis, Maryland.