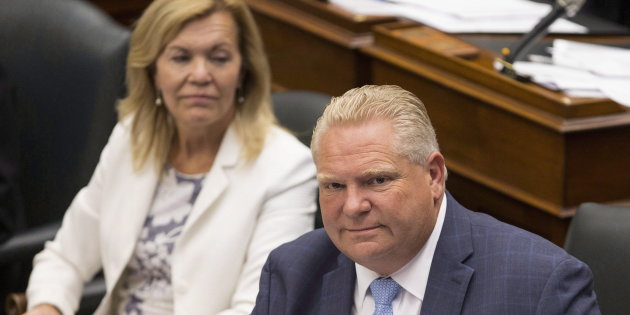 It is called “The People’s Health Care Act.” But the new health care omnibus bill, being rushed at breakneck speed through Ontario’s Legislature by Doug Ford’s majority caucus, does not reflect his promises to “the people” in the election. It does not open a single operating room to speed up surgical wait times, though lack of operating funds means that there are closed ORs in every major hospital in Ontario. It doesn’t add a single new nursing home space, nor one more nurse, health professional, or doctor. It doesn’t open any of the dozens of hospital wards, closed down as real-dollar funding has been tightened year after year. Yet Ontario has the fewest hospital beds left of any province in the country.

The evidence is abundant that Ontario has a serious health care capacity problem. Cuts and rationing have gone too far. Health funding in this province has dropped to dead last in Canada. In fact, during the election, Ford traversed the province promising an expansion — not a wholesale dismembering — of the health system.

But what is in Ford’s health care omnibus bill is a new “super agency” forged out of 20 existing agencies with widely disparate mandates, histories, levels of effectiveness, and cultures. That alone is a mega-merger which carries a great deal of risk for vital patient care services.

But that’s not all. Written in the new law are vast powers that the Ford government has given itself and its political appointees in the new “super agency” to effect a wholesale restructuring of our local hospitals, long-term care, home care, community care, mental health and so on. Restructuring powers are defined in the legislation as not only “service coordination” but also more ominously, mergers, amalgamations, transfers of all or part of a service, closures of service, and shutdowns of entire service providers. These are not simply voluntary. They can be ordered by decree of the minister or the government’s appointees in the super agency and they also can be coerced through use of the Agency’s funding powers.

Already the attention of every CEO and manager in the health system has turned to restructuring. The reality is that the large and ambitious will seek to expand their “market share” and profits using the new opportunities afforded in this legislation. They were the prime beneficiaries of the hospital mergers and restructuring under the Harris government in the late 1990s. Today, largely as a result of that round of health restructuring, public hospital services were transferred to for-profit long-term care and home care.

The majority of long-term care is privatized and that sector is dominated by the large for-profit chain companies. The Victorian Order of Nurses (VON), a non-profit health organization that provides home nursing care, and local non-profit home care has been decimated. Large hospital CEOs, having taken over smaller hospitals in forced mergers, have seen their power (and salaries) balloon even while hospital beds and services are cut and privatized. Smaller towns have seen their services gutted. Patient advocates have faced an uphill battle trying to tighten regulatory regimes and improve care levels against the powerful for-profit lobby that pushes, often successfully, for ever more money for profit and deregulation of patient protections and care standards under the guise of “eliminating red tape.”

The Provincial Auditor reported in 1999 that the last hospital restructuring that occurred under Premier Mike Harris from 1996 to 2000 cost $3.9 billion to lay off nurses and staff, close down local services, then rebuild them elsewhere. The final “savings” was $800 million. Yes, that is correct: they spent $3.9 billion to cut $800 million.

In Doug Ford’s new round of health care restructuring, years of mergers and takeovers and partnerships and so on are supposed to result, according to the current minister, in 30 to 50 giant health-care conglomerates running virtually all services for up to 15 million Ontarians. Each conglomerate would be made up of hundreds of mergers, service transfers and takeovers, but also some separate entities: 1,800 service providers are to be pushed into these groupings. Each conglomerate will need a new tier of administration to run the relationship between its various parts. That equals 30 to 50 new administrations plus the mothership “super agency.” The administration of the conglomerates will be owned by the providers themselves in their interest, not public oversight in the public interests. This is worse than what already exists.

Virtually all the democratic protections, paltry as they were in previous legislation, have been stripped out of the new omnibus law. There are no principles at all to guide restructuring, no mention of equity, no open board meetings for the super agency, no appeals of restructuring decisions, no requirement for public input or democratic process. There is no evaluation system for the vast new restructuring. There was no public consultation prior to this Bill. In fact, the first job of a public health care system is to measure and plan to meet the population’s need for care. But the Ford government’s new health care omnibus bill does not require the super agency (or anyone else) to actually do this.

Given how opaque the whole process has been, it is hard to know whether the Ford government realizes the full scope and implications of what it is doing. In the coming weeks, we will learn whether they will hold any public hearings at all on the new law. Not only because we have a longstanding process of legislative democracy that should be respected, but also because it is essential to sound policymaking, the Ford government must hit “pause,” engage in proper public consultation and make a new priority of actually improving access to public health care services for the people of our province.