Merge the strikes! Merge the tiers!

We are all for the Green New Deal!

Make Detroit the Arsenal for a Green Economy!

This is a historic day, especially for those of us here in Detroit. We are at the center of not one but two strikes:

The nation-wide strike by 46,000 UAW members to determine fate of GM, Ford and Chrysler autoworkers which will have ripple effects for the entire working class and gm communities, right here in Detroit and Warren, in the US and globally. 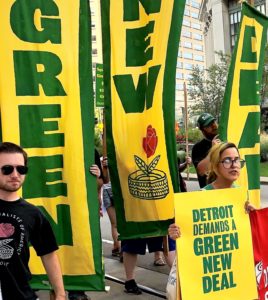 The other strike, today’s youth-led global climate strike, is a huge step in our fight to shape the fate of our planet, the fate of human civilization and all living things.

As Detroiters, it is our historic duty and obligation to merge these two strikes so that they are one, do you hear me?

I say historic duty because we are faced with challenges of great consequence not unlike the rise of fascism and German imperialism at the start of World War 2.

Detroiters responded then to the call by FDR, and UAW’s Walter Reuther, who demanded the auto plants be converted for war production a year before Pearl Harbor, in response to the threatened Nazi invasion of Great Britain.

The plants were operating at half capacity as the USA had still not emerged out of the Great Depression, despite FDR’s “New Deal.”

Within months and over the objections of the auto tycoons, the plants were converted to produce war planes – including the famous car plant in willow run. Workers flooded into Detroit to work the assembly lines; the city was transformed into a massive employment hub. Detroit was so strategic in defeating fascism in World War 2, we were honored with the title – the “Arsenal of Democracy.”

Brothers and sisters. We have a far more sinister and grave war on our hands today, a war to defend our planet from environmental ruin and climate chaos – a war for our civilization. 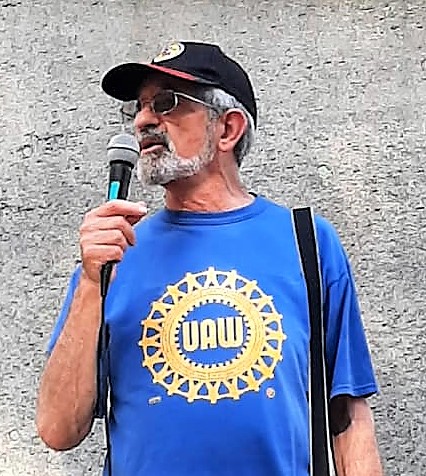 Let’s turn to the other strike – right here at our doorstep – at General Motors. GM’s Mary Barra flagrantly violated the intent of the 2015 National Agreement by “un-allocating product” at 5 plants in North America (and two overseas).

The timing was not coincidental. She decided to withhold our livelihoods to continue the procession of concessions by the workers – the concessions that were agreed to under the threat of bankruptcy. In the name of “job security,” GM succeeded in creating 2, 3, 4 tiers so they could make super profits off workers’ backs.

This strike is all about ending these demoralizing practices. The autoworkers are demanding to merge the tiers, so there’s only one tier, tier 1. Are you with them?

We are at a moment when GM workers — with the support of the climate movement – must demand new product at the “un-allocated” plants to take on climate chaos. We must demand the production of electric cars, electric trucks, electric buses, and rail cars for public transit to create the jobs we need for a green economy — now!

We are not alone. Our Canadian sisters and brothers at the GM Oshawa plant –are fighting back and leading the way. When Barra said that plant was going to close, the autoworkers occupied the factory. They sat down right on the line as a show of worker resistance. While not a complete victory, they did defend some of their jobs and have won product for a new green economy.

Better yet, their union UNIFOR passed a resolution for a “Workers’ Green New Deal” – “a massive investment in clean energy, green technology, and electrification.” They included a demand for “public ownership of key manufacturing and resource sectors as the only way to protect manufacturing capacity and jobs for now and the future.”

For a short time before WW 2, we – in effect- nationalized the auto plants for a higher national     purpose. There’s no saying we can’t do it again. We must.