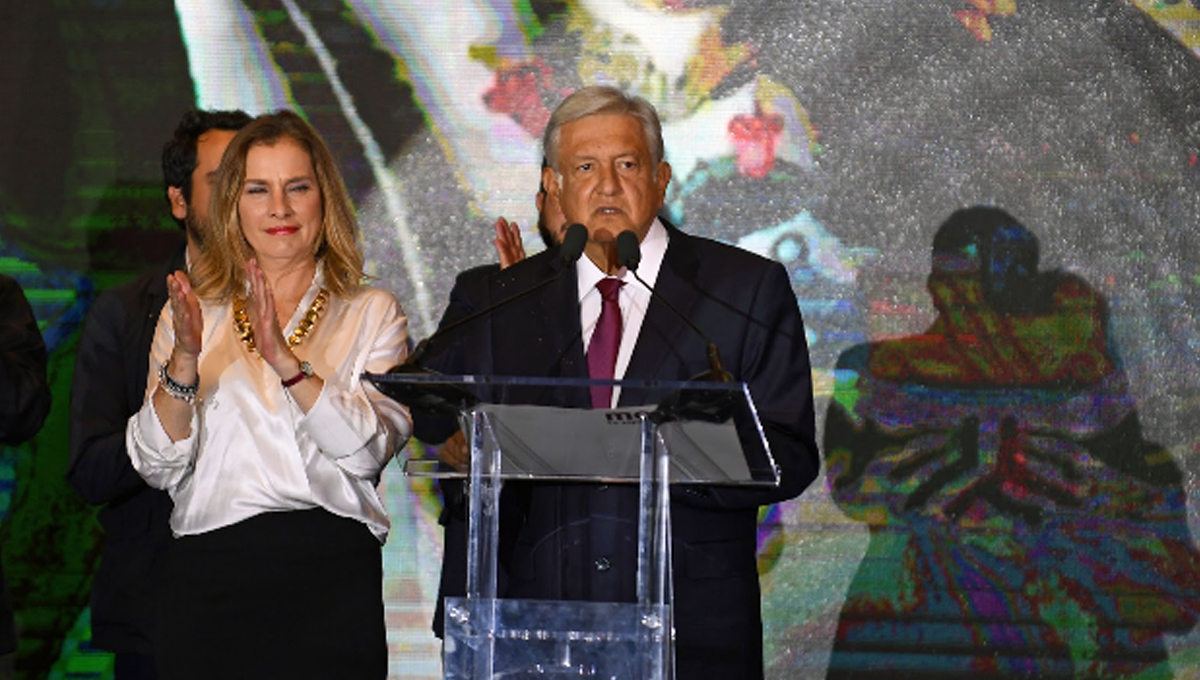 Exclusive for TRNN by Tamara Pearson

The current voting tendency according to Mexico’s National Electoral Institute (INE) is toward a victory of leftist presidential candidate, Andres Manuel Lopez Obrador, with early results of 53.8% of the vote. With participation rates at 62.9%, Ricardo Anaya came in second with 22.1% to 22.8% of the vote.

Lopez Obrador will be the first non PRI or PAN (Institutional Revolutionary Party and National Action Party – both conservative ) president in almost a century. His party supports “zero tolerance” of security force corruption, a law against conflict of interest, an “accelerated” transition over to renewable energy, and a return to peace in the streets and homes.

The presidential tendency figures are based on a quick vote of a random selection of just 7,787 booths out of 157,000. Official rsults are being counted by a separate system, called the PREP, starting at 8pm on voting day, and continuing for 24 hours after that, with irreversible results likely tomorrow morning and a final and full result within a week.

Lopez Obrador ran for president on behalf of the Together We’ll Make History coalition and his party, Morena. He was running against the All for Mexico coalition candidate, Jose Meade – which includes the PRI, and PAN and For Mexico to the Front coalition candidateRicardo Anaya.

At 9 pm people were already lining up in Mexico City’s main square to celebrate Lopez Obrador when he gives his victory speech.

Within a few hours of booths closing, Meade conceded defeat, closely followed by Anaya, with only exit polls to go on. Exit polls estimated Lopez Obrador’s lead at 20-25%.

Polls from companies like Reforma, Parametria, El Financiero and Consulta Mitofsky in June had Lopez Obrador ahead of Anaya by 17-26%.

However, most Mexicans have little faith in their electoral system, with just 2% believing there is complete democracy in Mexico. In 2006, Lopez Obrador lost his campaign for president, claiming there had been fraud. He said at the time that “there has never been democracy in Mexico.” In the 2012 elections, just 64.34% of eligible voters voted.

The INE confirmed it received 98,454 postal votes from Mexicans living abroad. All up though, 89 million Mexicans were eligible to vote and choose the president, as well as 628 positions in the upper and lower houses of the national parliament (the Congress of the Union), as well as local governors and mayors.

In Mexico City, exit polls and the quick count have Claudia Sheinbaum, a left-wing, environmentalist Jewish scientist, as head of government. She would be the first woman elected to hold the position.

If official results confirm Lopez Obrador as the winner, he won’t be sworn in until December 1.

Overall, Mexicans reported higher voter turn out this time, as well as significant problems at voting booths, with many running out of ballots. The queue for one booth in the capital was “several miles long” according to Delia Arias, who lined-up at 7 am, with booths officially meant to open at 8 am. She said it was “freezing, and they have limited ballots. It’s an impossible, incredibly broken process. But god damn it, I’m here to vote.”

“Special booths” like the one Arias was at are set up for those who are traveling or for other reasons aren’t able to vote at their designated booth. The INE says these booths have a limit of 750 ballots each.

According to Arias, by 9 am, thousands were already realizing they would miss out and were turning around to go back home. She said despite getting there so early, she was number 433 to vote, but after a bus full of elderly people was given priority, her number was changed to 515. Ultimately, it took her seven hours to vote, while Father Miguel Guerra, in Acapulco, said it took four hours, after “the head of the booth arrived late … they wrote numbers on our arms and counted out 750,” he said.

In Puebla state, one of the special booths was set up at the bus terminal. Francisco Leon reported on social media from there, “Three hours waiting to vote, and the ballots have run out.” In Mexico City, where many people travel interstate for work, studies, or healthcare, some citizens in Periferico Avenue even set up a road blockade demanding to be able to vote, and here is a video of voters in Benito Juarez, Mexico City, chanting “we want to vote” after 5,000 people allegedly weren’t able to.

Other people, at 10 am, were reporting that their booth still hadn’t opened. In Veracruz state for example, INE officials reported that at 9.00 am only 595 of 10,595 booths had opened. By midday, only 70% of the voting booths in Chiapas had opened.

Javier Ramirez told The Real News there was “complete disorganization” at his booth. “I got there at 8.15 am and I had to wait until 9.30 to vote. There is no organization at all. For example, the lines by last name weren’t set up and they ended up making one line outside the booth. The officials didn’t know what to do.” Other booths experienced violent attacks, such as this one in Baranca Honda, Puebla, and this woman turned up to vote, only to see that her sister, disappeared seven years ago, had already supposedly voted.

Puebla booth attendant Nancy Ibanez denounced that people entered her booth and shot at the ballot boxes and “beat up people; we took refuge under tables and benches.” Further booths in Puebla and around the country also later reported shootings and that their full ballot boxes had been stolen.

Meanwhile, some indigenous groups rejected the electoral process outright. The Zapatista movement rejected the “rotten” system, and in Nahuatzén, Michoacan indigenous groups told authorities they wouldn’t allow booths in their communities. These communities elect their own leaders. The governor of Michoacan then announced a military-police operation and transported ballots in armed and unofficial vehicles, to avoid detection, but late last night thousands of these ballots were found burnt, along with voting credentials.

On the other hand, Gabriela Hernandez, in Mexico City, was surprised that people, especially the youth, were “putting up with the long queues,” in order to vote.

It seems that with the hope of a non PRI-PAN candidate winning, many have been inspired to vote, despite what Hernandez called “this lousy (electoral) system.”

In the lead-up to today’s elections 120 candidates and politicians, mostly competing for local positions, were murdered. Further, 29,168 people were murdered last year, with some journalists declaring the outgoing Enrique Pena Nieto government (PRI party) “one of the most corrupt in the country’s history.”

Tamara Pearson is a journalist living in Puebla, Mexico. She has spent the last 17 years covering politics and social struggles in Australia, Venezuela, Ecuador, and more. She’s the author of The Butterfly Prison, blogs at Resistance Words and can be found @pajaritaroja.

Tamara Pearson is a journalist living in Puebla, Mexico. She has spent the last 17 years covering politics and social struggles in Australia, Venezuela, Ecuador, and more. She’s the author of The Butterfly Prison, blogs at Resistance Words and can be found @pajaritaroja.