Baltimore Advances Bill that Could Force Incinerators to Shut Down

Baltimore City Council’s Land Use and Transportation Committee voted on Wednesday to advance a bill that could force the city’s Wheelabrator trash incinerator—the big white smokestack off Interstate-95 emblazoned with the city’s name—to shut down.

The Clean Air Act (Council Bill 18-0306) passed unanimously through the council’s committee on Land Use and Transportation, 7-0. The full council will vote on the bill on Monday, and it is expected to pass. It will then head to Mayor Catherine Pugh’s desk for final approval.

At a rally before the hearing, Councilman Ed Reisinger (D-10), the bill’s sponsor and the committee’s chair, said the Clean Air Act is necessary to promote environmental justice in Baltimore.

The bill would require both facilities to adhere to much stricter pollution regulations or shut down. Nitrogen oxide emissions, which have been linked to asthma and other respiratory issues, cardiac disease, and cancer, would be limited to a concentration of 45 parts per million.

Wednesday evening’s committee hearing sparked fierce debate. Proponents said the bill was necessary to clean up the air in one of the nation’s most polluted cities. They said incineration emits more carbon and pollution than landfills. But dozens of Wheelabrator’s employees filled the hearing room to oppose the bill. Many testified in support of Wheelabrator, which they say has brought them good-paying and fair jobs.

The Wheelabrator incinerator employs 65 people. Supporters argued that the city could create far more than 65 jobs by investing in recycling, composting, and waste-reuse programs.

“We know that actually moving away from incineration creates a lot more jobs, and that it’s the job of communities, of labor unions, and of the cities to create a model that is supportive of union jobs,” said Matteo Colombi, a union representative of the International Brotherhood of Teamsters.

Jim Connolly, Wheelabrator’s vice president of environmental health and safety, said the company would support the bill with amendments. Reisinger said no amendments were being considered.

Connolly said Wheelabrator is being attacked.

“Passing, unamended, will certainly have the effect of closing Wheelabrator,” he testified. He said the bill was unfounded and that his company had been the victim of a “baseless media campaign.” Wheelabrator is already in compliance with the emissions regulations imposed by the U.S. Environmental Protection Agency, he said.

“Compliance does not mean safety,” said Dante Swinton, an organizer with Energy Justice Network. He said that the Wheelabrator trash incinerator is the city’s single largest source of air pollution, and that emits half of the city’s CO2 emissions.

At the hearing, a Department of Public Works official said the city had yet to determine how much the city would have to pay to comply with the Clean Air Act, but state analysts told WBAL it could be on the order of $125 million over three years. Austin Pritchard, Wheelabrator’s plant manager, said that shuttering the facility would come at a cost to the city.

“We contribute 9 million [dollars in taxes] each year,” he said.

Energy Justice Network, an environmental organization, says that incineration is more expensive than landfilling. They also say the city could raise money by investing in alternative waste management strategies. “According to the EPA., 75% of what we dispose of is recyclable or compostable,” he said. “If the city had recycled 75% of what we threw out in 2017, we could have saved over $3 million in tipping fees,” said Swinton.

He said the reuse value of the items Baltimore throws away is in the tens of millions—another potential source of revenue. “Imagine the change some $50 million of direct reinvestment into communities would do for Charm City,” he said.

“I hope it’s worth the sacrifice to invest in the health of the citizens of Baltimore,” said James Alston, a resident of the city’s Westport neighborhood, near the Wheelabrator incinerator. He said neighborhoods like his have borne the brunt of environmental injustice for decades. 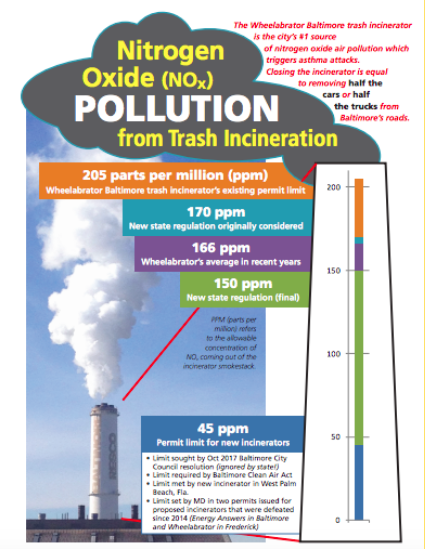 “Newer incinerators in Maryland would be subject to these regulations,” said Energy Justice Network founder Mike Ewall. “Maryland issued permits for two to be built—an Energy Answers one in Baltimore and another Wheelabrator one in Frederick—and both proposals got shut down, but if they hadn’t, they’d have to be in compliance with the regulations on emissions, the ones in our Clean Air Act.”

The act would also require the incinerators to continuously monitor emissions of 20 major pollutants and make the results public in real time. This is already a requirement for Montgomery County’s trash incinerator.

The day before the committee hearing, residents all over Baltimore recieved mailers from Wheelabrator. “The Clean Air Act Is Not A Solution,” the mailers say.

@WTIEnergy-Baltimore. Desperation. These are synonyms. Wheelabrator sent out these mailers to misinform the city about what they actually are doing, and that is contributing massive pollution. The showdown is tomorrow at City Hall, @wbaltv11, @ssdance, @WMAR2News , @wjz. pic.twitter.com/8wzTaoQOAQ

They mailers say the U.S. EPA prefers trash incineration to landfilling because it reduces greenhouse gas emissions by approximately 1 ton for every ton of waste processed.

“The EPA have been apologists for incinerators for years, yes,” said Energy Justice Network’s Ewall. “But their own research does not back up that claim.” Ewall said the EPA’s data shows that in terms of CO2 emissions, incineration is 2.5 times worse than coal.

“I laughed when I saw that,” said Ewall. “Incinerator operators don’t know what is coming out of their smokestacks most of the time. Except for a few air pollutants that are tested continuously, the rest are monitored once a year, or not at all,” he said in a statement.

“If we regulated traffic the same way we do smokestacks, we’d let drivers drive around all year with no speedometer,” he said. “Once a year, there’d be a speed trap on the highway, with signs warning, ‘slow down… speed trap ahead’—and the driver’s brother would be running the speed trap, because the companies do their own testing,” he said. In 2011, the Maryland Department of Energy fined Wheelabrator for exceeding mercury pollution found during an annual test.

Critics say the solution is to invest in zero-waste solutions like composting and recycling. Maryland requires that 35% of waste in all localities is recycled, but Baltimore’s official recycling rate is 28%.

“DPW needs to develop a plan for recycling,” said Reisinger.

The fight for the Clean Air Act comes years after a successful campaign to stop the construction of another incinerator in Baltimore. In 2010, the Maryland Department of Environment issued a permit for the company Energy Answers to build the nation’s largest incinerator in Curtis Bay, Baltimore’s most polluted ZIP code. After a years-long campaign, activists defeated the proposal: The state yanked the permit in 2015, and the project was never built.

In 2016, City Council passed a nonbinding resolution to move the city toward zero waste and “advance sustainability, public health and job creation.” Last month, the council passed another resolution to call for Maryland to support a proposal that would stop the Wheelabrator incinerator from receiving millions of dollars in green subsidies.

Supporters know that conforming to the Clean Air Act won’t be an easy process, but that unless it’s passed, Baltimore will keep stalling instead of taking real action.

“We cannot wait forever and wait until dinosaurs roam the earth,” said Councilwoman Mary Pat Clarke (D-14). “We need to set time limits and standards and deadlines because that’s the only way that planning ever happens.”

Supporters say inaction is only harming Baltimore residents, especially those in the mostly Black neighborhoods around the Wheelabrator and Curtis Bay Energy facilities.“The future is now,” said Clarke.