City Council Calls for ‘No More Cash for Burning Trash’

Maryland has issued $10 million in green energy subsidies to Baltimore’s Wheelabrator trash incinerator—the white smokestack off Interstate-95 with red letters that say “Baltimore” down its side—over the past six years, even though it is the city’s largest source of air pollution. A new City Council resolution aims to change that.

“Our incinerators here in Baltimore City are getting subsidized while they’re spewing pollution into the air,” said Councilmember Mary Pat Clarke at the council meeting. “We don’t want the state of Maryland that we live in and are trying to clean up to be subsidizing practices that are not beneficial to the clean air we seek.” Clarke was one of 11 members of City Council to sponsor the resolution.

During their first meeting of 2019, Baltimore City Council approved a resolution that calls on the state of Maryland to pass the Clean Energy Jobs Act. The act would change the renewable portfolio standard—the state policy that determines what is considered renewable energy and what qualifies for green subsidies—to exclude incineration. It also calls on Maryland to invest $27 million in workforce development for careers in sustainable industries, and to double the amount of renewable energy produced and used statewide, moving the state to 50% renewable energy by 2030.

Before the meeting, eight council members and their supporters held a rally outside City Hall. Holding a giant paper mache model of Wheelabrator’s smokestack, they chanted, “no more cash for burning trash.” 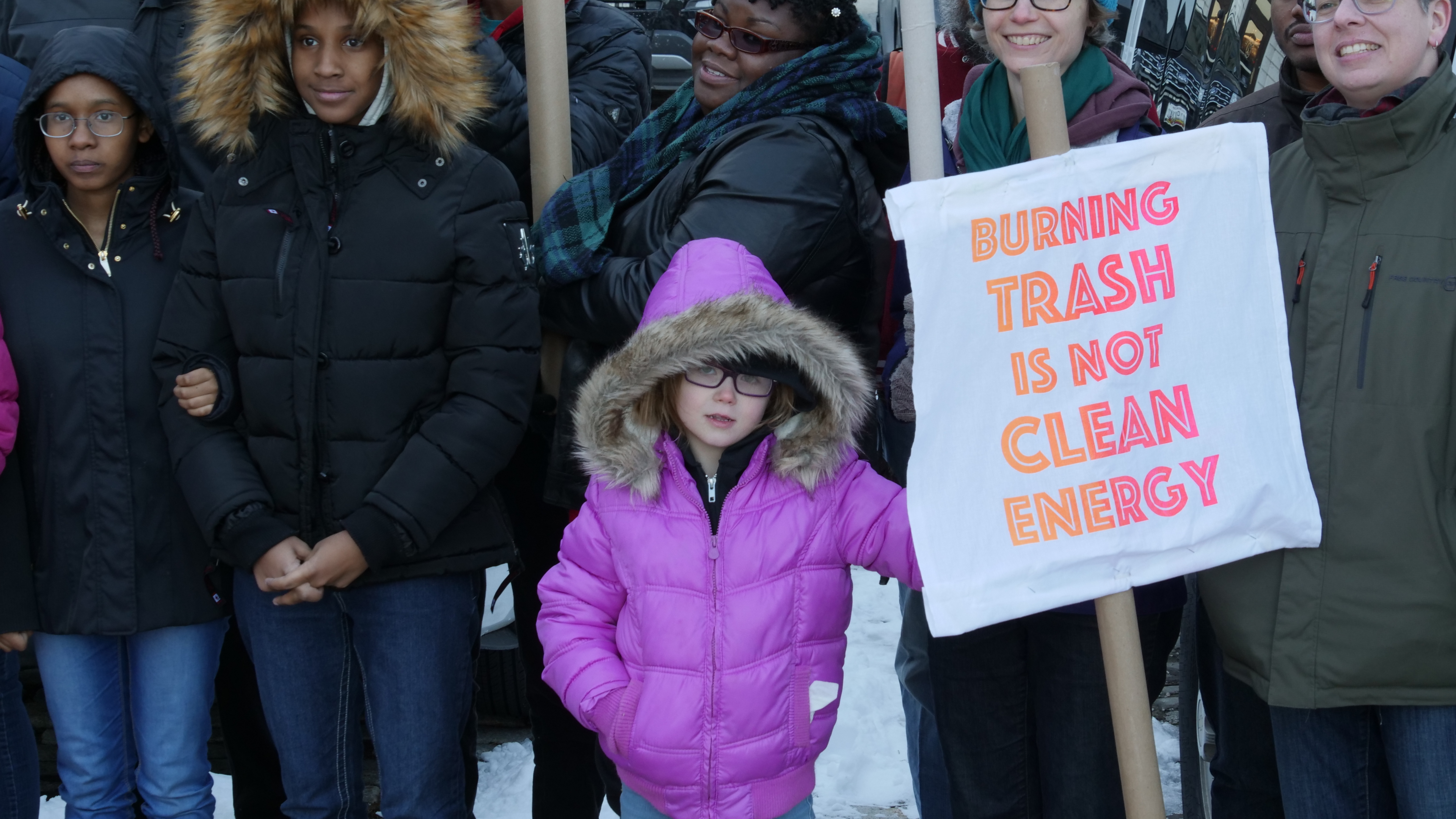 “We are paying an incinerator to poison our air,” said Destiny Watford, an organizer with United Workers and Free Your Voice, who led a successful campaign to fight the construction of another incinerator in her neighborhood of Curtis Bay. “It creates one third of the air pollution in the city and emits things like lead and mercury and [nitrogen oxide] at some of the highest levels in the state, [which] can cause things like lung cancer, respiratory disease, asthma.”

The Wheelabrator incinerator in Southwest Baltimore burns most of the city’s trash—some 700,000 tons a year. In addition to lead, mercury, and nitrogen oxide, it emits carbon dioxide, formaldehyde, and hydrochloric acid.

These emissions have the worst impact on nearby residents. According to the EPA, Curtis Bay residents breathe in some of the most polluted air in the nation. Leon Brooks, an 18-year-old student at Watford’s alma mater Benjamin Franklin High School, says he’s seen the effects first hand. He lives in Baltimore’s Brooklyn neighborhood, just a ten minute drive from Wheelabrator, and his brother has asthma.

“Before we moved over there, his asthma wasn’t that serious, but since we’ve lived there for like two or three years, it got worse,” Brooks said. “He’s got to have a pump everywhere he goes.”

Meleny Thomas, who organizes with United Workers and teaches Brooks through their South Baltimore Youth Corps program, is particularly concerned about the effects on youth like Brooks and his brother. “We’ve been talking to some of the coaches at [Benjamin Franklin] and they’re saying that they’re seeing a decrease in participation because of asthma-related issues and respiratory illnesses,” she said.

Some of the chemicals incinerators emit, like carbon dioxide and nitrogen oxide, are greenhouse gases. “As they emit greenhouse gas emissions like other polluting facilities, they are contributing to climate change,” said Smith-Hams.

Though the effects of climate change are global, Smith-Hams says they can be seen at the local level. “We had one of the wettest years on record in 2018, we’ve seen the floods, we’ve seen how it impacts communities on a day-to-day basis. So removing incineration ensures that we are taking a strong step toward a 100% renewable energy future.” She says the Clean Energy Jobs Act would put Maryland on track to reach 100% renewables by 2040.

Maryland is one of 23 states where incineration is eligible for renewable energy subsidies. Proponents of the practice say that it converts trash into a source of fuel.

But Taylor Smith-Hams, an organizer with Chesapeake Climate Action Network, says incinerating trash is more polluting per unit of energy than using coal.

“There’s nothing clean about it,” she said. “These subsidies are meant for clean sources of energy like wind and solar power, and to be subsidizing pollution, to be making people in Baltimore, in Montgomery County, places where we have incinerators in the state, pay to pollute our own communities, is just unjust.”

“We know that we have strong majority support in both the House and the Senate,” said Smith-Hams.

She said representatives are prepared to override a veto by Governor Hogan, but they hope that won’t be necessary. “We really are calling on Governor Hogan to sign this bill into law when it gets to his desk,” she said. “He has said that he wants to be a climate leader in Maryland and this is his opportunity.”

The Maryland Department of Energy has already called on the Wheelabrator incinerator to reduce its nitrogen oxide emissions by one fifth, but supporters of the council resolution say that’s not enough. 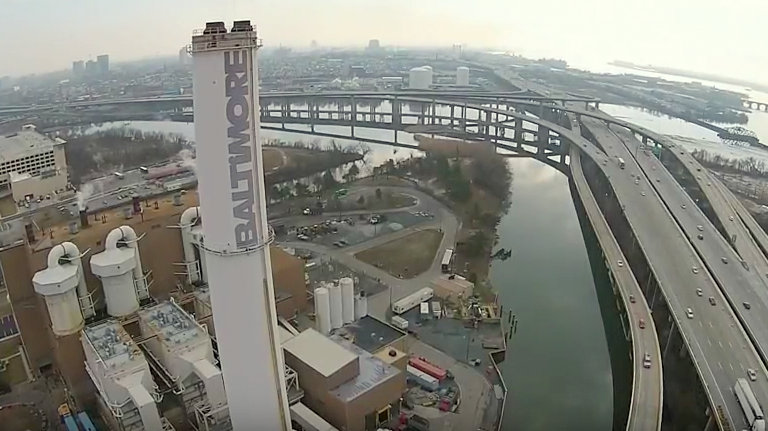 “We need to change the way we deal with our trash,” says Mary Pat Clarke. “We can’t do this gradually anymore. This has got to stop and we have got to clean up our air save our children and, by the way, our planet.”

In a statement, Wheelabrator Technologies’ Vice President of Environmental Health & Safety Jim Connolly said the council’s decision was “directly at odds with the position taken by the U.S. Environmental Protection Agency under the Obama administration, namely that ‘converting non-recyclable waste materials into electricity and heat generates a renewable energy source and reduces carbon emissions by offsetting the need for energy from fossil fuel sources and reducing methane generation from landfills.’”

“Wheelabrator Baltimore is an integral part of the state’s environmental and economic infrastructure,” Connolly continued.

But critics say this rationale is a form of greenwashing. “Burning trash is not clean energy, and [Wheelabrator] is not a green facility,” said Jennifer Kunze, an organizer with Clean Water Action. “Why should Maryland be subsidizing power generation that’s in many ways dirtier than coal, when the same subsidies that should be going to the truly renewable energy sources Maryland needs to clean our air and face the climate crisis?”