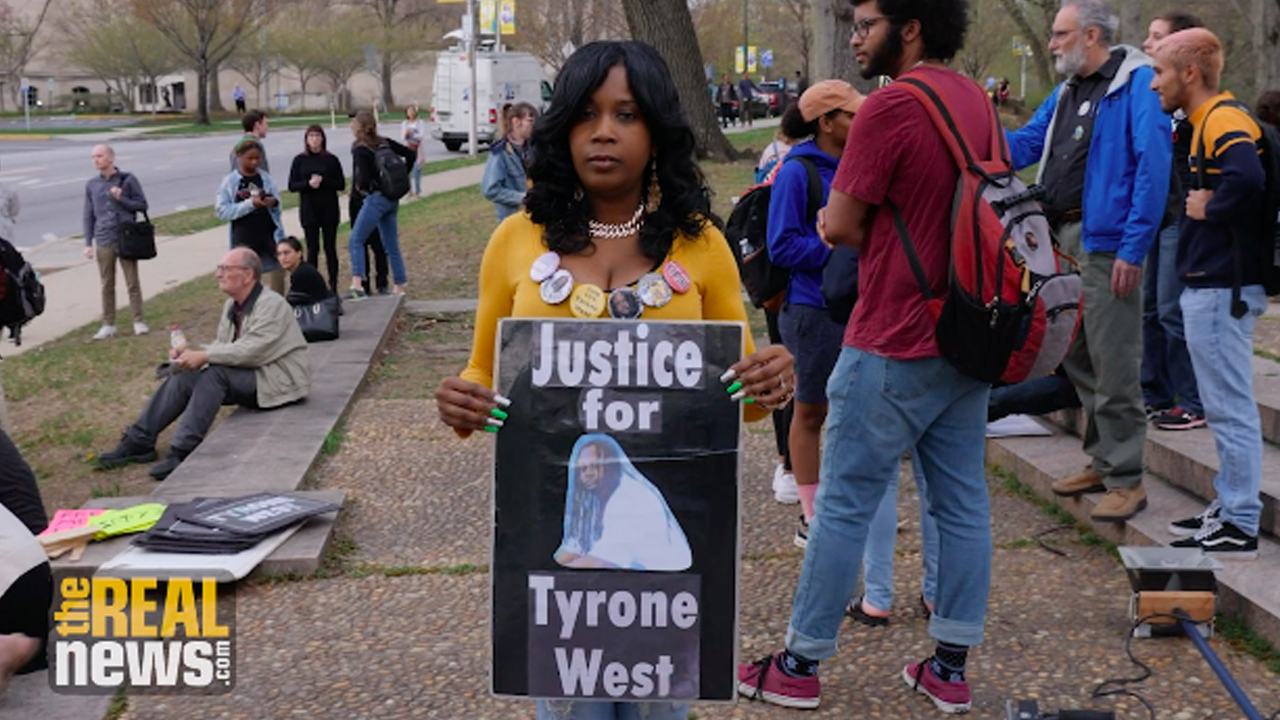 Tensions over the authorization of private police for Johns Hopkins boiled over this week, when university officials threatened a prominent Baltimore activist with legal action if she went on campus to participate in a student sit-in.

The university informed the attorney of Tawanda Jones they have “safety concerns” over public access of the ongoing protest at Garland Hall. On Wednesday eight students chained themselves to the building to demand a meeting with administrators.

Students at Johns Hopkins have chained themselves to the University’s admin. office, escalating a nearly month long protest against a private police force and ICE contacts. This is student Adela Chelminski pic.twitter.com/frUjxMjQDk

Jones is the sister of Tyrone West, an African-American man who was killed by police during a car stop in 2013. His death was controversial and Jones has been calling for the officers involved to be charged.

In a statement, a Hopkins spokesperson said the warning was prompted by concerns students were occupying a building after it was closed.

“We are asking for protest gatherings to remain outdoors, and we are reminding protesters and others that entering the building when it is closed (6pm to 7am on weekdays and during the weekend) is a violation of the university conduct code and is trespassing.”

But on Wednesday shortly after 8pm, over 100 students and community members defied the threats and rallied inside the administration building.

Protestors defying administration’s threats of legal action and entering student occupation at Johns Hopkins, after the building has been closed to the public. 8 have chained themselves to the staircase blocking access to the presidents office pic.twitter.com/2ryma0y2aI

Protesters have been demanding the university end its multi-million dollar contract with ICE and abandon efforts to deploy a private police force on campus.  State legislators passed a law earlier this year authorizing the university to hire up to 100 armed officers who will patrol both the Charles Village campus the hospital complex in East Baltimore.

Every Wednesday for four years, Jones has held a “West Wednesday” protest to demand justice for her brother, Tyrone West, who was killed at the hands of Baltimore police officers in 2013. This week’s West Wednesday will be the 300th, and is set to be held in Greenmount and 33rd Street, about half a mile east of Hopkins Homewood campus. One of the officers involved in West’s death was a Morgan State police officer. Hopkins recently received authorization for their own armed, private police force from the state.

On Tuesday, Jones said in a phone call that she is undeterred, and will “absolutely” continue to draw attention to her brother’s case and seek justice for other victims of police brutality.

“On her 300th week fighting to hold the officers that murdered her brother accountable, we continue to hold JHU, Baltimore city officials, and other campuses accountable for being complicit in violence against Tyrone West and our communities” Andrea Fraser, JHU Ph.D. candidate said in a press release.

Hopkins students and alumni are taking part in West Wednesday as part of a national day of action against the militarization of college campuses. According to organizers, protests are to be held on 28 campuses.

“Tawanda Jones and victims of police violence continue to be brutalized by unaccountable police systems. We as students unite with our neighbors demanding equity and accountability against police violence and the prison industrial complex,” Fraser said.

“I did receive a call from a rep., from Johns Hopkins action would be taken if she continues to trespass.” Francis-Williams said Hopkins mistakenly implied that Jones was leading the sit-in and “action would and will be taken against her because she’s not a student.”

“She’ll continue as an invited guest unless they give notice they are barring her from the campus, and then we’ll take next steps accordingly.”

CORRECTION: This article originally mischaracterized Hopkins’ warning to visitors of the student occupation. We regret this mistake.