Thousands have gathered in Yemen for the funerals of the 51 people killed in a Saudi-UAE-US military alliance airstrike, including 40 children traveling on a school bus. Even after a Raytheon-made MK-82 bomb was found in the wreckage, Defense Secretary James Mattis told said that the US is "not engaged in the civil war." We are joined from Sana'a by journalist Nasser Arrabayee.

Thousands have gathered in Yemen for the funerals of the 51 people killed in a Saudi-UAE-US military alliance airstrike, including 40 children traveling on a school bus. Even after a Raytheon-made MK-82 bomb was found in the wreckage, Defense Secretary James Mattis told said that the US is "not engaged in the civil war." We are joined from Sana'a by journalist Nasser Arrabayee. 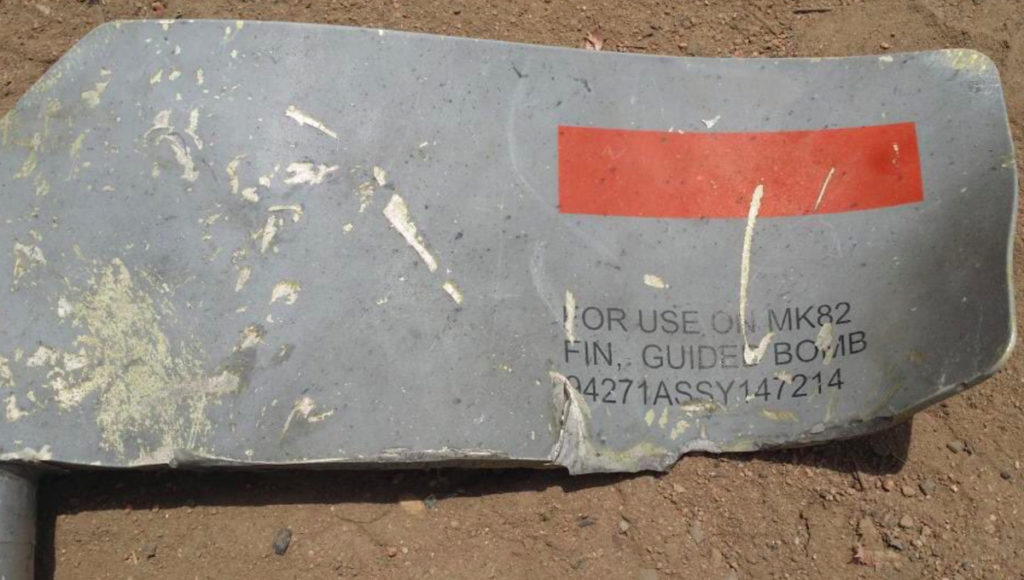 AARON MATE: It’s The Real News. I’m Aaron Mate. Thousands have gathered in the Yemeni city of Sa’dah for the funerals of the 51 people killed in a Saudi-UAE-U.S. military coalition’s airstrike last week. The dead included 40 children. A group of boys were traveling on a school bus for a field trip marking their summer school graduation. This video was taken not long before their bus was hit.

Not long after that video was taken out was when that bus was bombed. In addition to those 40 children and 11 adults killed, the bombing also wounded some 79 people, including 56 children. Family members are still searching the bus wreckage for the remains of their children. What has also turned up in the wreckage are the fragments of U.S.-made bombs. Photos from the scene show pieces of a Raytheon MK82 freefall bomb, which theU.S. has sold to Saudi Arabia as part of its vital support for the assault on Yemen. In Washington, State Department spokesperson Heather Nauert declined to call for an independent probe.

HEATHER NAUERT: And we call upon all parties in any kind of situation like this to take appropriate measures to try to mitigate the risk of civilian casualties. DOD and other entities put out reports on this after the fact as they all start to investigate. And so we will look forward to any information on that.

AARON MATE: Joining me from Yemen’s capital of Sana’a is Nasser Arrabyee. He’s a journalist and filmmaker. Welcome, Nasser. We are speaking just as the dead are being buried, a massive funeral procession being held. Tell us what you know about the funerals today, and what you know about what happened during the bombing.

NASSER ARRABYEE: Thank you very much for your interest in Yemen, because what Yemen needs is more attention to such war crimes, Saudi, U.S-Saudi war crimes. For the funeral of today, tens of thousands attended this funeral. Funeral of the children who were killed in their bus on August 9. That is the latest U.S.-Saudi war crimes. It is not the first, and maybe not the last, of course. So people who attended to Sa’dah from many provinces, not only from Sa’dah. And it was a funeral with grandeur and pageantry as a sign of defiance, because defiance, when we say defiance we mean Yemenis are defending themselves. Yemenis are not attacking anyone. These crimes are not against only Yemen humans, but against everyone. These crimes threaten everyone in this globe.

AARON MATE: And Nasser, in terms of, in terms of the bombing, tell us what you know. You circulated on social media. A photograph taken from the scene of the bomb fragments that appear to show that the bombs were MK82, made by Raytheon, sold to Saudi Arabia as part of the critical U.S. support that has been provided for this war. So tell us what you know about the bombing itself, the bombing scene, and the presence of these U.S.-made bombs.

NASSER ARRABYEE: For the U.S.-made bombs are not only in this, are not only found or were not only found in this in this attack. They were found in many, many, many, many, many more. And everybody saw them. But for this in particular, it was very clear that these remnants that we boasted, that everyone boasted in social media, were from that site. There were many people who are independent, who are not Yemenis, reporters of some international media and also some people, some representatives of Human Rights Watch and Amnesty International. And I mean, there are some representatives here in Yemen. And now they are collecting these things. And if anyone has doubts about this, what these things are and where they came from, they could also make sure.

AARON MATE: Nasser, finally, let me ask you your response to the head of the Pentagon, Defense Secretary James Mattis. He was asked on Sunday about this bombing where U.S. bombs were found, and this is what he said. He said, quote: We are not engaged in the civil war. We will help to prevent, you know, the killing of innocent people. Unquote. And then he went on to say that he will dispatch a three star general to Saudi Arabia to help find out what happened. But I was curious to get your thoughts on the head of the U.S. military, James Mattis, saying that theU.S. is not engaged in the civil war in Yemen.

NASSER ARRABYEE: This is very funny. You know, James Mattis is not talking about Saudis because they, you know, they, Trump loves Saudis, and James Mattis loves Saudis, and they love their dirty money. This is OK. But let me tell you something as Yemeni, an observer, as an observer, as a journalist, I would tell you that what engagement would mean if, if they refueled the airplanes in the middle of the sky, and if they, if they do the surveillance and the reconnaissance, and the minesweeping, and selling their weapons. And so what would- I mean, what more James Mattis wants to say we are engaged? He’s doing all this. He’s doing all these things. And we as Yemenis, we, from day one we are sure that Saudis would not have gone to the war at all if there is no, I mean, without the U.S. approval, without the U.S. consent, without the U.S. support and everything.

So this is very funny. I mean, everybody knows that America is doing this, and America is killing Yemen. Unfortunately. You know, I myself, you know, I myself am, you know, as secular- I’m secularist. I’m not Shiite, I’m not Sunni. But what I’m seeing with my eyes and what I’m hearing is something that, that is, you know, violating everything that I know about America, and about the value, American values, and human rights, and democracy, and all these things. So this is something that is, you know, when we see this senior official saying this, it’s very funny. I mean, it’s, it’s destroying the U.S. values, unfortunately.

AARON MATE: We’ll leave it there. Nasser Arrabyee, journalist and filmmaker, speaking to us from the Yemeni capital of Sana’a. Thank you.

NASSER ARRABYEE: Thank you very much.