TRNN Replay: The Intermediate-Range Nuclear Forces agreement is one of the most important international treaties and its cancellation will mean a full return to the nuclear arms race and closer to nuclear disaster, says Peter Kuznick of the Nuclear Studies Institute at American University

TRNN Replay: The Intermediate-Range Nuclear Forces agreement is one of the most important international treaties and its cancellation will mean a full return to the nuclear arms race and closer to nuclear disaster, says Peter Kuznick of the Nuclear Studies Institute at American University 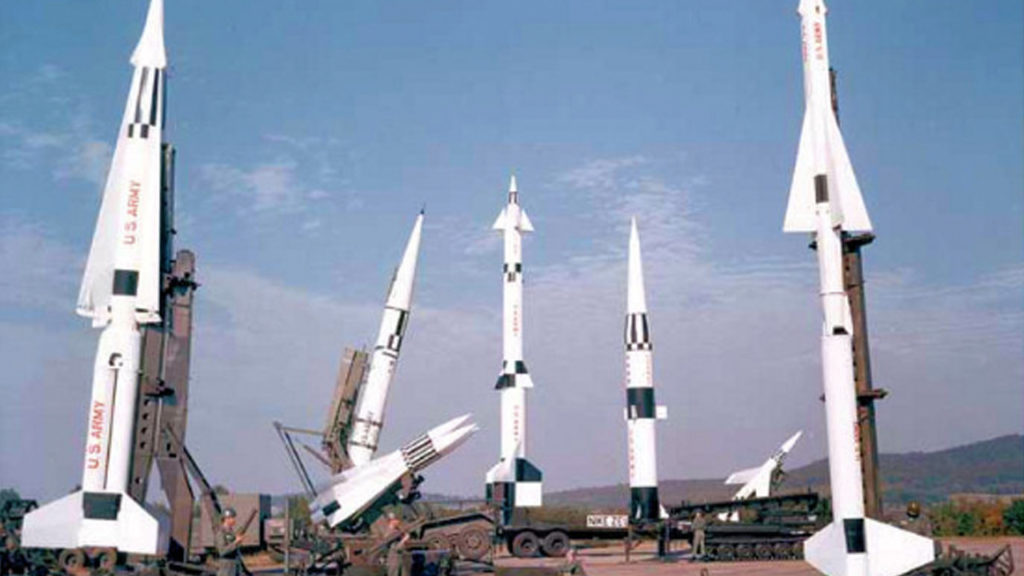 President Trump’s decision to withdraw from the Intermediate Range Nuclear Forces Treaty represents yet another treaty that the U.S. has decided to tear up. Already the Trump administration has withdrawn from the Paris climate agreement, and has threatened to withdraw from various other trade agreements. National Security Adviser John Bolton is in Russia this week, where he met with President Vladimir Putin of Russia to discuss the U.S. withdrawal from the INF treaty. This treaty, which President Reagan and Soviet leader Mikhail Gorbachev signed in 1987, was the first nuclear treaty to reduce nuclear arsenals. It eliminated 2700 missiles stationed in Europe, which had a range of between 500 and 5500 kilometers. Both Russia and the United States have long claimed that the other is in violation of the treaty. Here’s how Bolton explained why the U.S. is withdrawing at a press conference in Russia on Tuesday.

JOHN BOLTON: With respect to the question of Russian compliance, as I’ve said, it is the American position that Russia is in violation. It is Russia’s position that they’re not in violation. So one has to ask, how do you convince the Russians to come back into compliance with obligations they don’t think they’re violating. The problem is there are Russian INF missiles in Europe now. The threat is not American withdrawal from the INF treaty. The threat is the Russian missiles already deployed.

GREG WILPERT: Joining me now to discuss the significance of the U.S. withdrawal from the INF Treaty is Peter Kuznick. Peter is Professor of History and Director of the Nuclear Studies Institute at American University in Washington, D.C. Also, he’s the co-author of the book The Untold History of the United States, together with Oliver Stone. Thanks for joining us again, Peter.

GREG WILPERT: Let’s start with the significance of the treaty. John Bolton actually dismissed its importance, saying, quote: “There is this new strategic reality out there. This was a Cold War bilateral ballistic missile treaty in a multipolar ballistic missile world.” Is the INF treaty treaty obsolete, as Bolton claims?

PETER KUZNICK: No. It’s by no means obsolete. In fact, as John Huntsman, the U.S. ambassador to Russia said, it was the most important treaty that we have in terms of American security. This treaty was- let’s go back a little bit to the history of it. In the 1980s there was a very tense situation when the Russians put SS20s targeting Europe, and the NATO and the U.S. put Pershing missiles and cruise missiles into Western Europe. That was a dangerous standoff. Had missiles been launched toward Moscow, the Soviets had ten minutes or less to respond. With intercontinental ballistic missiles, they might have a half hour to respond. These would have required an almost instantaneous response.

So the situation was very dangerous. There were enormous protests across Europe in opposition to the U.S. putting those missiles there. And so in order to alleviate that tense standoff, Mikhail Gorbachev took various initiatives, and he pushed Reagan for some meetings and arms control agreements. What came out of that was the Reykjavik meeting in 1986. And that Reykjavik meeting, that historic meeting where they almost agreed, Reagan and Gorbachev, to eliminate offensive nuclear weapons completely. Reagan got hung up on Star Wars. Had Reagan been willing to eliminate one word, then we would have been able to get rid of nuclear weapons overall in 1986. In some ways, the consolation prize was the INF treaty.

In 1985 we had about 70,000 nuclear weapons in the world with a destructive equivalent of approximately 1.5 million Hiroshima bombs. The situation had become insane, really. We had enough weapons to destroy the world over many times. And then we stepped back from the brink. Got rid of the intermediate range ballistic missiles in Europe. We began an arms control treaty. We cut the number of nuclear weapons down to- now it’s about 14,500. That’s still enough to trigger nuclear winter. It’s still enough to eliminate all life on the planet. But compared to where we were, it’s relatively a safer situation.

So you look at what we’ve done. In 2001 we announced we were going to abrogate the Antiballistic Missile Treaty, which went into effect in 2002. Now we’re getting rid of the Intermediate Range Nuclear Forces Treaty. In 2021 we want to end the New START Treaty. We are in danger of going back to where we were in the 1980s, where there’s a possibility of another uncontrollable arms race. Nobody benefits from that.

Earlier this year the Bulletin of the Atomic Scientists moved the hands of the Doomsday Clock to two minutes before midnight. That’s the closest we’ve come to doomsday, according to the experts, since 1954, after the U.S. and Soviet Union both tested their hydrogen bombs. The Soviet bomb test wasn’t actually a hydrogen bomb, but it was close enough. And so they moved the hands to two minutes to midnight. After the Cuban Missile Crisis in 1962, a measure of sanity began to be interjected into U.S.-Soviet relations. And that had lasted- conditions, relations, as you know, got much tenser during the Obama administration. And now under Trump we’ve reached an even more dangerous situation, with the possibility of real nuclear chaos.

We threaten nuclear war against North Korea. We abrogated the Iran nuclear deal. The U.S. withdrew from that, which was very much in America’s interest. Very much in the world’s interest. And beginning November 4, we’re threatening any country that continues to buy oil from Iran and have economic relations with Iran with heavy United States sanctions. Europeans were already very, very upset about U.S. policy because of the Iran deal, and because of the U.S. tariffs and trade war against Europe, and now with this we’ve even gone further. So maybe the British and the Poles are pleased with this decision. But certainly the Germans and most of the Europeans, our NATO partners, are very unhappy about this.

GREG WILPERT: I just want to turn now to the present situation; that is, with regard to the issue of the INF Treaty’s violation, which was the argument that Trump and Bolton have been using. As I said earlier, each side has accused the other of violating it already. In the Obama administration that accusation was levied, but before that already each side had accused each other. What’s the history of the claims with regard to violations, and what do you think is happening in that regard?

PETER KUZNICK: The United States has accused the Russians of testing and deploying a Tomahawk cruise missile that we say has a range of more than 500 kilometers. The Russians say it does not have a range of 500 kilometers, that it’s a lower range. The United States is basing this on highly classified information. There is no transparency. The basis for their allegations have not been released. And the Russians have not done anything to convince the world that it is not over the 500 kilometer level. They have done that, apparently, in response to the U.S. deploying ballistic missile defense. The Russians allege that our missile defense has an offensive capability within the range of 500 to 5500 kilometers. So both sides are making allegations against each other.

However the important thing is that the U.S. had decided to do this based on the urging, largely, of John Bolton. So Bolton became national security adviser in July of this year. He brought in Tim Morrison, another super hawk, onto the National Security Council. He had formerly been with the House Armed Services Committee. And between the two of them they took the initiative on arms control away from the State Department, and really away from the most in the Defense Department, and they are the ones who engineered this effort.

So the other factor that they claim is that China is not part of this treaty. The U.S. and Russia have 93 percent of the world’s nuclear weapons. China has a very small arsenal. China has a total of 280 nuclear weapons now. And the fact that China is not in this treaty is not really, does not really affect the U.S. security position. Because as bad as relations have become with both Russia and China on the part of the United States, the United States- this only affects ground-launched ballistic missiles. Ground-launched missiles. It does not affect the U.S. sea-launched missiles. It does not affect the U.S. air-launched missiles. We are certainly in a position to take care of any threat from China with what we’ve got already.

But the danger, as you know, is that all sides, every nuclear power, all nine of them, are modernizing their nuclear arsenals as quickly as possible. This we can lay at Obama’s doorstep. It was Obama who agreed to a trillion-dollar modernization of every aspect of America’s nuclear arsenal. We know that officially now they say it’s $1.2 trillion dollars. But the real estimate is $1.7 trillion dollars. And that is to make America’s nuclear weapons more usable. It got worse with Trump’s new Nuclear Posture Review of February this year. And then Putin’s March 1 state of the nation address. Putin announced that Russia now has five new nuclear weapons, all capable of avoiding America’s ballistic missile defense.

So the world has gotten much more dangerous. I would not be surprised to see the Bulletin of the Atomic Scientists move the hands of the Doomsday Clock closer to midnight, because it’s much more dangerous now than it even was in January this year.

GREG WILPERT: OK. Unfortunately we’re going to leave it there for now, but I’m sure we’re going to come back. I’m speaking to Peter Kuznick, Professor of History and Director of the Nuclear Studies Institute at American University. Thanks again, Peter, for having joined us today.

Peter Kuznick is Professor of History and Director of the Nuclear Studies Institute at American University in Washington, DC. He and Oliver Stone co-authored The Untold History of the United States.