Will the International Criminal Court Prosecute Israel for War Crimes?

Rania Muhareb and Tareq Zaqoot of Al Haq discuss the IDF's shooting of hundreds of unarmed protesters, including women, children and journalists

Rania Muhareb and Tareq Zaqoot of Al Haq discuss the IDF's shooting of hundreds of unarmed protesters, including women, children and journalists 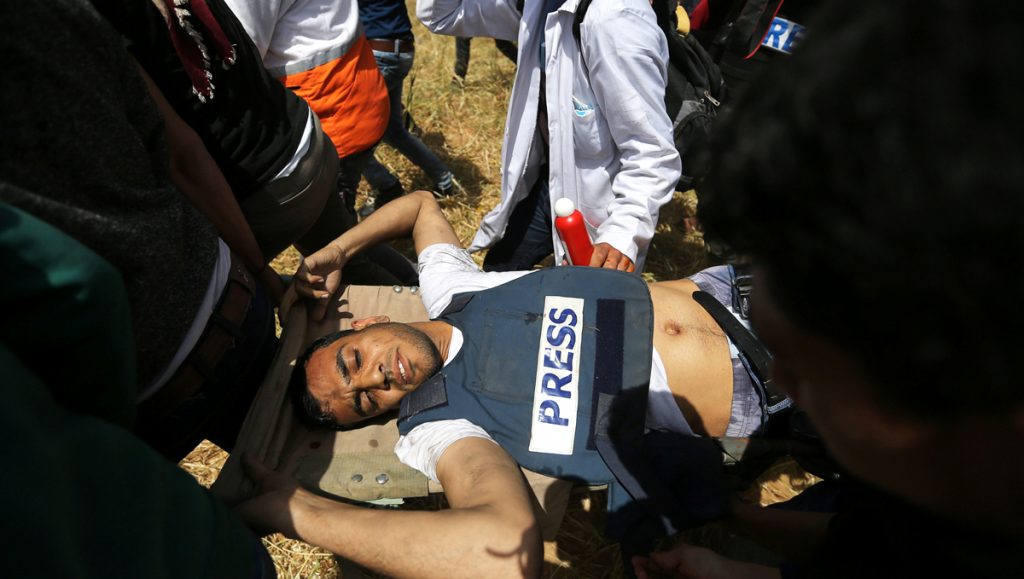 DIMITRI LASCARIS: This is Dimitri Lascaris, reporting for The Real News Network from Montreal, Canada. On March 30th, the day that is known to Palestinians as Land Day, thousands of protesters in the blockaded and heavily populated enclave of Gaza began a series of peaceful protests, known as The Great March of the Return. These protests are intended to culminate on May 15th, which is known to Palestinians as the Nakba Day, or the Day of Catastrophe. Nakba Day is a commemoration of the expulsion from Palestine in 1948 of an estimated seven hundred thousand Palestinians, and the destruction and depopulation, by Zionist forces, of hundreds of Palestinian towns and villages. During this year’s Great March of the Return, Israeli snipers have killed dozens of Palestinian protesters, and wounded hundreds of others. As the Nakba Day approaches, there seems to be no relaxation by the Israeli military in its brutal response to these protests.

Now, here to discuss with us what is happening on the ground are two representatives of Al-Haq, a human rights organization founded in 1979, and based in the occupied Palestinian territories. Rania Muhareb is a legal researcher with the Palestinian human rights organization, Al-Haq. She holds an LLM in International Human Rights and Humanitarian Law. She joins us today from Ramallah, in the occupied West Bank. Tareq Zaqoot has worked with Al-Haq as a field researcher in the Gaza Strip since 2008. Over the past 10 years, Tareq has monitored and documented human rights violations perpetrated by both Israel and the Palestinian Authority, and he has covered and documented three Israeli offensives against Gaza. He joins us today from Gaza itself. Thank you very much for coming on the real news, Rania and Tareq.

DIMITRI LASCARIS: Thank you. Tareq, let’s first talk about the casualty figures up to the current time, and since the beginning of the protests on March 30th. How many Palestinian civilians, according to your work, have been killed and how many have been wounded by the Israeli military in these protests?

DIMITRI LASCARIS: And how many journalists have been killed and wounded by the Israeli military in these protests?

TAREQ ZAQOOT: Of course, we are still counting the number of injuries. As of now, we have been able to document some twenty cases of journalists injured.

DIMITRI LASCARIS: And how many casualties, Tareq, have been reported on the side of the Israeli military?

TAREQ ZAQOOT: There is not one injury among the Israeli occupation soldiers, and anyone following the Israeli press will see there is no record whatsoever of injuries among Israeli soldiers.

DIMITRI LASCARIS: Now, Tareq, Doctors Without Borders just released a statement within the last few days, in which it revealed that its doctors have been “receiving patients with unusually severe injuries, many of which are extremely complex to treat. Such serious injuries will leave many of these patients with long term physical disabilities.” Tareq, have you observed or come across evidence that Israeli forces are using ammunition that may be specially designed to inflict particularly severe and debilitating injuries on those who are wounded?

TAREQ ZAQOOT: We have not been able to certify the type of ammunition, as this requires experts in this field. Yet, we have been able to document such cases, the nature of the injuries, and the type of ammunition used. There are serious injuries that we documented through doctors and the collection of tens of affidavits. Live ammunition has caused the laceration of bones and blood vessels. We have twenty-eight cases of amputation of limbs as of now, among them, four children. The nature of the ammunition used is unknown. However, it is causing very serious injury. THis is what we’ve seen through our documentation of numerous cases.

DIMITRI LASCARIS: Now, Tareq, it’s claimed by the Israeli military that the protests have been organized by Hamas, and that many of those shot were supporters or members of Hamas, and that some or many of the protesters have been throwing rocks at soldiers at the fence. Have you seen evidence that these protests have been organized by Hamas, have you seen any of the protesters engage in any acts of violence, such as rock throwing? How, in general, do you respond to the claims being made by the Israeli military about the organizers of these protests and their relationship to Hamas?

TAREQ ZAQOOT: Okay. March 30th, 2018 is a national commemoration for Palestinians, in which they mark Land Day. That day, the peaceful march began, tens of thousands, all age groups, including children, women, and entire families, located within the Palestinian territory in entirely open areas, close to the border fence. These protests emerged in a spontaneous manner through popular mobilization. How did we get here? The enclosure of the Gaza Strip, eleven years of blockade, and a number of successive crises. The protest leaders former the High National Commission for Great Return March and for Ending the Blockade. The title of the march is clear, and as announced by the Commission and the protesters, it will continue until May 15th, which is another commemoration day that will mark the seventieth anniversary of the Palestinian Nakba. The protesters want to express their demands, their will, and right of return, in line with United Nations Resolution 194. They consider this their inalienable right, which as of now is yet to be realized.

As such, the protests were overall peaceful. We did not observe any armed presence within the protests. As well, the protesters posed no threat whatsoever to the Israeli occupying soldiers. They were peacefully protesting, some waving the Palestinian flag, others chanting national slogans, while some were burning tires in areas close to the border fence. Tens of protesters tried to approach the barbed wire to hang the Palestinian flag on it or to cut pieces of it. When we talk about the barbed wire, it must be noted that there is a main border fence thirty meters from the barbed wire, with Israeli soldiers positioned behind elevated sand hills at least fifty meters within the main border fence. This means there is a large distance between the protesters and the Israeli occupying forces.

DIMITRI LASCARIS: Let’s suppose, just for the purposes of argument, that one or more of these protesters who have approached this fence are, in fact, supporters or even members of Hamas, but that they are unarmed, so that they’re in no position to actually inflict injury upon the soldiers on the other side of the fence. What does international law have to say about how the occupying army can conduct itself in the circumstances? Does the mere fact that an unarmed protester is a member of Hamas confer a right on the occupying army to shoot the protester?

RANIA MUHAREB: As you know, these are peaceful protests, as my colleague has just confirmed. They are peaceful protests of civilians, and even if there are members of Hamas within the protest, the fact of them being unarmed offers them protection under international law. And Israel, as the occupying power, in the policing of a peaceful assembly, such as The Great March of Return, must be guided by the principles of necessity and proportionality in the use of lethal force. This means that the occupying forces may only use lethal force when absolutely necessary, in order to protect life. And this is clearly not the situation that we’re talking about here. And the evidence of this is that the International Criminal Court even came out and said, Israel may be committing war crimes in targeting peaceful civilian protesters in the Gaza Strip. And this is exactly what we are documenting, as well, at Al-Haq. We are documenting excessive use of force, but not only excessive, also premeditated and intentional use of force. This means that there is an actual order given to Israeli soldiers to use the force that we have document. And we see this in the casualties and the types and nature of injuries that my colleagues are discussing and are documenting on the ground.

If I can quote one Israeli official, on the types of orders given to the Israeli occupying forces, and the soldiers that are positioned at the fence- you may know a few days ago on 21st of April, an Israeli brigadier general and former head of the Southern Command of the Israeli occupation forces, discussed in a radio interview how such commands are given. And I quote, he says, “I know how these orders are given, I know how a sniper does the shooting, I know how many authorizations he needs before he receives an authorization to open fire. It is not the whim of one or the other sniper who identifies the small body of a child now, and decides he’ll shoot. Someone marks the target for him very well and tells me exactly why one has to shoot, and what the threat is from that individual. And to my great sorrow, sometimes when you shoot at the small body and you intend to hit his arm or shoulder, it goes even higher.” So, this is just to show that we are dealing with premeditated, intentional use of force, and a shoot to kill policy that we at Al-Haq have been documenting for decades. Which means that Israel’s response to the Great March of Return is none other than intentional commission of willful killings and war crimes, and has nothing to do with the nature of the assembly itself.

DIMITRI LASCARIS: Rania, do you have any reason to believe that the International Criminal Court might actually take action in this particular case?

DIMITRI LASCARIS: So, Al-Haq and partner nations in Gaza, including the Palestinian Center for Human Rights and Al Mezan, have made a submission to the International Criminal Court indicating the names of the victims and the killings that have been perpetrated by the Israeli occupying forces since the 30th of March. We’ve not only indicated the names of those killed, we’ve also indicated an intention to use- an intention to kill, and to shoot to kill Palestinian protesters, which may constitute a war crime of willful killing.

We’ve also discussed the injuries that we are documenting, which may amount to the war crime of willfully causing great injury and suffering to civilians. So, this submission has been made to the International Criminal Court on behalf of Palestinian human rights organizations, and we have urged, in the submission, we urged the prosecutor to immediately request the opening of an investigation into the situation. As you know, the ICC is currently conducting a preliminary examination into alleged war crimes and crimes against humanity being committed. And we hope that, considering the ongoing nature of these crimes, the ICC will take action. But we also urge, of course, third states to impose sanctions on Israel for its continued commission of crimes and grave breaches of the Geneva Conventions.

DIMITRI LASCARIS: The Real News has been speaking today to two researchers of the human rights organization, Al-Haq, which is based in the occupied Palestinian territories. Rania Muhareb and Tareq Zaqoot, thank you very much for joining us today.

DIMITRI LASCARIS: And this is Dimitri Lascaris, reporting for The Real News from Montreal, Canada.