Part 3 of Paul Jay and Aaron Mate’s interactive discussion with viewers about the real reasons Trump should be considered a traitor by the American people – From a live recording on August 2nd, 2018

Part 3 of Paul Jay and Aaron Mate’s interactive discussion with viewers about the real reasons Trump should be considered a traitor by the American people – From a live recording on August 2nd, 2018 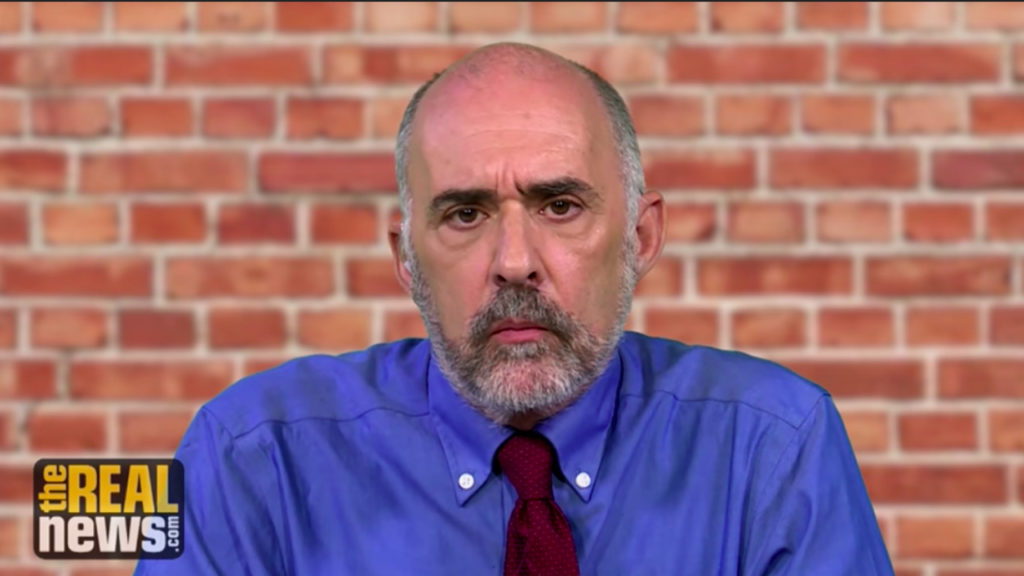 AARON MATE: Getting to Iran and Russia, I guess my, my sense of Putin is that he’s an opportunist. Politically he plays all sides, kind of like Qatar in the Middle East. They have ties pretty much at this point to everybody, except for Saudi Arabia, which is their bitter foe. And my sense is that no matter what, however Putin feels about Iran and Trump’s designs for it, that he’s sort of boxed in. On the one hand he can’t alienate, he can’t risk alienating the U.S. and Israel, because they could hurt Russia even more. But at this point, also, Russia does have ties to Iran. It’s investing billions of dollars into its economy. And Iran helped act as a sort of counterweight to U.S. hegemony, which Putin feels threatened by. So I’m just wondering, how much do you think Trump could rope in Putin to whatever plans he has for Iran?

PAUL JAY: Well, you know, one doesn’t know what actually gets talked about. And there’s not a lot of public statements that I’m aware of of how the Russians view the regime change strategy of the United States, even though I know Mattis is claiming they don’t have a regime change strategy. But Trump’s clearly articulated it, and so has Bolton, and many others that have come and gone from this administration; not least of all Steve Bannon, who I think still is in the ear of Trump.

Well, if you look at it objectively in terms of who gains and who loses, I don’t see how Putin loses. And can I just say one thing before I say this? Because I don’t want to just keep saying Putin. Putin represents the Russian state. He represents a system. He’s at the helm of the state. It’s not all about Putin. You know, it’s a whole convergence of a lot of interests, the same way it is here. It’s not much different. So that being said, I’ll say Putin. But by Putin, we mean this whole system of oligarchs and apparatchiks in the state, and so on.

If they do nothing, they win. What I mean by that is they don’t have the power to block the United States ratcheting up economic sanctions on Iran. To some extent maybe they can try to go around the sanctions. But I don’t think the Russians are going to get into a big confrontation with Trump and the Iran agenda, because what, what happen? The more things ratchet up with Iran, the more the price of oil goes up. They’re already talking now just because of the coming sanctions in November that oil probably is going to hit $80. And again, as I said earlier, real confrontation, you could start seeing $250-300 barrel of oil, which is wonderful if you’re an oil country. And Russia is an oil country, and so is the United States is an oil country. And the Koch brothers are practically a country. There’s a lot of people that gain from this tension.

And one should never underestimate- and you can watch all the interviews we’ve done with Larry Wilkerson on this and others- you cannot underestimate the banal economic motives behind so much of U.S. foreign policy. You know, weapons and oil to mostly drive U.S. foreign policy. And so the the weapons that are being sold into the Middle East, largely because the Saudi-Iranian tensions- it’s beyond imagining the trillions of dollars of arms expenditures by the Middle Eastern countries, mostly buying American arms. The tension leading to higher price of oil. All of these things factor into U.S. foreign policy and driving it. And even though, while sections of the American economy will suffer with high oil prices, it could spark a much more serious, a very serious recession the United States. Still, arms and oil are going to cash in on that. And Wall Street finance, they can play all kinds of games around volatility. They love volatility. Yes. The more things go up and down, the more money the insiders of Wall Street make.

So Putin, if he just doesn’t do much, wins. He needs to- he’ll do some rhetorical denounciation, that the U.S. shouldn’t threaten Iran this way; especially if they try some military action in Iran, Putin will condemn it. But oil prices go through the roof. And where does Iran go for help? Well, there’s only two places Iran can go: Russia and China. And so, you know, Russia, one, objectively doesn’t have the power to stop the Americans from doing much in Iran. But I can imagine that when they met, you know, as I said, Trump could have, might have said to Putin, don’t try to save the Iranians the way you saved the Syrians. And I can see Trump saying yeah, sure, because it’s in his interest to let this thing unfold. It doesn’t mean there is, you know, Iran isn’t potentially a good economic partner for Russia.

But you know, the levels of power that- this is the thing about, part of the deception of the American craziness about Russia. The disparity in power between Russia and the United States is ridiculous. Russia is barely a mid-level economy and mid-level power. Now, sure they have a big nuclear arsenal. Sure they have a big army. But not on the scale that they can assert Russian foreign policy in a direct confrontation with the U.S. Syria came as close as possible to that. But even in Syria there was a lot of American collaboration. They needed the Russians to come and stabilize, and help get rid of ISIS, and all this. It wasn’t such a direct confrontation in Syria as some people might have suggested.

So yes, so I think Putin lays back. Maybe says a lot of stuff, but essentially lays back.

PAUL JAY: And if I understand it correctly, the Russians actually reduced their military budget a little bit last year.

AARON MATE: Yes. Well, because- I guess the thinking there is because now they can control our minds through social media they don’t need a strong military.