Annette Groth discusses the three demands by the U.S to Germany to increase its military power and presence overseas, and the new right-wing minister of defense Annegret Kramp-Karrenbauer. For now Germany is loathe to send troops or ships to Syria or Hormuz, but Kramp-Karrenbauer has already announced her intention to increase military spending to 2% of GDP, which would turn Germany into a military giant

Annette Groth discusses the three demands by the U.S to Germany to increase its military power and presence overseas, and the new right-wing minister of defense Annegret Kramp-Karrenbauer. For now Germany is loathe to send troops or ships to Syria or Hormuz, but Kramp-Karrenbauer has already announced her intention to increase military spending to 2% of GDP, which would turn Germany into a military giant 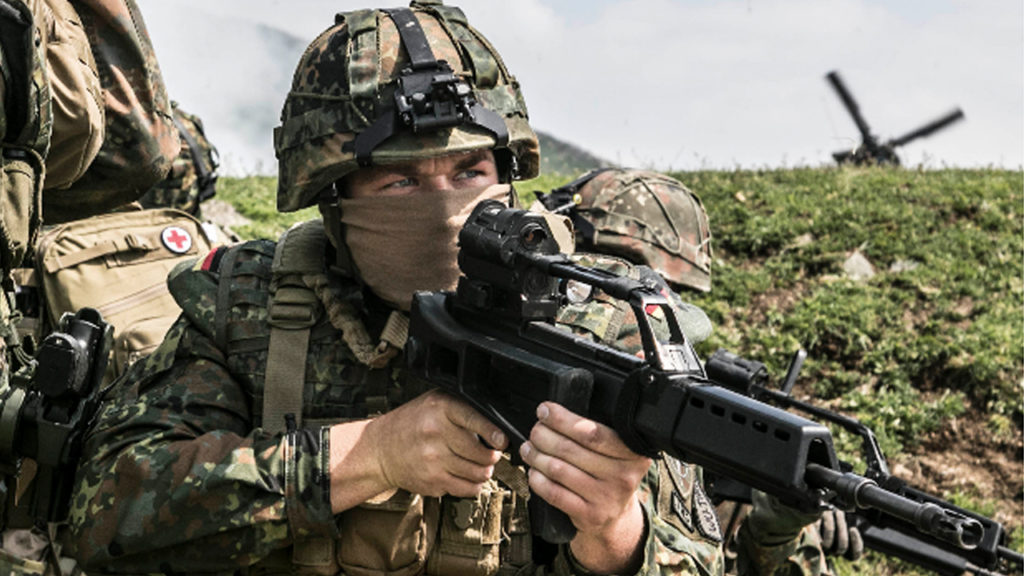 Germany’s newly appointed Minister of Defense and designated successor to Chancellor Angela Merkel, Annegret Kramp-Karrenbauer, recently announced that Germany will give in to President Trump’s demand to increase German defense spending to 2% of GDP. Currently, German defense spending is about 1.2% of GDP, and increasing it to 2% would make the German military the biggest and strongest military in Europe.

The defense minister’s announcement coincides with two other new requests from the United States. First, they requested for Germany to send troops to Syria to help the US control that area of the world, a demand that the German government eventually rejected. Second, the Trump administration asked Germany to send warships to the Strait of Hormuz. The official reason is to help escort civilian ships through the strait, but in practice, this would contribute to the naval siege of Iran. Germany’s Minister of Foreign Affairs, Heiko Maas, responded to the request as follows.

HEIKO MAAS, GERMAN MINISTER OF FOREIGN AFFAIRS: Germany will not participate in the planned naval mission put forward by the United States. We are working in close contact with our French partners. We consider the strategy of applying maximum pressure to be wrong. We do not want a military escalation, and we’ll continue to rely on diplomacy.

GREG WILPERT: Despite the rejection of increasing Germany’s involvement in the Middle East, the announcement to increase German defense spending suggests that German resistance to US demands is eroding. Joining me now to discuss Germany’s military role in NATO and in the rest of the world is Annette Groth. She’s a former member of the Bundestag for the left party Die Linke, and was also a member of the parliamentary Committee on Migration, Refugees and Displaced Persons of the Council of Europe. Thanks for joining us again, Annette.

GREG WILPERT: So what is the debate within Germany about militarization and foreign deployment? Are young Germans, for example, who are required to serve in the military, interested even in supporting the growing role for Germany’s military? And how will these policies effect the CDU’s, the Christian Democratic Party’s popularity as a political party?

ANNETTE GROTH: Very good question. Well, I guess it is not in the forefront of the major topic to be discussed among German youngsters or the youth. As you may know, as in the US and in other countries, the biggest problem for us now is housing. We have a huge housing problem. We have a dire need of more medical doctors in our health system, in our hospitals. Our complete infrastructure, mainly concerning the railway tracks, is in dire need for reparation, more investment, et cetera, et cetera. So military build-up is maybe the fifth or sixth topic, and it is at the moment, not discussed apart from the Strait of Hormuz and the military mission. But otherwise, the increase at the moment is completely neglected. I always emphasize that now we are spending this year 43 billion euro for military expenses. This is daily 120 million euro. Immense. And what could you do with 120? In a week, it is close to 10 million. So lots of repair in infrastructure, getting more personnel in hospitals, et cetera, et cetera.

So this is really pressing on our daily work and discussions for what I have as friends. And the military budget will of course, then reduce the money which is now available for social services and infrastructure. So once we have more money, even for military, then you have to reduce the other expenditure, which would be a disaster quite frankly. So it is very unpopular to talk about an increase of military expenditure. So at the moment, therefore the CDU is silent on this completely. And they are very wise to do that because you may know that we have in a couple of weeks elections in three provinces. And our right-wing party is at the moment, according to the polls, at least in Thuringia, the strongest party, which is, you know, for us a nightmare.

So they are, at the moment, other things than the military expenditure. I mean, when I read the newspapers and listen to the radio and TV about this military mission to the Strait of Hormuz, what is really missing in this debate is that it was Gibraltar, in other words the UK government, who seized the Iranian vessel on the 1st of July. This is hardly mentioned any longer and it is a breach of international law. We have international law at sea, which guarantees free passage to all of the straits. You know, it’s not only the Strait of Hormuz, but also the Strait of Kerch, plus also the Strait of Taiwan, et cetera. We have many of those. So until now there was no way even to disturb this and to break this international law.

GREG WILPERT: Right. You mentioned international law, but another issue seems to me also Germany’s Constitution. Originally, it forbids the deployment of German military forces outside of an official NATO deployment. This is something that the Allied Powers imposed on Germany and was originally much tougher, but they imposed it after World War II to prevent Germany from becoming a major military power again. Now, is this restriction at all an issue or has everyone forgotten about it?

ANNETTE GROTH: Most of the people have forgotten about it because nowadays it is so uncommon to talk about the German role in the world. You know, we are the export-leading, world export-leading country. German wealth—We have a very important role in the youth. And it is not any longer debated whether German soldiers should be deployed in other countries [inaudible] the peace movement still [inaudible] to question. Personally, I’m completely against it.

GREG WILPERT: What would it mean if Kramp-Karrenbauer, the Defense Minister, actually gets her way and increases defense spending to 2% of GDP? I mean, does Germany—What would Germany do with such a powerful military force and against whom would it be directed?

ANNETTE GROTH: Very good question. This is a – I asked myself, against what is it directed or against whom? Frankly, I don’t know. What we’ve seen of course for quite some time is fake news accusing particularly Russia for whatever kind of things allegedly Russia is doing or not doing, posing a big, enormous threat to the West and to our values on these gimmicks. But when you really look behind it—this is like Iran—it is very often simply not true. They are rumors. They are lies. They are accusations. And then of course justifying them, we need to build up our military to defend us. My goodness. Nowadays, I guess there’s no European country that is really capable to defend itself.

We, in Germany, are particularly vulnerable because we have US military bases and we are fighting for years and years to get rid of them. I was happy, I mean, so to say, when there was a discussion recently about deployment. Trump’s threatened to deploy the military bases from Germany to Poland because, you know, we are not the best allies in his point of view apparently. I say, yes, get rid of the US military bases because of Ramstein, as you may know, this is a small place where the drone attacks, all worldwide drone attacks, are being channeled through. This concerns – this has something to do with the geographical location of this place.

And then we have AFRICOM and EUCOM. So in AFRICOM, Stuttgart, I believe, is a US base for coordinating the African-US military mission and we have quite a few, sometimes with European participation and some without. And one has to ask the question, is all this military really –  is it helping us to have a better world and to have a safer place? This is simply not true. I recently read a study about the insecurity and security risks that have completely, really drastically increased due to the US military missions in Africa. It has not brought more security. It has brought more instability, more injuries, more attacks, you name it. So I mean, I guess we are ill-advised to continue with this military buildup instead of reducing military expenditure and putting it into our education, health systems and others. And this is, I guess, what is completely missing in this public discussion.

GREG WILPERT: Okay, we’re going to have to leave it there for now. I was speaking to Annette Groth, former member of the Bundestag for the left party Die Linke. Thanks again, Annette, for having joined us today.

ANNETTE GROTH: Thank you and have a good evening.