Will Gaza March End in Israel’s Worst Killings Yet? (3/3)

With the final demonstrations of the Great March of Return ahead, Israel could be preparing its worst killings of non-violent Palestinian protesters in Gaza to date, warns Norman Finkelstein

With the final demonstrations of the Great March of Return ahead, Israel could be preparing its worst killings of non-violent Palestinian protesters in Gaza to date, warns Norman Finkelstein 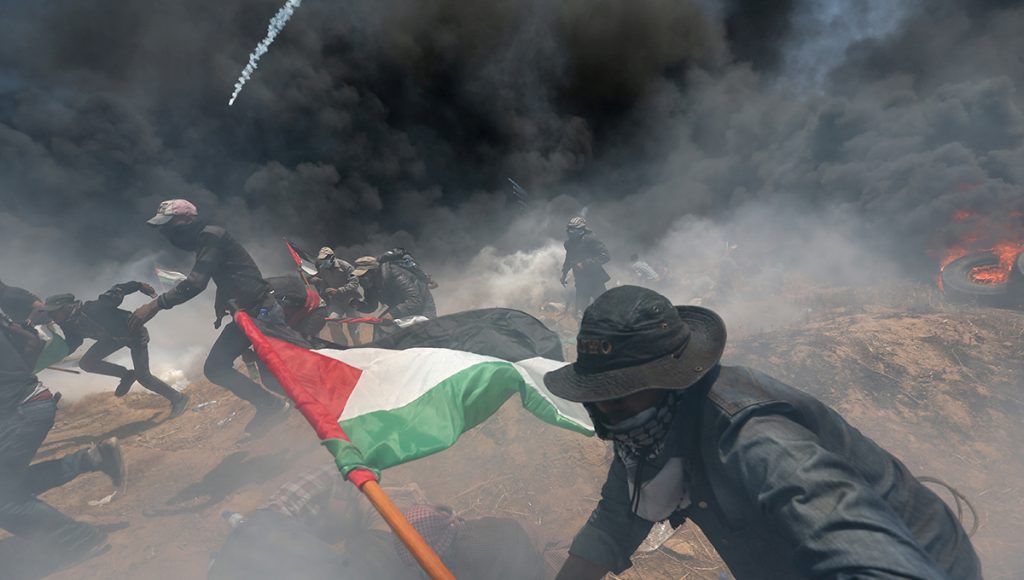 AARON MATÉ: This is The Real News, I’m Aaron Maté. We’re continuing with Norman Finkelstein, author of many books, including his latest, Gaza: An Inquest into Its Martyrdom. And we’re talking about The Great March of Return in Gaza.

NORMAN FINKELSTEIN: We’re coming up on something that can be really horrendous, because it’s been Netanyahu’s practice of always looking for some sort of diversion before he carries out a massacre. And now, all the pieces have unfortunately, regrettably, tragically fallen into place May 12- Trump backs out of the Iran deal. May 15- the people of Gaza have set as the date to try en masse to breach the prison gate.

All the attention now is focused on Iran. There are now serious concerns about the conflict between Israel and Iran escalating to the point of no return. And it’s a real possibility. Whatever you think of Sayyed Nasrallah, the head of the Hezbollah, he’s a very shrewd political analyst and he’s not at all given to scare mongering, but- and fear mongering. But the last month he said- he didn’t say probably, but he said there is a real possibility that the region is heading towards war. There is a real possibility- he’s not said that ever before.

NORMAN FINKELSTEIN: And so, we’re heading towards a a cataclysm. And then, if the cataclysm actually is realized, or even if there is a gradual escalation, a massacre in Gaza on May 15 will be a footnote. It’ll last- it’ll be in the news cycle for about five hours- “Israel killed five hundred Palestinians in Gaza.” It’ll be about five hours. It will be more or less the equivalent of the Rabbaa Square Massacre that brought Sisi to power in Egypt.

NORMAN FINKELSTEIN: He killed- estimates are, minimum about a thousand. Maybe closer to two thousand. It was forgotten.

AARON MATÉ: There wasn’t a single gun- I mean, not that that justifies a massacre. But the narrative we hear is that some of the Muslim Brotherhood-

NORMAN FINKELSTEIN: No, no. The Human Rights Watch put out a very extensive report a year after-

That’s another story- we don’t want to get sidetracked here.

But, it will be a footnote. They’ll kill five hundred people, maybe more. Honestly, I did some video conferences with the people in Gaza. And I talked about this just about two months ago. I said there is a real problem. It was just when the possibility of a war with Iran was being talked. About two months ago.

And one of the- the fellow who is now recognized as the one who was inspired with the idea of The Great March of Return- he was among those in the Skype conference. And he did ask me, I thought it was- I was struck by the question. He said, “If a war does break out, do you think we should continue?” So, it must have been less than a couple months ago- had to be like five weeks ago. He said, “Do you think we should continue?” And it stopped me short. I thought about it, and I said, “No.”

I know it will look like a loss of nerve. It will look like all talk and no action. But, I think- so, by some strange concatenation of events, it happened- everything which we were just speculating about, it actually came to be.

Right now, all the headlines are in Iran- again, Israel killed large numbers of Iranians and Syrians. I think it’s about sixteen or so, twenty-three Iranians and three civilians- five Syrians. It’s the second time they targeted the Iranians. The first time, about two weeks ago, Nasrallah said- he kept saying, “It’s a big historical mistake. They made a very big mistake.”.

But on the other hand, if you’re going to, you know, put your life on the line, expire, then you still have to choose the time. So, at least it will move the public. And I think if they choose now it will be in the headlines for five hours and then everyone will go back to Iran.

He will mow down five hundred thousand Palestinians, and then he will send some planes into Syria to kill more Iranians and get the whole thing shifted. And he’s very good at stage managing. So he knows all they have to do is kill five hundred thousand Palestinians, yes, there’ll be all sorts of outcry. And then, all they have to do then is bomb Syria one more time, target some Iranians, and the cameras will be riveted right back. And Gaza will be forgotten.

NORMAN FINKELSTEIN: So, I would say, they shouldn’t do it.

AARON MATÉ: Gazans should not march, at this point, with the world focused on Iran and Syria.

AARON MATÉ: Well, we have to leave it there. My guest has been Norman Finkelstein, author of many books including his latest, Gaza: An Inquest into Its Martyrdom. Norman, thank you.

AARON MATÉ: And thank you, for joining us on The Real News.

Norman G. Finkelstein received his doctorate in 1988 from the Department of Politics at Princeton University. He currently teaches at Sakarya University’s Center for Middle Eastern Studies in Turkey. Finkelstein is the author of ten books that have been translated into 50 foreign editions.