Why Should Americans Care About NATO/US In Africa? (Pt 2/2)

The anti-war movement rightfully focuses on the expansion of US military action around the world, but what connection does that have to everyday struggles in poor and Black communities in the U.S. like Baltimore? Why should Baltimoreans care about endless expanding war?

The anti-war movement rightfully focuses on the expansion of US military action around the world, but what connection does that have to everyday struggles in poor and Black communities in the U.S. like Baltimore? Why should Baltimoreans care about endless expanding war? 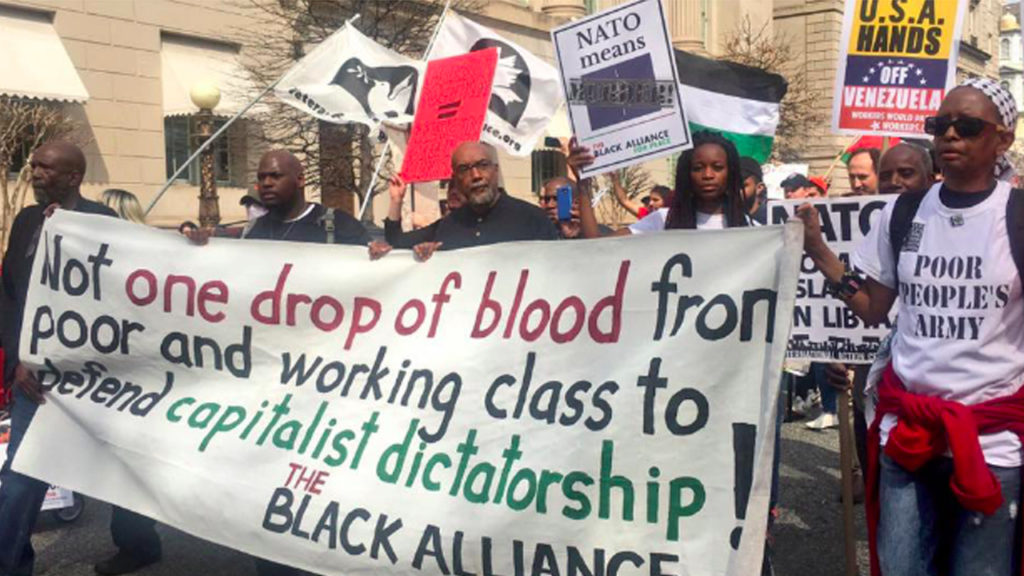 JACQUELINE LUQMAN: This is Jacqueline Luqman with The Real News.

We talked in the first segment about Black Alliance for Peace, an organization that is two years old that has a mission and a focus on reviving the black radical antiwar tradition and focus in the United States. We talked in the first segment about NATO, the far reach of U.S. militarism, and specifically what the United States military is doing in Africa, that many people in America know little to nothing about. But in this segment, we’re going to talk about what all this means to black people domestically.

To continue this conversation, I am here joined today by Netfa Freeman; Netfa is the Coordinating Committee member for the Black Alliance for Peace (BAP), he’s also an organizer with Pan-African Community Action (PCA), and Vanessa Beck. Vanessa is a member of the Black Alliance for Peace Research Committee and is also on the Steering Committee for Health Over Profit for Everyone (HOPE). Thank you both for joining me again for this second segment.

JACQUELINE LUQMAN: So we–you guys gave us a lot of information, a lot of very disturbing information; 800 U.S. military bases around the world, the expanded role of the United States military in Africa that few people know about, and NATO–the role of NATO. Let me ask you a question about NATO before we go into the domestic focus of the black radical antiwar sentiment that needs to be revived. When people think about NATO, they usually think about the expansion of NATO in regard to the response of Russia to NATO. Do you think, Netfa, that that overshadows what’s being done in Africa in regard to NATO?

NETFA FREEMAN: Yeah, it definitely overshadows. I mean, there’s nothing–I think that particularly our people need to understand what our political, economic, and social interests are. Russia is not our enemy, that’s not what’s happening. They’re killing us in the street every 28 hours, they’re not the ones mass incarcerating us, they’re not the ones with a big footprint on the African continent. That’s the United States with a big military footprint on the African continent. I don’t even know if Russia has–at most, they might have one base there. And really, what the interests are in terms of–it was strange, because they also talk about China a lot. And China is very, very present on the African continent in a lot of ways. Still, though, it’s not a military footprint. It’s in trade agreements and relationships that people could argue are for the interests of China, but still, that’s what every country, every government and people do. But they’re not bringing militarism, they don’t have the same history of overthrowing governments and CIA coup d’etats. This is the legacy of the United States.

And so, when they talk about that in the media and people end up focusing on it, we are not really focusing on things that are in our best interest or help us understand that at all. We don’t understand the legacy and the nature of colonialism, not only that it applies to a new colonialism, all the trappings of independence but with all of the same political and economic relationships and interests and power relations intact, that’s known as neocolonialism. And it exists on the continent of Africa and also applies to us as black people in the United States.

VANESSA BECK: Right. Very, very important question. So while the United States military was ramping up militarization in Africa, simultaneously the Obama administration was ramping up militarization right here, of colonized black and poor working class neighborhoods in the United States. And this involves even using some of the very same weapons and the very same tactics and techniques to kind of squash any kind of uprisings that occur. One thing I like to look at is life expectancy, like let’s take the Upton, Druid Hills neighborhood in Baltimore and compare that to life expectancy in the wealthy white Roland Park. And Roland Park, if you’re lucky enough to be living there, your life expectancy is 84, whereas in Upton, it is 68. And that is on par with nations that the United States occupies and bombs. It’s more on par with that than it is the rest of the United States.

JACQUELINE LUQMAN: So we don’t have a situation in Druid Hill where the United States is dropping bombs on the neighborhood, right, there’s no one drone bombing Druid Hill. So how is American militarism abroad affecting the life expectancy of people in poor, and especially poor black neighborhoods? Where is the connection?

VANESSA BECK: Well, militarization is not only about dropping bombs, it is also the threat of having militarized police and surveillance in a community. There are two programs, domestically in particular, that are responsible for this occupied–I was going to say occupied feeling, but it’s a reality, occupied reality in our neighborhoods. There’s the 1033 Program which allows any kind of local police to obtain military weapons from the pentagon at reduced rates or for free. And this even applies to school districts, and campus police can get these weapons.

And then we also have what has been named the Deadly Exchange Program, which is a police exchange between U.S. police and Israeli police, where they trade tactics and techniques. Now, the Israeli police is known to be one of the most violent occupying police forces that there is, and Israeli police, meanwhile, recognize that United States police are a terrorizing force on black people domestically. So there’s this intensification of militarization that we particularly see when black people are uprising here over shootings or over conditions in their neighborhoods. Then it is very much out in the open. But this affects us, just the daily stress of living under these conditions affects our health, even.

JACQUELINE LUQMAN: So under the 1033 program in particular, I’m recalling images from Ferguson, Missouri, I’m recalling images from right here in Baltimore during the Freddie Gray uprising, where you see police officers in what looked like militarized vehicles like tanks. So you’re saying that they really do come from the Department of Defense, and not only can police departments, but you also said, Vanessa, campus police and school police, as in public school police, can obtain the same type of materials?

NETFA FREEMAN: So three major campaigns, but the first one was participating in the coalition to close U.S. military bases around the world. And then we’ve done that with–since the coalition–a lot of direct action and things like that. The two main campaigns that are pretty much–it’s actually kind of one campaign, the two things. We see them as one, but two components to it, is first, the U.S. out of Africa: Shut Down AFRICOM, where–in both of these–we’re using petition drives, direct teach-ins, things like that. Going on, doing media, doing propaganda work–well, I use the term propaganda, people might not be used to it that way. So it’s really just passing around information for a particular purpose, but it becomes charged word. But we do we pass out information about it, we do media about it.

We do going on–like we went on the Hill, so we’re trying to get other policymakers to understand and maybe set resolutions or legislation, whatever, around these kind of things, briefings like the one we’re going to try to do a briefing on the Hill, get the policymakers do a briefing on the Hill about the impact of AFRICOM, as we want the withdrawal of all U.S. military presence on the continent, and then for there to be this briefing that talks about the impact of it. And then, as I mentioned, the other side of the domestic side is No Compromise, No Retreat–can you tell me the rest? It’s looking at–

VANESSA BECK: Defeat the War Against Black People in the United States.

NETFA FREEMAN: Right. And so, those are the two things. And then one part of this campaign has to be–and we actually have both organization members and individual members, so we want organizations, black organizations that want to take up this call to join Black Alliance for Peace so we can coordinate our activities around these things. One is to get the policymakers to have an unequivocal position on what AFRICOM–militarism in our communities, the 1033 program, AFRICOM, to not be–because right now they’re not even talking about it. You would think this doesn’t even exist. Just recently there was a bill–a few years ago–a bill by Grayson to repeal the 1033 program. A lot of the Congressional Black Caucus members or the black representatives voted against that bill. And right now they don’t even talk about AFRICOM, they act like they don’t even know it exists. And so, we want to change that.

JACQUELINE LUQMAN: So how do people get connected with Black Alliance for Peace?

VANESSA BECK: Well, let me say, like particularly if you are an individual or part of an organization who wants to get involved with the domestic campaign against militarism and imperialism, you can go to blackallianceforpeace.com/nocompromisenoretreat, and we’ll keep you informed as we’re rolling out this campaign. We’re in the process of talking with other organizations so that we can build a national steering committee to really ramp up the organizing on these issues. And then [email protected] is our e-mail address if you generally want to get connected. And our website, of course, blackallianceforpeace.com. And shoutout if you live in Baltimore, we’re building local alliances and helping to organize one in Baltimore. So also e-mail us at the info address.

JACQUELINE LUQMAN: Netfa Freeman, Vanessa Beck, thank you so much for joining me today to talk about this issue that is not given enough attention in the United States in general, but particularly in black communities. We will continue to have this conversation about why we need to be much more strenuously antiwar in the United States as so-called progressives, certainly so-called leftists, definitely so-called Americans. We must continue this conversation. If we want peace, we have to fight for it. This is Jacqueline Luqman with The Real News in Baltimore.