Why Do Natural Disasters Turn into ‘Poverty Disasters’?

Using the examples of hurricane Michael in Florida, the recent Indonesian earthquake and tsunami, and hurricane Maria in Puerto Rico, Bill Black explains how it is that these natural disasters keep hitting the poor far more than anyone else

Using the examples of hurricane Michael in Florida, the recent Indonesian earthquake and tsunami, and hurricane Maria in Puerto Rico, Bill Black explains how it is that these natural disasters keep hitting the poor far more than anyone else 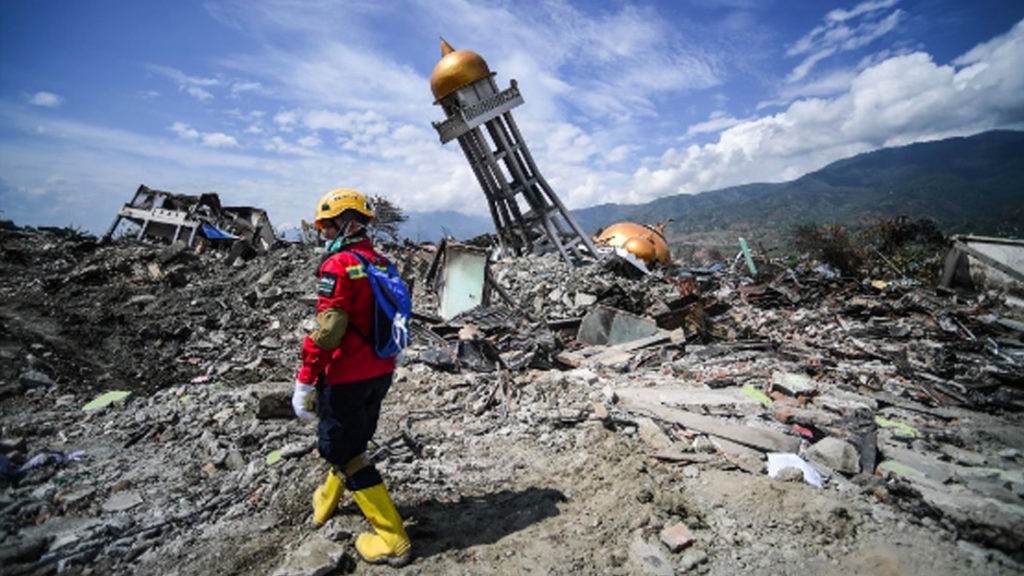 It’s been a week since Hurricane Michael hit the Florida panhandle. It was the strongest hurricane to hit U.S. mainland in decades, and is said to have caused over $1.3 billion dollars in agricultural damage alone. The frequency and intensity of hurricanes is no doubt increasing, just as climate scientists have predicted. The reason for this is that global warming is creating more favorable atmospheric conditions for more powerful storms. One thing, though, that is often forgotten or poorly explained is why it is that natural disasters such as hurricanes generally seem to hit poorer communities disproportionately harder. In other words, contrary to common assumptions, natural disasters do not affect everyone equally.

Joining me now to discuss why it is that natural disasters tend to affect poor communities far more is Bill Black. Bill is a white collar criminologist, former financial regulator, and associate professor of economics and law at the University of Missouri Kansas City. Thanks for joining us again, Bill.

So there’s a highly prestigious medical journal, the Lancet, which just published an article earlier this week which looked at mortality rates after Hurricane Maria struck in Puerto Rico, which had hit almost exactly a year ago. According to the authors, I’m going to quote, they say the ratio of observer to expected mortality was highest for individuals living in municipalities with the lowest socioeconomic development. They go on to write, quote, although all sectors of Puerto Rican society were affected, recovery varied by municipal socioeconomic development and age groups.

In other words, it’s not just that the hurricane struck poor areas harder than wealthier areas. Rather, poorer areas were more likely to receive less help and have poor infrastructure than wealthier ones. So what do you make of this finding?

BILL BLACK: Well, that is the finding that everyone has found who does research in this area for 100 years. We call them natural disasters, but they are really disasters, increasingly, of poverty. And indeed, often of pretty extreme poverty. And not just poverty, but a lack of political power. Now of course, those two are highly related. But it is the ineffectiveness of the public and private sectors in these situations that prove so catastrophic in terms of loss of life, but also frequently in terms of damage to property.

GREG WILPERT: I want to give you another example from another part of the world, in Indonesia. The New York Times recently provided an interesting analysis of the earthquake and tsunami that struck eastern Indonesia on September 28. What happened, and what conclusions do you draw from this case about the relationship between natural disasters and socioeconomic status?

BILL BLACK: Right. So, natural disasters obviously vary, and in this case we cannot predict earthquakes at this time. But we can, of course, predict earthquake danger. In other words, what is likely- which areas are most likely to have quakes, and particularly, really severe seismic events. And people probably know, again, that the standard way that we measure earthquakes is very misleading, because it’s a log scale; so that an 8 versus a 7 is not 1/7 more powerful. It’s actually ten times more powerful.

In this case, we can predict some of the things that are likely to make quakes into really big killers. And the most recent Indonesian major quake exemplifies two of these examples. So we know from the geology, and indeed a seismologist had actually predicted this specific danger in this specific city, that the way the bay was shaped could funnel a tsunami of unusually great height into population centers, and do so very quickly. In addition, the quake- as I understand it- was relatively higher, as opposed to deep in the earth, which can generate a more powerful tsunami. And then the other factor is I don’t think you mentioned in the introduction that proved so lethal, and for my time, you know, 20 years living in California we always worried about, that was liquefaction. Liquefaction is when you have very unstable soils with very high water content. And essentially they can become almost like a river, or worse.

And so they literally tore buildings apart. You know, you have no foundation if the earth itself- you’re not on bedrock. None of these buildings that people lived in there where the mass killings occurred because of liquefaction could be tied to bedrock. They’re deeply unstable soils. And essentially it’s as if the earth swallows you up in these circumstances. There’s nothing you can do once the quake hits.

So prevention, obviously, is the first thing, in terms of don’t locate in areas where there’s really high tsunami dangers and there’s really high liquefaction dangers. And that’s easy for rich people to avoid. It’s much harder for very poor people, because often the only cheap ground that you can find to put your home is in these areas. And indeed, one of the reasons they’re cheaper is because they’re more dangerous. The second thing is can your building survive? Now, again, nothing- as a practical matter, nothing was going to survive the liquefaction. You simply wouldn’t have enough money. And if you did, you wouldn’t tie to bedrock in that area. You would you know put your home in a more stable area.

So these are all levels that we have to think about in terms of these dangers. Some of these events that we’ve been talking about, like the hurricanes, of course, you can get advance warning. And that is a massive difference. Do you have enough money that you can afford to evacuate the area? Do you get the warning in time? Is there anywhere to evacuate to that really is truly safe? On an island like Puerto Rico there are far fewer such areas, of course, that you could evacuate to. You’d have to actually get off the island in many cases, which is effectively impossible for anybody who wasn’t fairly wealthy in those circumstances.

But the recent incredibly powerful Hurricane Michael is also a demonstration of how many people we can save in these circumstances. So Michael, had it occurred around 1900, might have killed tens of thousands of people. It moved so rapidly, it intensified in power so rapidly that it’s only modern communications that could get you warning in time to either evacuate or seek shelter. In the case of Indonesia, we had put in sensors to warn of tsunamis, and we had warning signals developed to warn against the tsunamis. But those sensors have not been maintained and they do not function anymore, because Indonesia, A, is a poor country, and B, it allocates its money in ways that are consistent with crony capitalism as opposed to the people. We still don’t know why some of the sirens didn’t go off; whether they areas were closed, whether they never got the communications, or the people who got the warnings fled. But we know some people were incredibly brave.An air traffic controller died at his station helping the plane land in these circumstances.

GREG WILPERT: Bill, what you’re talking about are measures that can be taken in terms of warning and in terms of evacuation. In other words, things that would happen normally shortly beforehand. I’m just wondering, to what extent might these disasters also be prevented from or kept from turning into poverty disasters if the communities themselves weren’t that poor in the first place? I mean, wouldn’t that have an impact, as well? In other words, what you’re suggesting, at least, in terms of building safer structures has something to do with the level of poverty. And in other words, won’t we always see poverty disasters as a result of natural disasters if the extreme inequality in the United States isn’t addressed as well?

BILL BLACK: Well, yes. And it’s not, of course, just the United States. The extreme inequality always shows up, as you say, in terms of structure. Structure design, and whether the rules are actually enforced.

So for example, Turkey has had a series of killer quakes in which sometimes people, many hundreds, die as buildings collapse. Modern buildings collapse right next to ancient structures that are unreinforced masonry. So what is going on? Well, part of it is the luck of particular soil conditions. But a large part of that is even though Turkey has excellent seismic codes for building taken from California, copied quite deliberately, they’re not enforced. Or at least they’re frequently not enforced. They were not enforced in China in Sichuan, when you saw school after school collapse.

And that’s it. The saying is that, you know, it’s not earthquakes that kill people. It’s buildings that kill people when they collapse. They pancake, and they are incredibly lethal in those circumstances. Again, China has good building codes, but people were being bribed not to enforce those codes and builders made more money not doing that. And again, that’s much harder to get away with in wealthy communities, and much easier to get away with in poor communities. In California we got extraordinarily lucky- this is back in the Great Depression- when a significant quake hit basically an hour and a half after the schools closed. And the estimates were that probably somewhere in the range of 6,000 kids would have been killed if the earthquake had occurred two hours earlier.

That- in the Great Depression, right, when funds were incredibly limited, under a conservative Republican governor, led to the adoption of the Field Act, which created special standards for schools, and a special team of inspectors who were trained in seismic risk to make sure that those codes were actually being followed. And since the adoption of the Field Act, which is now 80-plus years, not a single California kid or teacher has died from a seismic event in one of those Field Act buildings and such. So yes, we know how to dramatically reduce losses. And we also know, in the case of weather, that we are substantial contributors.

GREG WILPERT: We’re going to leave it there for now. I’m speaking to Bill Black, associate professor of economics and law at the University of Missouri Kansas City. Thanks again, Bill, for having joinined us today.