At Netroots Nation 2019, Vic Barrett, a young defendant in Juliana vs US, talks to Dharna Noor about why he's suing the federal government for its role in the climate crisis

At Netroots Nation 2019, Vic Barrett, a young defendant in Juliana vs US, talks to Dharna Noor about why he's suing the federal government for its role in the climate crisis 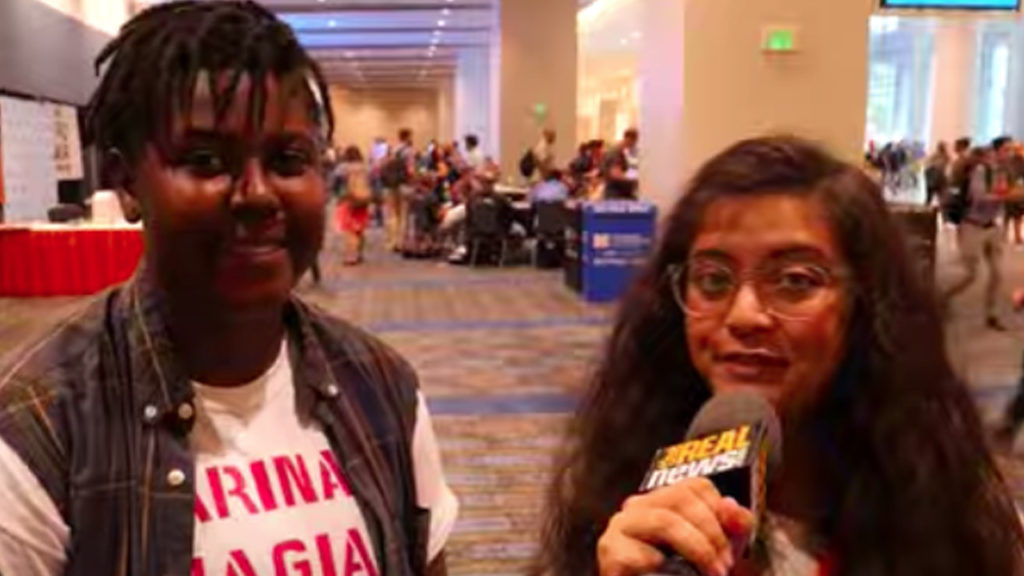 DHARNA NOOR: I am here at Netroots Nation 2019 in Philadelphia, and I’m here with Vic Barrett, who is one of the plaintiffs in Juliana v. United States, which is a lawsuit. These folks are essentially suing the Federal Government for refusing to take climate action and for fueling the climate crisis. Thanks for being here, Vic.

VIC BARRETT: Yeah, of course. Thanks for having me.

DHARNA NOOR: How old are you, and how did you become involved in the fight for climate justice?

VIC BARRETT: Yeah. I’m 20 years old, and I got involved in the climate justice movement when I was 14. I was doing afterschool programs with non-profits in New York City, Global Kids, and I was working with The Human Rights Activist Project. And working with The Human Right Activist Project, I learned a lot about the intersections of justice and climate change, and how that applies to my life and people who look like me, particularly in New York City with low-income housing and housing that’s predominately lived in by people of color, more frequently being put in the frontlines of climate change. And I just realized the injustice in that, and the injustice that so many people of color are facing coming from all directions. And I just felt like climate was the issue that I had to work on and dedicate my time to.

DHARNA NOOR: Tell me a little bit about Juliana v. United States. What exactly are you all alleging that the federal government has done, and what exactly do you want the outcome to be?

VIC BARRETT: Yeah. So Juliana v. United States is a lawsuit that’s being sponsored and facilitated by Our Children’s Trust, which is a nonprofit organization in Eugene, Oregon, that’s been working on atmospheric climate litigation to try to deal with the climate crisis for a while. So our lawsuit was filed in August of 2015, with 21 plaintiffs from all over the country that each have their own complaint, as part of a large declaration that gives a standing to sue the U.S. Federal Government. And basically, we’re asserting that the U.S. Federal Government has known since 1960 that climate change could be potentially disastrous. We have proof from administrations going back all the way to the Johnson administration, saying that they knew climate change could be an issue and they knew that fossil fuel infrastructure was causing it. And the U.S Federal Government still chose to take direct action to continue to perpetuate the fossil fuel industry and the U.S. fossil fuel economy that we have.

And we’re asserting that by taking that direct action, they’ve disproportionately put the rights of young people at risk, and the rights of life liberty and property as promised to us in the Constitution. And so, what we’re looking for our in our case is for the court system to mandate that the legislative system and the executive system have to work together in order to come up with a plan that would draw down carbon emissions to a point that’s sustainable for human life, and do what we can to bring the global temperature down to at least one and a half degrees Celsius.

DHARNA NOOR: And your lawsuit alleges that the climate crisis has taken a toll on specifically young people, not just because of the potential that people could actually die from climate crises, but also because of the sort of psychological toll and the developmental toll that that comes with, this crisis looming over you at all times. Could you talk a little bit about that, and why that’s an important part of the lawsuit?

VIC BARRETT: Yeah. So that’s something in our argument that our lawyers have invested a lot of time into. We have a lot of experts that have won Nobel Prizes and a lot of things. Particularly, we have an expert that is a psychologist. So she talked to some of the plaintiffs and kind of gave us psychological evaluations and then made conclusions based on how we responded, how we reacted, and made a lot of conclusions that shows that we’re all dealing with. Some of us are dealing with depression, dealing with having existential crisises because of climate change and because of the implications that it has on our life. And then we also have an expert, Catherine Smith, who is also an expert on the gay marriage case and made the argument that young gay people in this country–and also children of gay families-can be impacted by how the U.S. treats gay people.

She also wrote expert testimony on our case that basically is just like, “These kids are going to deal with developmental issues because of climate change and it’s going to deal with their growth. And for the younger plaintiffs especially, like Levi and Hazel and Avery, it’s going to be really hard for them growing up and being able to cope with the issue of climate change. And that could have a lot of detriments to their development into adulthood.

DHARNA NOOR: Levi, you mentioned, is only 11 years old, the youngest plaintiff on the case, right?

VIC BARRETT: Yeah. Levi is the youngest plaintiff on the case. He’s great. He’s a fiery kid from Satellite Beach, Florida, where he deals with a lot of sea level rise that really impacts his day-to-day because he’s an outdoor kid. He’s homeschooled, but he spends all his time outdoors being with nature and being in the water. And all that is at risk and all that’s really important to him.

DHARNA NOOR: It’s interesting. So often, as young people of color, I think we think about the ways that childhood is taken away from folks of color in the United States–especially black people, frankly. We think of Trayvon Martin being killed as a young person but treated as an adult, essentially, and as a threat. Could you talk a little bit about what it means to be a young person of color in this moment, with the climate crisis looming over you? I mean, I know that you’ve obviously sort of willingly given up so much of your time and so much of your childhood, frankly, because you’ve been putting so much work into this issue.

VIC BARRETT: Yeah, for sure. I think that there’s a lot of maturity that has to come into being a black person growing up in America that has to hit you really quickly in order to adjust to everything that’s going on. And I think specifically looking at climate change, a lot of what engaged me in getting into climate change was seeing the that also young black people are just being straight up killed in the street by the people who are meant to protect us, by the systems put in place that are meant to protect us. And instead, we’re actively killing us. And I think that when I learn more about climate change and I learn more about the implications it has on people’s lives. After that panel I just did, a woman came up to me and told me about how in the South Bronx, one of her sibling’s friends who is in the first grade died of an asthma attack on the playground. The Bronx has some of the highest asthma rates in the country. And it’s not like these people were asked to be born there, but they’re still being given a death sentence just because of who they are and the amount of disenfranchisement they have.

And I think that it’s really numbing in a lot of ways, honestly, but also really empowering. Because black people, for a long time, have been going through a lot of these issues, a lot of these pressure, just a lot of being pushed down by institutions. And at this point, it’s not that we’re used to it, but we know how to respond to it, we know what we have to do, and we know when we have to turn into our own community for that help. And I think with the climate crisis, what’s particularly like damning about it all, is that people of color, black people, have always been stewards of the earth, they’ve always been stewards of nature and have always taken care of the earth and what we have around us. And so, the fact that these systems, these white supremacist systems, have turned the earth against us is really what motivates me to keep doing the work and keep tapping into my ancestry and keep thinking about who I am and why I’m doing this.

DHARNA NOOR: Yeah. And of course, study after study shows that the people who have the smallest carbon footprints are the ones that suffer the most when these sort of crises hit. In this moment, obviously we’re about to see a really important presidential election, and there’s kids rising up all over. I mean, we’re here from Baltimore, where there is tons of youth climate activists in the streets all the time. There is The Sunrise Movement, there’s Zero Hour, there’s y’all. Talk about why it’s so important right now to listen to young people.

VIC BARRETT: Yeah. I think it’s really important right now to be listening to young people, because right now, young people have the most stake in this issue and the most urgency in their hearts when it comes to talking about this issue. And if you’re not listening to the people who feel the most like in their bones about what’s going to happen and what their future is going to look like, then you’re not listening to the right people. And I think that youth have proven time and time again that we know what we’re talking about, we know what we need to do to make change happen, and we’re going to keep doing that. We’re going to keep pushing for it, especially when it comes to our future and our ability to have that.

DHARNA NOOR: And my last question, is you–I guess–were not old enough to vote in the last presidential election, and this year you are. Talk about what a president could do to make climate justice a day one priority. Like what are maybe one or two or three things that you’d be looking for on the first day to really show that a candidate is committed to climate justice?

VIC BARRETT: Yeah. I would be looking for trying to cut ties between corporations and the functioning of our government, looking at corruption, looking at how the fossil fuel industry has weaseled its way into Congress and into Senate and into our policies and trying to dismantle that as best as they could. And also, commitment to investing in renewable energy infrastructure–and not just renewable energy businesses individually, but actually building a new energy system for the United States that works for everybody who lives in it.

DHARNA NOOR: All right. Thank you so much.