While Activists Mobilize for Lula, Right-wing Extremist is Inaugurated in Brazil

January 1st was the inauguration of Brazil's new right-wing extremist president Jair Bolsonaro. In his speech he promised to rid Brazil of socialism. Meanwhile, at a prison in Curitiba, thousands gathered in support of former Workers Party President Lula. Mike Fox reports from Brazil

January 1st was the inauguration of Brazil's new right-wing extremist president Jair Bolsonaro. In his speech he promised to rid Brazil of socialism. Meanwhile, at a prison in Curitiba, thousands gathered in support of former Workers Party President Lula. Mike Fox reports from Brazil 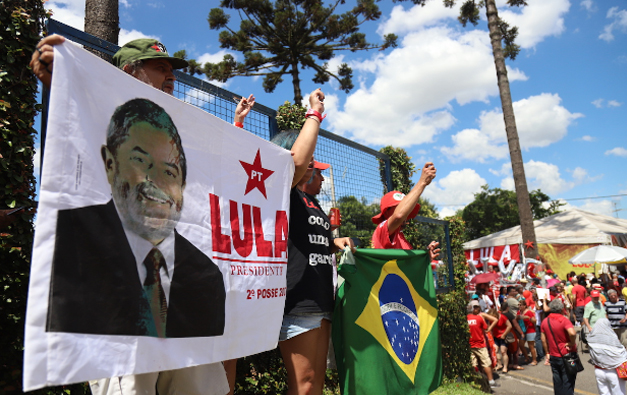 Though turnout was substantially lower the expected, he was still greeted by more than 100,000 supporters in the country’s capital Brasilia.

New tough rules, however, restricted journalist access to the ceremonies.

Bolsonaro ran on the promise of fighting corruption, crime and the left.

He reiterated this in his inaugural speech.

Bolsonaro brings with him the highest number of former military officials into a presidential cabinet, since the dictatorship.

He has promised to move swiftly to help put weapons in to peoples’ hands. He has praised torture and the dictatorship. And vowed to do away with activism. His controversial and aggressive rhetoric against minority groups has left many to fear that his government could unleash a wave of repression against the left and traditionally marginalized communities.

Political violence rose in the lead up to the election, mostly perpetrated by Bolsonaro supporters.

But these concerns did not stop Bolsonaro’s opponents from standing up on Day 1.

Thousands of progressive activists traveled to the Southern Brazilian city of Curitiba to commemorate the New Year. They rallied outside the prison where former president Luiz Inacio Lula da Silva has been held since April.

Lula led all of the polls heading into the elections. But he was barred from running by the country’s top electoral court, due to a controversial corruption conviction, which people here say was just a means of keeping him from returning to power.

Katia Garcia is a professor who traveled from Brasilia for the demonstrations.

Katia Garcia, Teacher: “We can’t forget that this is a coup that we have been confronting in Brazil. It’s been a coup d’etat since 2016 and we are resisting. They locked Lula up because they knew that without a doubt at 3pm today he would have been sworn in as president.”

Lula and his imprisonment remain a symbol for progressive forces in Brazil. A vigil has been ongoing since the former president was jailed 270 days ago.

Telma Mello, Real Estate Agent: “They need to free us. Because with Lula in jail, the people are in jail.”

As Bolsonaro took office in Brasilia, Lula’s supporters held their own ceremony in Curitiba calling for Lula’s freedom.

Those in attendance said they were there for more than just solidarity.

Cesar Pereira, Retired: “This is symbolic. It’s a day of resistance, so that this mob that has grabbed power know that it will not be easy. We will be fighting throughout the time that they are (un)governing the country.

It is still too early to tell if Bolsonaro will follow through on his promise to wipe away his political opponents. But the social movement and political activists here say they are taking their organizing into their communities and they’re ready for what may come.

Samuel Salmen, Librarian & Political Activist: “For me, the crisis will be clear within a few months. Hunger. Unemployment. People are going to be upset. And of course, the police and the army are going to repress, but you have to fight.”