Media reports and the Trump administration presented a very one-sided version of the election of Venezuela's National Assembly leadership, presenting it as a coup. But who is trying to overthrow whom?

Media reports and the Trump administration presented a very one-sided version of the election of Venezuela's National Assembly leadership, presenting it as a coup. But who is trying to overthrow whom? 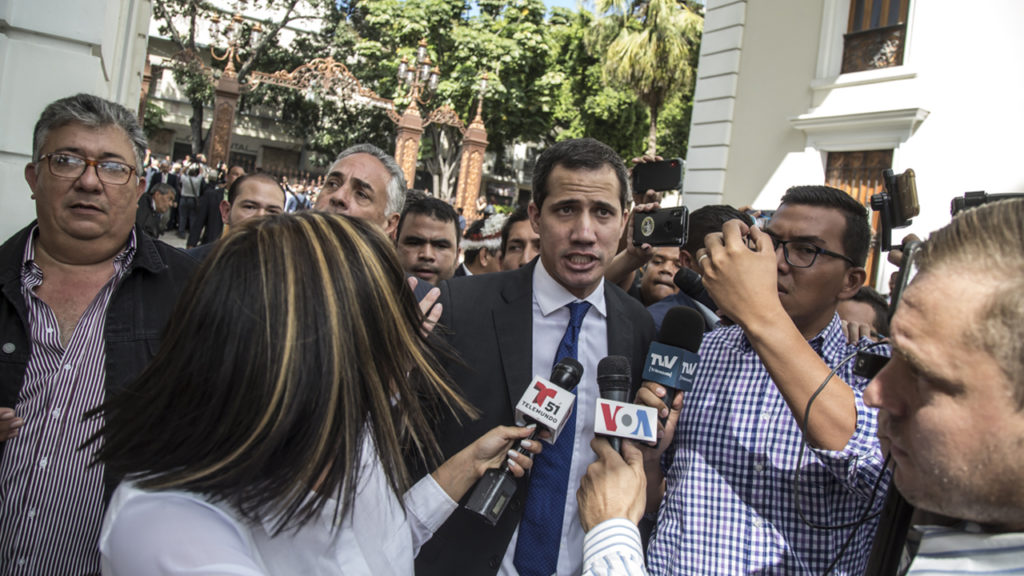 GREG WILPERT: Once again, media attention is on Venezuela. According to the reports, in early January the government of Venezuela’s President Nicolas Maduro maneuvered to close down the opposition’s last bastion of power, the National Assembly. Almost all stories say Venezuelan opposition leader Juan Guaidó, the country’s parallel self-declared president for the past year, was denied access to the National Assembly’s parliamentary leadership election. Guaidó’s position as president of the National Assembly helped legitimize his claim to the presidency, which would continue if he were reelected.

According to Venezuela’s far-right opposition and the Trump administration, Nicolas Maduro’s election in 2018 was fraudulent. They argue that Guaidó, as president of the National Assembly, is next in line for the presidency. Over 50 countries, mostly in Europe and in North and South America, have supported this claim. The rest recognize Maduro as Venezuela’s legitimate president. Media outlets showed footage of Guaidó trying to scale a fence that surrounds the National Assembly compound to support their claim that Guaidó was prevented from participating in the leadership vote. The footage shows National Guard troops preventing him from climbing the fence.

ELLIOTT ABRAMS: Yesterday, Juan Guaido was reelected president of Venezuela’s National Assembly with 100 votes – not only a clear majority of the 167-member legislature, but also, obviously, a quorum.  We congratulate him. As you recall, we have been warning about the Maduro dictatorship’s efforts to steal the vote through bribery, jailings, and intimidation.  More than 30 deputies are in hiding, in prison, or in exile. Others were bought.

And yet this brutal and corrupt campaign failed.  Obviously, if the regime had had the votes, it would not have ordered soldiers to keep elected deputies out of the National Assembly in shameful scenes you’ve probably all seen in videos.  Those actions have been condemned and rejected by countries all over the world.

GREG WILPERT: What is missing from the media and Abrams’ description of the footage is that before he tried to climb the fence, Guaidó argued with National Guard troops, and refused to enter unless eleven other representatives were allowed into the National Assembly with him. The representatives who were denied entrance had been disqualified from office by the country’s top courts for a variety of reasons related to corruption and electoral fraud.

In Guaidó’s absence, a faction of opposition legislators joined forces with the governing United Socialist Party of Venezuela to elect a new parliamentary leadership of opposiiton politicians. This new leadership had split from the Guaidó faction just a few weeks earlier. Meanwhile, Guaidó called a parallel meeting of mostly substitute National Assembly representatives, who voted to reelect him as president.

Even die-hard opposition journalists such as Patricia Poleo–who was involved in the 2002 coup against president Chavez–and Francisco Bautista declared their amazement and disagreement with Guaidó’s brazen maneuver.

PATRICIA POLEO: First, it’s true that Guaidó refused to enter. There are videos. In fact, I showed them in my program from today, a video, where he arrives at the door where all the representatives enter, and he comes with a representative whose parliamentary immunity has been lifted by the regime. He sees the list, which has those on it who are not allowed to enter, because they have their parliamentary immunity lifted. The guard says to Guaidó that he may enter, but that the other representative cannot enter. And Guaidó says, if he cannot enter, then I won’t enter either.

FRANCISCO BAUTISTA: It’s not true that no one wins. Because in the end the government reaches some of its goals. When Guaidó refuses to recognize the government and declares himself president, well, now anyone can self-declare as they feel like it. In this disaster the one who wins is the one who is the most reasonable. He comes to go inside, but then says, “If they can’t enter, then I won’t enter.” But hold on man, if you say that, you won’t get inside.

GREG WILPERT: One issue that western media outlets regularly ignore in their reporting on Venezuela is the extent to which Venezuela’s opposition is internally divided. This began with the May 2018 presidential elections that the hardline opposition decided to boycott. Western media regularly presents that election as fraudulent because several key opposition leaders were not allowed to participate, such as Leopoldo Lopez – who was in prison because of a conviction for inciting riots in 2014 – and Henrique Capriles – who was disqualified because of corruption allegations.

Left out of the usual narrative is the fact that the opposition candidate who did run, Henri Falcón, was one of Venezuela’s more popular politicians, usually polling at least as well as Capriles or Lopez, and who could have won, had the hardline opposition not boycotted the vote. Since then, the more moderate opposition in Venezuela has engaged in negotiations with the Maduro government. They have even reached agreements to form a new electoral authority and for a new National Assembly election in late 2020. The opposition is also fracturing under corruption allegations that opposition leaders have leveled against each other.

Last year, Guaido’s designated appointees embezzled $125,000 from the humanitarian aid program to Venezuela. Guaidó himself has associated with a Colombian paramilitary group, known as “Los Rastrojos.” In one of the most serious allegations, one of Guaidó’s appointees was instrumental in losing the Venezuelan-owned oil company Citgo to the Canadian mining company Crystallex, due to a conflict of interest. Opposition leaders have called Guaidó’s approach to overthrowing President Maduro reckless and ruinous, considering the impact of US sanctions.

While obscuring what’s really happening in Venezuela, the US sanctions regime continues to devastate the country, making an economic recovery almost impossible. Tens of thousands have lost their lives due to medicine and food shortages. Ironically, the latest victims of US sanctions are seven opposition politicians who tried to challenge Guaidó’s leadership of the National Assembly. On Monday, the US Department of the Treasury hit them with personalized sanctions.

The press release quoted Treasury Secretary Steve Mnuchin as saying: “Treasury has designated seven corrupt National Assembly officials who, at the bidding of Maduro, attempted to block the democratic process in Venezuela… These and other designated officials can have sanctions removed if they side with the people of Venezuela and Juan Guaidó as their legitimate leader.”

‘Expand the Ballot, Expand the Vote’ Fights for Detainees’ Rights