What Can Humanity Learn From The Great Law Of Peace 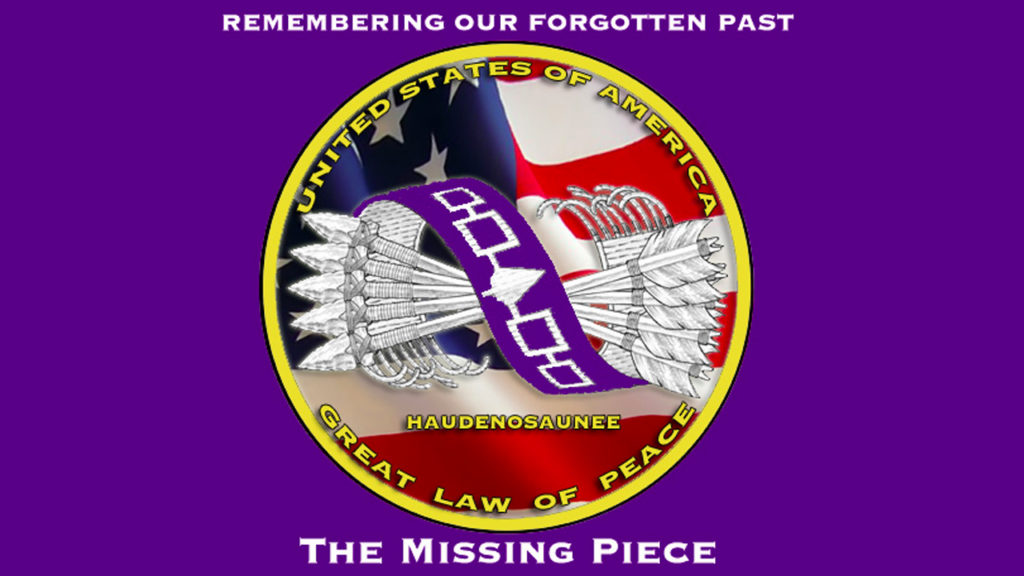 DIMITRI LASCARIS: This is Dimitri Lascaris reporting for The Real News Network from Montreal, Canada. This is Part 2 of our report on the Great Law of Peace.

The Great Law of Peace is the oral Constitution of the Iroquois Confederacy. The original five member nations ratified this Constitution near modern-day Victor, New York, with the sixth nation, the Tuscorora, being added in 1722. The laws were first recorded and transmitted not in writing, but by means of wampum symbols that conveyed their meaning. Later Great Law of Peace was translated into English, and various other accounts exist, as well. The law is called a Constitution, and is divided into 117 articles.

Back to discuss this with us Stuart Myiow, Wolf Clan Representative of the Mohawk Traditional Council, Kahnawake of the Five Nations Longhouse Confederacy. Stuart was born and raised on the Mohawk reserve of Kahnawake, just 15 minutes from downtown Montreal, where I am today. And he was raised exclusively within the ceremonial cycle of the traditional longhouse people. Thank you very much for joining us again, Stuart.

STUART MYIOW: Good to be with you.

DIMITRI LASCARIS: So, Stuart, in Part 1 you essentially argued that an enduring peace depends upon our respect for the creation story. And you referred to creation as being matrilineal rather than male dominated. I’d like you to start by elaborating by what you meant when you said that the creation story was matrilineal.

STUART MYIOW: Okay. I’ll begin like this. As you know, whenever we do something, we always do what’s called Ohen:ton Karihwatehkwen, meaning the Words That Come Before All Else. These are the things that we must speak in order to get our minds and our bodies into the right frame of thinking for the things that we are going to deliberate upon. And so the the opening always goes like this.

So we can see that there is a repetitive cycle here as to how things come into being. All things are born, whether or not we see them as having a mother. Sort of, like, say if we’re speaking of trees, or of rocks. We might not imagine that they have a mother, but all things are born of the same process, of how they come into being. And how they come into being is, if we break things down, you know, scientifically, on a microscopic level, everything cellular level expands. So cells divide, and so we can say that the first cell that divided to become two was female, was the mother to the the second two cells. And so all things in creation follow this pattern. And so we can find, then, a matrilineal pattern to all things in creation.

DIMITRI LASCARIS: Now, the Great Law of Peace, as I understand it, embodies the three principles of peace, power, and righteousness. How would you say, briefly, that the great law conceives of righteousness?

STUART MYIOW: OK. Well, righteousness would be any human being living their life in accordance with the environment with which we have grown out of. So that would mean, quite simply, anybody can then be righteous. We can be living in balance with the–if you live in the desert, you’ll be living in balance with the desert cycles. You know, whatever the cycles are. Monsoon season, or whatever else. You’re living within those cycles, you are living righteously, in accordance with the rest of creation, where we’re in a balance and we’re not harming that creation.

DIMITRI LASCARIS: So is it fair to say that righteousness is–central to the concept of righteousness under the Great Law of Peace is what we, and sort of modern Western society, would describe as sustainability?

STUART MYIOW: Yeah, pretty much so. You could also equate it to, like, as the way when the non-Native first came here, of course there was this older military and the religious. And the religious people recorded that they, of the Native people here, that we lived the closest thing to godliness that they have ever seen. So when you think that humans, living the way that their god would live, that would be very sustainable. There would be nothing that is not within a sustainable pattern or cycle.

DIMITRI LASCARIS: Now, in the first part of our discussion, you talked about the differences between sort of classic Western conceptions of democracy–we talked about in ancient Greece, whether that was truly what we understand democracy to be, or not to understand democracy to be. I understand that the Great Law of Peace embodies a principle that is very fundamental to democracy, amongst others, and that is that the leaders have to be truly accountable to the people. How does the Great Law of Peace ensure this accountability?

STUART MYIOW: OK. Well, as you mentioned in your opening, there is a Constitution, meaning, like you identified, there’s 117 onekorhas, or wampums, that cover all possible scenarios that could arise within creation. Now, you might, anybody might think that that’s a little farfetched. You know, 117 sections to a constitution that governs all things in creation? Well, when you know that all things in creation are governed after a pattern that we’ve already identified, one thing derived from another, then we can see easily that there is a law, or Constitution, that links all things together. So the Constitution of the Great Law of Peace guarantees that humans live the way that the creation lives. Where, for instance, if … A flower. If you put something over a flower, well, that flower is not going to grow into the thing that is over it. It is going to grow off to the side. There is going to be an immediate decision by the lifeforce to deal with the circumstances that it is confronted with.

And so the Constitution, the Great Law of Peace, deals with all possibilities of corruption or answerability of the leadership to the people, whereas the people have immediate process to correct their leadership through the laws, the Constitution. Can’t go into all of it right now. But there is these laws that every individual, not just selected people, but every individual in the nation has the right and authority to address their leadership in accordance with law. Not just to say that, oh, I think that you’re misrepresenting, or you’re doing something wrong. No. A person can only make such accusations or such claims if it is based, or if it can be substantiated, within law. And vice versa. Therefore, any representative, whether they be female chief or male chief, that they can only speak things that can be substantiated in law. If they cannot, if those things are not substantiated, then any person can break that person’s argument down, or your position. And if that can be done, then that position is not within law, is not within the best interests of the collective.

DIMITRI LASCARIS: And finally, Stuart, you know, today we live in an extraordinary time because of the crises or threats that we confront; rather unprecedented in human history. And I’m thinking particularly of both the presence of vast nuclear arsenals that could render the planet unlivable within a matter of days. And, of course, the climate crisis, which on a longer term also poses an existential threat, not only to our species but to countless others. Given the rather extraordinary threats confronting humanity today, what do you think are the principal lessons that we in the non-Native world ought to draw from the Great Law of Peace?

STUART MYIOW: OK. Well, it’s basically, where in the non-Native world, that democracy gives the individual, gives the individual rights over the collective. For instance, if an individual wishes to pursue some kind of economic venture. Well, every individual is given that right. It’s nurtured. When that person knowingly–let’s say someone like Donald Trump–takes their personal business to in such a way that affects the environment, then that takes away from everybody. So what is of the utmost importance in the Great Law of Peace is that it controls or contains the individual, where the individual cannot do anything that is harmful or damages the collective in any way. So this is something that the non-Native world does not have.

The non-Native world needs to bring their individual selves in line with the collective of creation. Where right now, as you know, like all the things that you said. Why do we have nuclear arsenals? Why do we have–why are we facing a deadline such as like what the United Nations put forward of the year 2030 in which we have to be reverse the destruction to our Mother Earth? Well, the reason why we are confronted with these things is because the individuals are given the right over the collective to pursue their personal happiness. And this is one of the main corruptions of so-called democracy, that again it gives individuals the authority over collective.

And as you see in the non-Native world, individuals such as, let’s say, Branson, Virgin Galactic, they take their personal business to a level that affects the entire world, where now, as you probably know, that they are taking their business venture into outer space, onto our Grandmother Moon, affecting our Grandmother Moon, which in turn is going to affect all of us. So an individual’s business practices can actually knock out of balance the entire world ecosystem. So this is of the utmost importance of what the non-Native world can learn from the Great Law of Peace, is how the individual must first make themselves a part. Of the collective. Not a collective of, say, a gang of this country or that country, or this religious belief or another. But the collective of creation, how to put ourselves in order and balance living in symbiosis with the creation which we grew out of.

DIMITRI LASCARIS: Well, we’ve been speaking to Stuart Myiow, Wolf Clan Representative of the Mohawk Traditional Council at Kahnawake. Thank you very much for coming back on The Real News, Stuart.

STUART MYIOW: Thank you very much. We’ll see you soon.