Every public school in the state is closed for a fourth day as thousands of teachers demand better pay, pensions, and healthcare. TRNN speaks to Dale Lee, president of the West Virginia Education Association, and union activist Lois Weiner

Every public school in the state is closed for a fourth day as thousands of teachers demand better pay, pensions, and healthcare. TRNN speaks to Dale Lee, president of the West Virginia Education Association, and union activist Lois Weiner 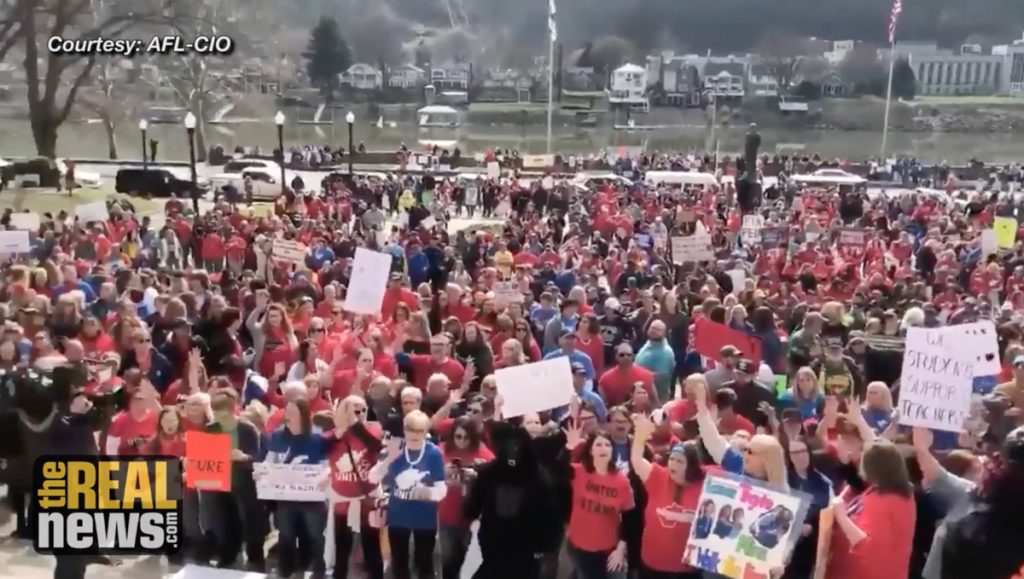 JAISAL NOOR: They chanted “55 Strong,” in reference to all 55 counties in West Virginia where teachers are on strike. For a fourth day, every public school in the state is closed as thousands of teachers protest on the steps of the state capital demanding better pay and benefits. Teacher Jake Fertig says he might have to declare bankruptcy because his income won’t cover rising medical premiums.

JAKE FERTIG: The issue has been for me that I qualify for food stamps, and a lot of our members do. And that was while working two jobs.

JAISAL NOOR: West Virginia teachers earn an average of $45,000 a year, well before the national average of $58,000. Unions say this number is 48 out of 50 states. The teachers went on strike after they were offered a 2% pay increase this year followed by a 1% increase over the next two years. Governor Jim Justice was heckled when he told teachers the state can’t afford anything more. He’s urging them to go back to the classroom. Some parents are worried if a deal isn’t struck soon, the state will lose its best teachers.

JAISAL NOOR: Teachers are demanding a face to face meeting with the governor but their request has yet to be granted. We spoke to Dale Lee, a 22 year high school special education teacher who’s on leave of absence to serve as president of the West Virginia Education Association. We reached him by phone at the capital.

So, I wanted to get you to respond to what the governor said the other day. He said the teachers should go back to school, they shouldn’t be on strike.

JAISAL NOOR: Before the strike began State Attorney General Patrick Morrisey said on Twitter, “The impending work stoppage is unlawful and should come to an end.” What’s your response to that?

DALE LEE: You know, we explained at the beginning that this was unlawful. The people also have the right to have their voices heard and we’re exercising that right. You look back in history, it was unlawful for what Martin Luther King did but they knew the consequences and knew the rewards and the rewards outweighed the consequences. So we know that it is unlawful, but we also know that we have a right to have our voices heard.

JAISAL NOOR: And talk about where the inspiration for this strike came from.

DALE LEE: Inspiration really came from the ground up. Our members have had enough. And we’re insulted with the proposed 1% pay raise and increases in our health insurance. When they started running bills that were taking money away from public education and taking away the seniority and then trying to silence their voice with a paycheck deception bill, they’d had enough and they said, “We’re ready to have our voices heard.”

JAISAL NOOR: We also spoke to Lois Weiner, director of urban education and teacher union policy project at the New Jersey City University. She wrote the recent piece, “West Virginia Teachers are Showing How Unions Can Win, Even if They Lose Janus.”

LOIS WEINER: One of the national implications for the strike is that Janus is loaning. And even if the unions squeak by on Janus and they get a ruling that doesn’t eliminate their capacity to collect money from members of the unit who are not union members for the services the union provides, even if they squeak by with that, I don’t think they will but even if they do, there remains the question of how are the unions gonna grow? How are they gonna survive, the union apparatus? How is it gonna survive if it loses revenues from members? And what the West Virginia job action, which was organized independent of the unions, I think that’s what’s very, very important, that these are working people.

These are working teachers and school employees who organized something that was across union lines. It’s not just AFC or NEDA. It’s not just teachers, they invited school employees as well, and they created a mass social movement to defend the dignity of their labor. That’s what it’s about. And that’s what unions should be about. They should be about becoming mass social movements to bring social justice to the job, to the workplace. And for teachers it’s also about professional ideals, about why we go into teaching and what we want to do for kids.

The fight for public employees on pensions is often, and healthcare, is often a statewide battle. And we haven’t seen the kind of statewide unified action in the continental United States that we’re seeing right now.

The other thing is West Virginia is portrayed, the Times just carried an article that portrayed it as a deep red state. And I think that that is a really dangerous, misleading oversimplification about the politics. And the walkout shows that. The walkout and the fact that West Virginia voted for Sanders in the primaries. And it was the Sanders campaign that really motivated and energized hundreds of teachers. Hundreds of teachers, including the leadership, the rank and file leadership of this movement.

And I think this has lessons and ramifications for the labor movement nationally and also for, obviously, for the state unions in West Virginia, that you cannot continue supporting the leadership of the Democratic party and relying on them to get you gains. It’s not gonna happen. We need direct action and we need to be telling these politicians what to do.

And so the question is how is labor going to respond to this? Are we going to respond to this simply by saying only that we want benefits to be paid by the employer? For public employees that means the government. Or are we going to fight for a social program where we expand social security and we expand Medicare? So I think this action really has very, very important implications and for everybody. Not just the South.

The last thing I want to say is that the discussion among West Virginia teachers about how they organize this for people who have collective bargaining is very important. There’s a discussion going on about, “Well, I can’t strike because if I strike I’ll lose my job.” And these people, they do not legally have, in West Virginia, they don’t have collective bargaining and they don’t have the right to strike. It’s a right to work state. But they organized it. And the question is how did they organize it and what are we going to learn from it.

GM Auto Workers Strike for Power and to Protect Workers