The Organization of American States allowed the ambassador of Venezuela's self-declared president to participate in his first meeting. The move could signal an attempt to take over Venezuela's embassy in DC, which activists are defending

The Organization of American States allowed the ambassador of Venezuela's self-declared president to participate in his first meeting. The move could signal an attempt to take over Venezuela's embassy in DC, which activists are defending 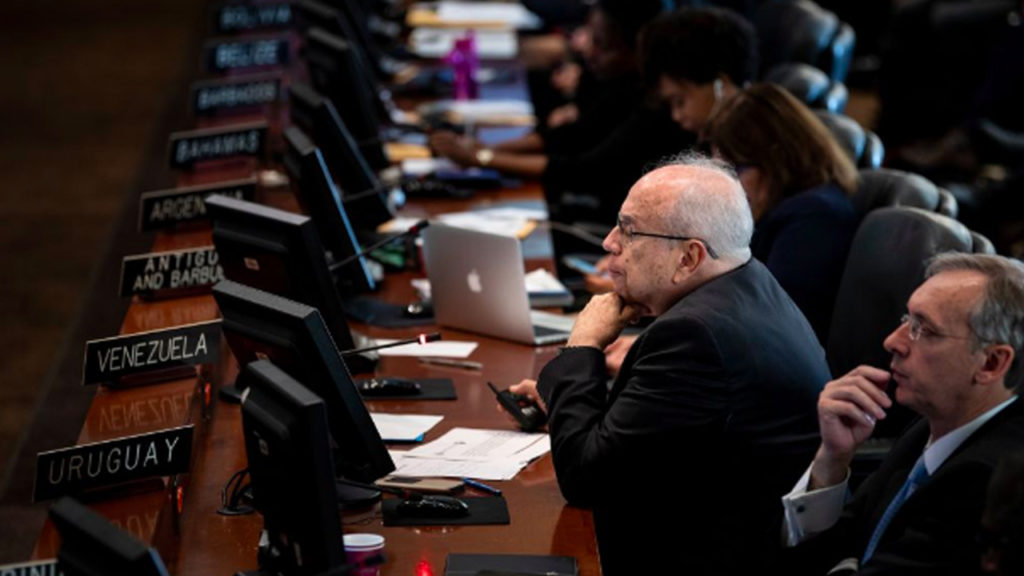 GREG WILPERT: There is reason to believe that the so-called interim and self-declared president of Venezuela, opposition leader Juan Guaidó, will attempt to take over Venezuela’s embassy in Washington DC very soon, with the help of the Trump administration. If this happens, the US government would be violating the Vienna Convention on Diplomatic Relations. On April 13th the US Secret Service already helped a Guaidó representative to take over the office of Venezuela’s military attaché in DC.
The takeover of diplomatic buildings and offices is taking place in the wake of an Organization of American States resolution of April 9th, in which – by a one-vote majority – the OAS permanent council decided to recognize Guaidó’s ambassador to the OAS. Guaidó’s representative, Gustavo Tarre, is now seated at OAS permanent council meetings. At his first council meeting on Tuesday he gave a presentation on Guaidó’s plans for Venezuela.
The meeting began, though, with a series of statements from OAS member countries that had opposed Tarre’s appointment. Here is what Bolivia’s ambassador had to say:
Bolivia’s Ambassador: Since there is no juridical nor precedent support for allowing a citizen to be designated by a national legislature of a member state, to place themselves as a permanent representative with full powers in the permanent council of the OAS, and to claim that the resolution would serve as a support for this is to violate diplomatic relations between independent states. This is a serious violation of international law.
Mexico’s Ambassador: Mexico reserves the right to question the validity of all acts and decisions that are derived from the cited decision, which come from the permanent council, including those that affect the rest of the organization.
Tarre later went on to outline a plan, as developed among opposition groups in Venezuela’s National Assembly, for how a Guaidó government would pursue an economic recovery plan for Venezuela. One of the main elements of the plan involved the procurement of multilateral loans:
Gustavo Tarre: Venezuela has been going through 20 years of systematic destruction. For a long time during these two decades high oil prices hid the disaster that was developing, and whose concretion became evident in the past few years. […] To put an end to the exchange crisis, to reactivate production, generate employment, and economic growth, Venezuela needs fresh money. The plan proposes: “With regard to fiscal matter, the humanitarian crisis, and the collapse of public services, these necessitate a significant expansion financed with external resources.”
Meanwhile, activists from the groups Code Pink and Popular Resistance have decided to protect Venezuela’s embassy in Washington DC from a likely opposition take-over. They are acting with the permission of the government of Venezuela. The activists have been spending nights at the embassy and sponsoring almost daily events on a wide variety of issues, discussing the role of the CIA, the situation in Central America, and reports on the situation in Venezuela. Also, they have hung banners and informational placards, alerting to the possible opposition take-over of the building.
According to the Vienna Convention on Diplomatic Relations, embassies are sovereign and inviolable territory of the country to which the embassy belongs. Even though 50 out of the world’s nearly 200 governments – mostly in Latin America and in Europe – have decided to recognize Juan Guaidó as Venezuela’s president, so far only Costa Rica has allowed the opposition to take over the Venezuelan embassy.