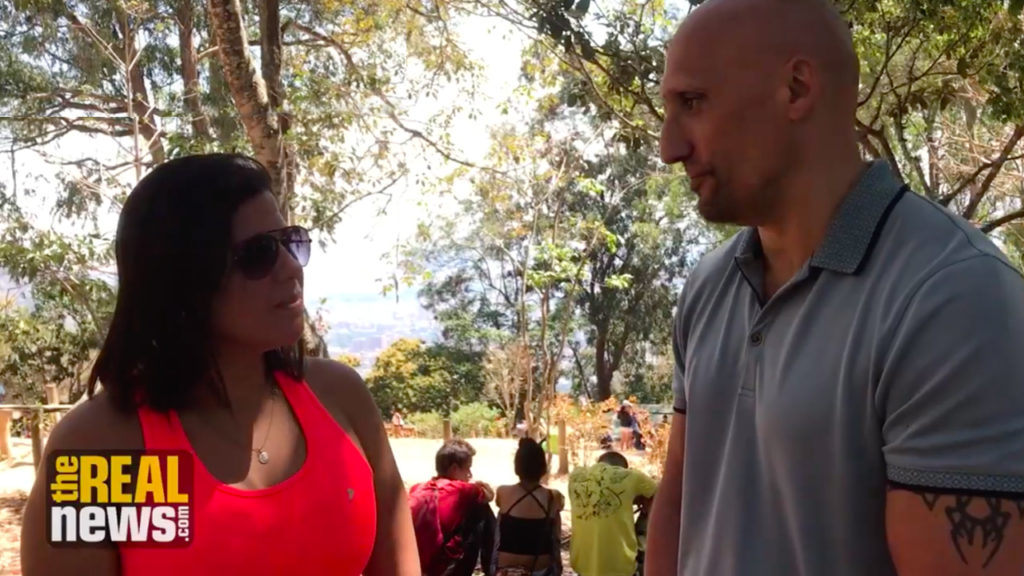 DIMITRI LASCARIS: This is Dimitri Lascaris, reporting for The Real News Network.

In early February, The Real News was in Caracas, Venezuela to examine the ongoing political and economic crisis there. Part of our examination of the crisis included speaking to Venezuelans gathered in Bolivar Square at the request of President Nicolas Maduro to sign a petition opposing Western intervention in the country’s internal affairs. As we expected, the people to whom we spoke in Bolivar Square were strongly supportive of the Maduro government, and of Maduro’s predecessor Hugo Chavez.

The Real News published our report from Bolivar Square on February 14, 2019. But The Real News also wanted to hear from Venezuelans who opposed the government of Nicolas Maduro. We therefore visited an affluent part of Caracas, near the business district of Altamira. Because the opposition to Nicolas Maduro derives largely from the more affluent segments of Venezuelan society, we expected the people who we interviewed there to be largely critical of Nicolas Maduro. For the most part, the people to whom we spoke were, in fact, critical of the Maduro government, but their views of Hugo Chavez were more favorable. Just as notable was their attitude toward Donald Trump. Although Trump enthusiastically supports the political opponents of Maduro, few of the Venezuelans who support the opposition seem convinced that Donald Trump is genuinely interested in the well-being of Venezuela’s people.

Here is what the Venezuelans we spoke to on that day had to say.

DIMITRI LASCARIS: In this crisis, Juan Guaido declared himself president of Venezuela even though he never won a presidential election. Do you consider him to be the legitimate president?

SABRINA: No, because of the way he proclaimed himself with a number of people from the capital, and from Miranda area, it is the same thing that Leopoldo Lopez tried. And it is not a democratic way.

But he is trying to bring a solution about for all those people who do not support the government’s project. But I don’t agree. I think we have to resolve our own problems.

DIMITRI LASCARIS: Do you consider him to be the legitimate president of Venezuela?

DIMITRI LASCARIS: Do you believe he is the legitimate president of Venezuela?

ANTONIO: At this moment, we love any person who stands up to Maduro. Because he’ll represent hope.

Now, we don’t really know if he is the guy. If right now, you go and declare that you’ll take Maduro down and deliver on it, you would be our hero.

DIMITRI LASCARIS: How do you feel about Hugo Chavez? Do you think he was a good president? A good leader?

MARIA VIRGINIA ESCALONA: No, because I believe in the leaders that strengthen the weaknesses of a population, instead of taking advantage of their weaknesses to hold on to power.

SABRINA: Well, he was a leader that listened to the population. He created a lot of popular housing developments. He supported the economy, technological resources, and food production.

Unfortunately, he is gone. And in his stead he left a team that is not delivering on his projects. His name is being used, but his projects are not supported.

ANTONIO: Hugo Chavez arrived in Venezuelan public life at an important time. When he took power in 1999, the country was in decadence, due to an array of old politicians and some workers unions.

And the vox populi was that we needed a military man who will control all these corrupted politicians and these unions. And at that point, Chavez’s figure enters the picture. He was one with the poor, because of his skin color and his original culture. And the people saw him as a saviour, just like they may regard Juan Guaido now.

[Chavez] started decaying, and continued surrounding himself with people who wouldn’t or couldn’t ensure the development of our country.

DIMITRI LASCARIS: What do you think is the best way out of this crisis? This political and economic crisis?

SABRINA, WORKER, PDVSA: I think it is a difficult situation, because we have an economic crisis and an economic war. Crisis because there was a project for us to increase cattle and agricultural production, so we won’t depend as much on our oil. And that is not being fulfilled. The companies they have tried to create have been damaged by corruption and ended up bankrupt.

And economic war because there has been chatter and even there are solid numbers to demonstrate that private companies, like the ones controlling food supplies, contribute to such war, and raise prices every week, when they are receiving preferential dollar exchange and can’t really justify such price hikes. So the population is suffering the oppression of both powers.

MARIA VIRGINIA ESCALONA, NURSE, PUBLIC HOSPITAL: Not an easy (solution). First our rulers must abandon their pride, abandon their cling to power. And to accept that we have a crisis, that is very important. To recognize the mistakes they have made over the last 20 years. To recognize there is a problem is the first step, which they don’t. And then once there is a recognition of a problem, then bring about a solution to it.

ANTONIO, MANAGER, MEDICAL IMAGE DEPARTMENT IN A POPULAR ZONE: If we analyze the situation, there are a lot of people who can’t gather enough money to get food. Like, for example, a kilogram of white cheese costs 20,000 Bolivares, and our minimum wage is 18,000 Bolivares.

Minimum wage is $6 (a month). Statistically speaking, worldwide, $1 an hour corresponds to countries in extreme poverty.

DIMITRI LASCARIS: Do you think that some of this is due to the United States sanctions?

ANTONIO: No. I think we are in a decadency, caused by our government’s bad policies. This government is inept. [He is] surrounded by inepts, people who know nothing about management.

When they had a time of abundance, they didn’t know how to generate confidence. The grave crisis we have now, it is caused by a lack of confidence.

DIMITRI LASCARIS: Do you believe that Donald Trump supports Mr. Guaido, and is motivated by concern for the welfare of Venezuela? Or do you think he has another agenda?

He does not want a communist regime, because they already had trouble with Cuba. And here we have oil reserves that his country needs. I think we are not part of Trump’s concerns.

MARIA VIRGINIA ESCALONA: Sincerely, our power struggle’s real name is oil. We can’t cover the sun with a finger. Trump has an interest in our country’s oil.

We have very good oil, and they want to keep buying it. U.S. is one of our main clients. They buy our oil because it is one of the best there is. So he wants to keep control over that oil. So I totally don’t agree with his proposals.

SABRINA: Donald Trump in favor of our people? No. He wants our resources like our oil, our gold, our water, and other riches we have. But no, he does not care about our people. He, just like Russia and China, they have big economic deals with our government. So that is what it is, economic interests, not our people.

This supporters and these allies don’t care about our people. I will never accept any warlike act, whether it comes from outside or from inside our country. History shows that these warlike acts always destroy the countries and the population, they then plunder the resources and leave.

So I’d rather this matter be settled internally, and that both sides get to an agreement.