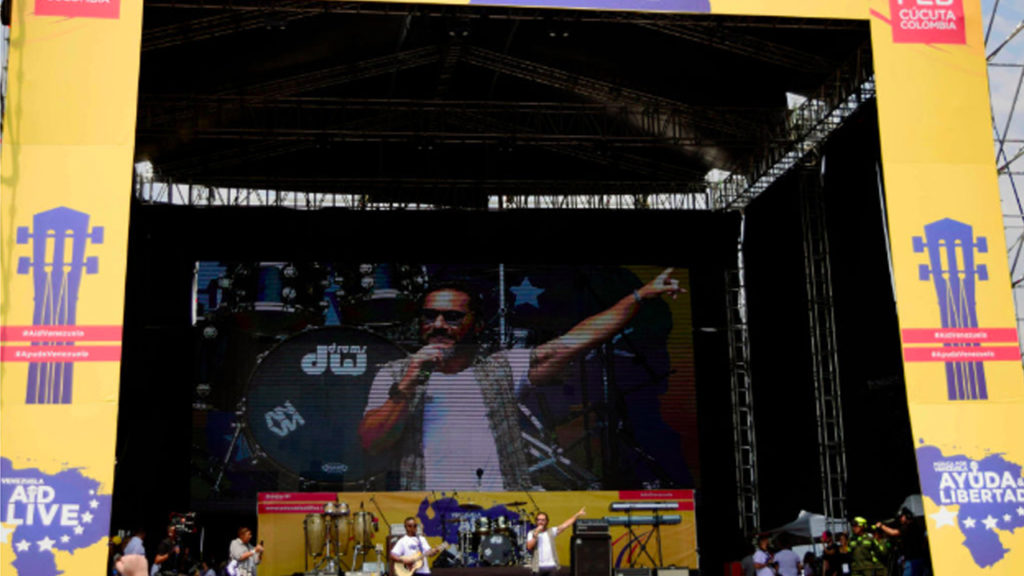 GREG WILPERT It’s The Real News Network and I’m Greg Wilpert in Baltimore. A scandal is brewing within the ranks of Venezuela’s opposition. This week, the online publication PanAm Post, which is usually quite opposed to Venezuela’s President Maduro, published an expose of corruption allegations within the ranks of opposition leader and self-declared President, Juan Guaido. According to the report, over $100,000 that were raised for humanitarian aid for Venezuela have been embezzled by Guaido’s associates. One of the main humanitarian aid fundraisers from which money was apparently embezzled was a large February 22nd concert organized by Virgin CEO Richard Branson on the Colombian border near the town of Cucuta.

Joining me now to discuss this scandal is Dan Cohen. Dan is an independent journalist and filmmaker who has reported extensively from Israel-Palestine, Latin America, and the US-Mexico border. He recently wrote an in-depth article about the scandal for the news site The Grayzone titled, From Coup Leaders to Con Artists: Juan Guaido’s Gang Exposed for Massive Humanitarian Aid Fraud. Thanks for joining us today, Dan.

DAN COHEN Good to be with you, Greg.

GREG WILPERT So let’s start with the main elements of what is known about what happened. Briefly, how much money was embezzled, where did it come from, and what was it spent on?

DAN COHEN Well, so far, we know that $125,000 was embezzled between February and May of this year by Juan Guaido’s operatives, his colleagues, in the Colombian border town of Cucuta. This money was actually supposed to be used largely for Venezuelan deserters, soldiers who had come to Colombia on promises and offers of not only amnesty, but also of money, a place to stay, health care, some of whom simply would be mercenaries. Instead of paying for the hotel rooms and everything that these soldiers— these deserters— were promised, these two figures basically stole the money and lived lavishly between Cucuta, a border town, and Bogota, the capital of Colombia, staying in fancy hotels, going out to five-star dinners, drinking, partying, and just, you know, living a lavish life.

GREG WILPERT Now, it seems that most of this was actually pretty well-documented in that PanAm Post article with the receipts and so on. Do we know who were the main people that were involved in this corruption scandal, and what has been the reaction from Guaido and his campaign to all of this?

DAN COHEN Yeah. The two figures are Rosanna Barrera and Kevin Rojas, who are both Popular Will Party members. This is the party that Guaido along with Leopoldo Lopez, the real opposition figure, founded back in 2009. Now, these two were placed in this coordinator position to oversee the delivery of so-called humanitarian aid. Kind of suddenly, they replaced two other figures who were there and it’s not really clear why Guaido made this order, but once they were in position, they basically took all of this money. It turns out that according to the PanAm Post article by Orlando Avendano, who as you explained is a pro- opposition journalist, Venezuelan journalist who is very much a supporter of Guaido, and basically explained himself as he just felt compelled to publish this because of such extreme corruption. But he found, according to Avendano, Guaido knew about this the whole time.

Colombian intelligence had basically been watching these two spend all of this money and alerted Humberto Berti, the Guaido envoy to Colombia, at which point he told Guaido and Guaido didn’t actually do anything. In fact, according to Avendano, Guaido actually tried to shift the blame onto his so-called basically fake embassy in Colombia. Only when this was revealed to the public by the PanAm article, that’s when Guaido finally said, you know, I’m against this and, you know, we must be transparent, and says he’s ordered an investigation. Now, as soon as he ordered that investigation, twenty minutes later, Berti says, well now the investigation is concluding. That shows that the investigation had been going on for some time and they had basically been hiding it in order to protect these people.

GREG WILPERT Now, the Branson concert was supposed to raise something like $100 million for humanitarian aid for Venezuelans. How did that concert actually pan out in the end? Has there been any accounting of this money on the part of Branson, and what about the other humanitarian aid? What do we know about that?

DAN COHEN Right. So this is the February 22nd concert that Richard Branson, the British billionaire and CEO of Virgin Records, organized in just a week’s time actually, as Juan Guaido was promising to deliver this humanitarian aid, the so-called humanitarian aid into Venezuela’s borders. Which, you know, as a—I was in Cucuta for that concert and for the following day when, you know, they attempted to ram this aid through. As a Colombian priest who is responsible for basically guiding these deserter soldiers told me, it wasn’t actually about humanitarian aid at all. It was a tiny amount and what it actually was meant to do was ram through the borders and show that Maduro has a loss of sovereignty, that he doesn’t actually control his own country, and that would foment an uprising, and finally depose Maduro. Now that’s failed spectacularly, but the day before this concert, which as you said, they said they would raise a $100 million.

Well, they said they, a few days later, they announced they raised only $2.5 million and they never said where that money was going, who it would be distributed to, or any kind of plan. I’m actually in a WhatsApp group with all these opposition journalists— this was the Venezuela Aid Live official WhatsApp group— and they had been asking, where’s this money going? And the coordinator said, you know, we’re going to make a statement and they never really made a statement. There’s major questions about where this money went and how much of it may have been spent by, you know, these same hucksters of Guaido in Cucuta. They did make a statement, the Venezuela Aid Live organizers did make a statement saying that they have nothing to do with the embezzled money, and they’re looking forward to the investigation as well, and that their money doesn’t have anything to do with it, but the $125,000— it may be much more than that. Avendano, the journalist who reported this stuff, has more receipts and more documents that I assume he’ll be continuing to expose.

GREG WILPERT Now, I just want to turn to Guaido himself. You’ve written about him as well, also for The Grayzone. What can you tell us about his background and how it came to be that he is the fresh face of the Venezuelan opposition now?

DAN COHEN Well, until Juan Guaido declared himself President of Venezuela in January of this year after receiving a phone call from Mike Pence urging him to do so, most Venezuelans had never actually heard of him. He was a middling figure in a, kind of, opposition party that had been discredited thoroughly throughout Venezuela for acts of street violence and leading what they call guarimbas, which are basically riots in the street that shut down certain areas of the city, and where they’ve actually murdered people who support the government. Guaido was basically catapulted into this position, but his history is really remarkable. Essentially, he was trained by a CIA cutout called CANVAS, which is the Center for Application of Nonviolent [Action and] Strategies, and this is a Serbian group that came out of Yugoslavia, the collapse of Yugoslavia, where the CIA basically poured huge amounts of money into student groups.

There was a group called Otpor! that was a key student group that led to the downfall of Milosevic. And then, this group basically became professional regime change trainers. So they’re going all around the world training student groups mostly to overthrow their governments. Basically, governments that the US doesn’t like. Certainly not governments the US is in line with— Saudi Arabia, Israel or anything like that. No, it’s only targets of the US empire. And so, Juan Guaido and many of his Popular Will Party colleagues attended these trainings. Guaido allegedly took part in what’s called the Mexican Fiesta Plot in a Mexican hotel in 2010 where he went to one of these trainings and they also plotted an assassination attempt of the President, Nicolas Maduro, which failed. But basically, Guaido has been a figure at the center of street violence for many years and he was vaulted into this position in order to basically have this US-backed scheme of a coup that has failed repeatedly since it was declared in January.

GREG WILPERT Okay. Well, we’re going to leave it there for now. I was speaking to Dan Cohen, independent journalist. Thanks again, Dan, for having joined us today.

DAN COHEN Thanks a lot.

Dan Cohen is a journalist and filmmaker. He has reported extensively from Israel-Palestine, Latin America and the U.S.-Mexico border. He filmed the documentary Killing Gaza.