The economic sanctions have severely affected Venezuela's ability to import life-saving medicines. At least one community, however, is responding by creating their own solidarity pharmacy. Michael Fox reports

The economic sanctions have severely affected Venezuela's ability to import life-saving medicines. At least one community, however, is responding by creating their own solidarity pharmacy. Michael Fox reports 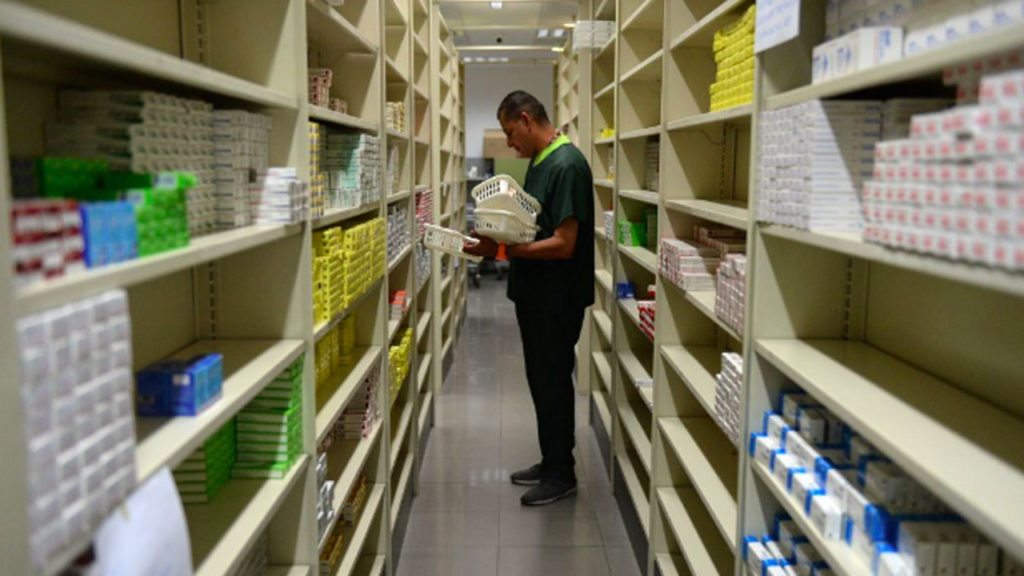 MIKE FOX: Venezuelans are facing a crisis in the health sector. Medicine is either nonexistent, hard to find, or far too expensive.
SPEAKER: Do you have anything for a 1 year, 3-month-old boy with a cold and a cough?
MIKE FOX: Joexy Torrealba has worked for pharmacies in Caracas for 3 years. She says previously Venezuelan industry manufactured basic medicines, helping to keep the cost down. But because of U.S. sanctions, local manufacturers can’t get the raw materials.
JOEXY TORREALBA, PHARMACIST: People with cancer practically just die, because they just can’t afford it. That medicine is really expensive. Someone making minimum wage will never be able to afford the medicine for treatment … People come here and you want to help them, but you can’t do anything.
RONALD ROSALE, PHARMACIST: This pharmacy was packed. It was packed full of medicine. Now see what it looks like? It’s empty.
MIKE FOX: According to Joexy, 40% of their product is impossible to acquire. What is there is far too expensive for your average Venezuelan to purchase on a regular salary.
ROSIRIS ZAPATEIRO, HEALTH COMMITTEE, ALTOS DE LIDICE: This is the collateral damage of everything that we are suffering. There have been cases where people die because of a lack of money, because they can’t afford the medicine.
MIKE FOX: The country’s political opposition blames the Maduro government for corruption and incompetence. But Rosiris Zapateiro and her neighbors in the Altos de Lidice comuna in Western Caracas say that while this may play a role, the real causes of the crisis are the big pharmaceutical companies, which are hoarding medicine and keeping the prices exorbitantly high, and the U.S. sanctions, which are blocking the import of essential meds and raw materials.
Roberto Bermudez is a Chilean doctor who has been working in the community for several years.
ROBERTO BERMUDEZ, DOCTOR, ALTOS DE LIDICE: The production of medicine in Venezuela doesn’t exist. They have the means to produce 70% of the medicine we need, but can’t get the raw material because it’s blocked … It’s the same thing with insulin. Eurobank blocked 40,000 doses of insulin, and a diabetes patient without insulin dies. So what do we do? We try to break the blockade in other ways.
MIKE FOX: Here, neighbors are developing their own answer to respond to the crisis: A neighborhood pharmacy.
Rosiris is a member of the comuna’s health committee, which launched the neighborhood pharmacy in May. They have received donations of medicine from individuals and international solidarity groups in numerous countries, including Australia, Brazil, Italy and, in particular, Chile.
Rosiris Zapateiro, Health Committee, Altos de Lidice
ROSIRIS ZAPATEIRO: The medicine comes from people that bring it to us from abroad. That is the real humanitarian aid, and they don’t ask for anything in return, because we don’t have anything to give.
MIKE FOX: The pharmacy is organized by the health committee and run through three Barrio Adentro health clinics in the neighborhood.
REINA DURAN, RESIDENT, ALTOS DE LIDICE COMUNA: My son had parasites and the doctor gave me the medicine for him because I had no way to pay for it.
MIKE FOX: Barrio Adentro clinics were set up around the country, under president Hugo Chavez, in order to meet the needs of the country’s poorest populations, many of whom had never before had access to health care. Today, despite the crisis, thousands of Cuban and Venezuelan doctors are still attending to the needs of millions of residents of the country’s barrios.
MARIAN BLANCO, VENEZUELAN DOCTOR, BARRIO ADENTRO: Yes, we don’t have many resources. We lack medicine, because of the economic and human blockade against us, but we have never denied medical attention and we never will.
MIKE FOX: The community pharmacy is a small response in one neighborhood amid the ongoing impact of the U.S. sanctions. The health committee is also teaching residents how to grow tiny gardens of medicinal plants in their homes.
But for many of those involved, the real way to begin to resolve the problem would be to lift the U.S. blockade and financial sanctions that prohibit Venezuelans from accessing urgently needed medicine.
ROBERTO BERMUDEZ: There is a mafia that is leaving us with less medicine for the people and the blockade is brutal, because they are using it as a weapon of war.