While Venezuela struggled with the most massive blackout in its history, president Maduro said there is evidence that a US cyber-attack caused the blackout. Meanwhile, Trump administration officials continue the offensive against Venezuela and the NYT uncovers false reporting

While Venezuela struggled with the most massive blackout in its history, president Maduro said there is evidence that a US cyber-attack caused the blackout. Meanwhile, Trump administration officials continue the offensive against Venezuela and the NYT uncovers false reporting 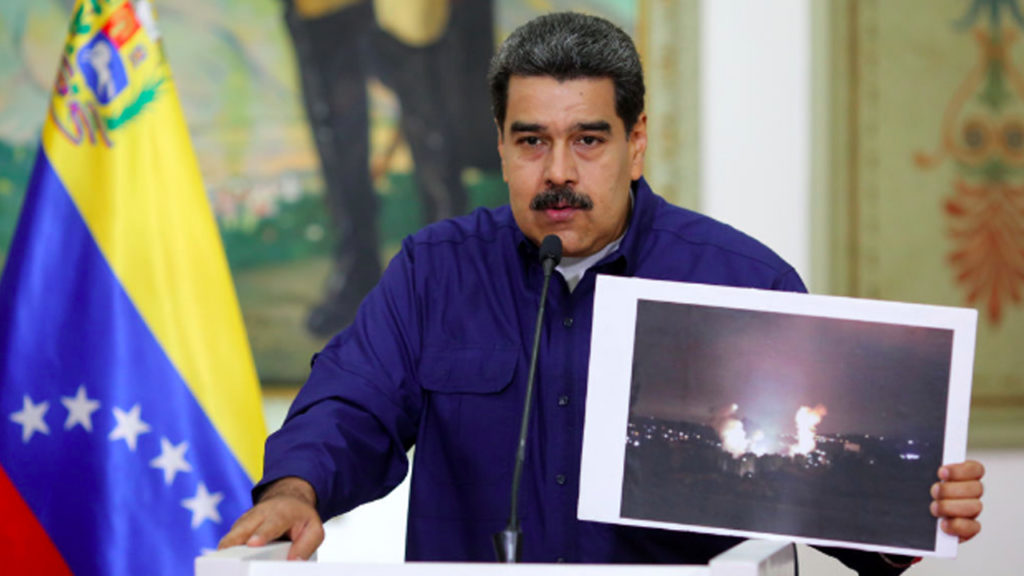 GREG WILPERT: Venezuela experienced its most extensive power outage in its history, beginning last Thursday around 5pm. The power outage affected about 70 percent of the country and initially lasted at least 20 hours in the capital of Caracas. Other parts of Venezuela, such as the states near Colombia’s border, Tachira and Merida, the power outage has continued for four days now. The main reason for the outage was that the Guri Dam, which generates about 80 percent of Venezuela’s electricity, went down. The exact reasons the dam’s generators went offline is not clear, but the government of President Maduro said it was the result of a cyberattack on the dam’s control systems. Monday evening President Maduro explained the attack as follows.

NICOLAS MADURO: This attack has been made through several ways. First, the cyberattack to the brain of the company, the brain of generation in Guri. In Macagua. And cyberattack from the outside to the brain that is located in Caracas, and transmits and distributes to the country. We have a generating brain that was attacked. The screens were blacked out. The conduction map was lost.

The third way—the first is cyberattack to the brain. The second is electromagnetic to the distribution transmissions systems. The third way, physical way, burning, explosions of different systems. Direct burning of substations.

GREG WILPERT: Communications minister Jorge Rodriguez argued that Florida Senator Marco Rubio knew a blackout was coming. He Tweeted a message about it only minutes after the blackout began, saying, “ALERT: Reports of a complete power outage all across #Venezuela at this moment. 18 of 23 states & the capital district are currently facing complete blackouts.”

U.S. Secretary of State Mike Pompeo replied to the Maduro government’s accusations with tweets of his own, stating, “The power outage and the devastation hurting ordinary Venezuelans is not because of the USA. It’s not because of Colombia. It’s not Ecuador or Brazil, Europe or anywhere else. Power shortages and starvation are the result of the Maduro regime’s incompetence.” He followed up with, “No food. No medicine. Now, no power. Next, no Maduro.”

Complicating efforts to re-establish power in all of Venezuela is that the electric company has suffered massive brain drain, with numerous highly specialized electrical engineers having left the country over the past year.

Also, as the New York Times noted, deep in one of its articles about the outage, “The sanctions have affected Venezuela’s ability to import and produce the fuel required by the thermal power plants that could have backed up the Guri plant once it failed.”

Supporters of the Maduro government took to the streets on Saturday, to protest against US interference in Venezuela.

An article in Forbes magazine observed that it is quite plausible that covert operations of the Trump administration could shut down Venezuela’s power grid. The article’s author, writes, “In the case of Venezuela, the idea of a government like the United States remotely interfering with its power grid is actually quite realistic. Remote cyber operations rarely require a significant ground presence, making them the ideal deniable influence operation. Given the U.S. government’s longstanding concern with Venezuela’s government, it is likely that the U.S. already maintains a deep presence within the country’s national infrastructure grid, making it relatively straightforward to interfere with grid operations.”

The author goes on to relativize his argument, though, saying, “On the other hand, outages are commonplace in Venezuela due to years of grid mismanagement. The country’s power grid does not need the help of the NSA to experience yet another shutdown. Indeed, last week’s outage was far more likely to have been just the natural result of poorly maintained generation and distribution equipment than to have been a targeted U.S. cyberattack.”

He concludes: “Yet, the inability to definitively discount U.S. or other foreign intervention, whether deliberate or accidental, demonstrates the incredible power of using cyberattacks to target utilities. Such outages can quickly turn a population against its government while making it almost impossible to definitively prove foreign intervention.”

This effort to undermine a government by non-conventional warfare, using the media, psychological operations, and cyberattacks, is often known as “fourth generation warfare.”

Another example of such warfare became visible this past weekend when the New York Times presented an investigation of how a US aid truck caught fire two weeks earlier, when Venezuelan opposition leader and self-proclaimed interim president Juan Guaidó attempted to bring aid into Venezuela from Colombia. One of the trucks caught fire and US government officials, Venezuelan opposition leaders, and practically all international media outlets said that it was Venezuelan soldiers who had started the fire on the truck. Vice President Mike Pence tweeted at the time, “The tyrant in Caracas danced as his henchmen murdered civilians & burned food & medicine heading to Venezuelans.”

However, the New York Times found that video evidence showed that opposition protesters caused the fire, perhaps accidentally, with Molotov cocktails that they were throwing at the military along the border control.

Evidence that this is what had happened actually surfaced immediately after the incident, particularly in pro-government news outlets, but major international media outlets chose to ignore it until the New York Times decided to report what actually happened, leaving the world with a completely false impression for a full two weeks after the incident.

Meanwhile, the Trump administration continues to place more pressure on Venezuela. Monday evening Secretary of State Mike Pompeo announced that all remaining US diplomatic personnel will be withdrawn from Venezuela because “the presence of U.S. diplomatic staff at the embassy has become a constraint on U.S. policy.”

The Trump administration’s special envoy, Elliot Abrams, told a US Senate subcommittee hearing last Thursday, “There will be more sanctions on financial institutions that are carrying out the orders of the Maduro regime.” Shortly after Abrams’ announcement, the US treasury department announced on Monday that the Russian bank Evrofinance Mosnarbank will be sanctioned for helping Venezuela evade US sanctions. This signals an important escalation in the application of US sanctions against Venezuela, far beyond its involvement in the US banking system.

Finally, when Trump released his 2020 budget proposal on Monday, the State Department specified what it plans to do with a portion of that money. According to the State Department website, the funds would go towards, “Supporting Transition in Venezuela: Continuing democracy assistance for Venezuela and including flexibility to provide additional funds to support a democratic transition or respond to the crisis there, including authority to transfer up to $500 million between foreign assistance accounts.”