About 2,000 grassroots communes maintain direct and participatory democracy in the face of the country's economic crisis. This report was filmed before the COVID-19 pandemic began to affect everyday life in Venezuela.

About 2,000 grassroots communes maintain direct and participatory democracy in the face of the country's economic crisis. This report was filmed before the COVID-19 pandemic began to affect everyday life in Venezuela. 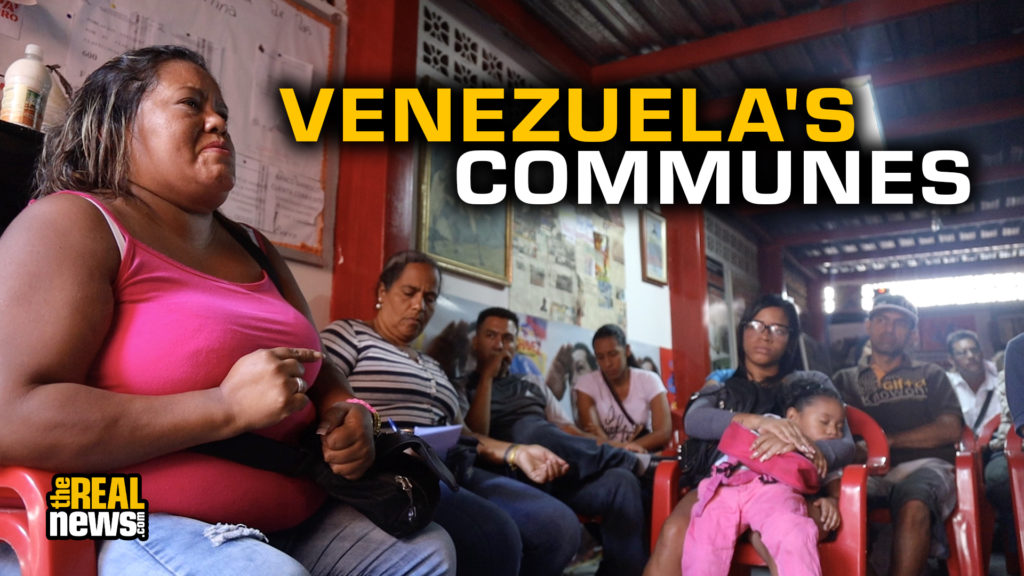 High on the edge of the barrios of Western Caracas, up on the hillside of the Waraira Repano mountain, members of this local commune are clearing land to begin planting corn.
Once it’s ready to harvest, they want to grind the corn into flour for arepas. That’s a staple in the Venezuelan diet. But because of inflation and financial crisis, most Venezuelans have had to do without corn flour and arepas. It’s just too expensive.
Gsus Garcias, Altos de Lidice commune
“Today we are beginning our work for our plan for communal planting. A plan that we developed to strengthen our local productions and to help us achieve self-sustainability. It’s also a way to fight against the U.S. blockade and defend what is ours and produce the food that we need, which we believe is vital for any commune and for the country.”
Jesus is a member of the Altos de Lidice commune, which is composed of roughly seven communal councils and 2,000 residents in the Caracas barrio of La Pastora. There are few signs here that distinguish this commune from any other stretch of barrio in Western Caracas. But the residents know. The commune is important. Spokespeople meet weekly or biweekly. It’s participatory and direct democracy at work. The government of Hugo Chavez began to encourage communities to organize communal councils in 2006 as a means of empowering residents to address the local concerns in their neighborhoods. Communes began to be formed a few years later, as larger territorial groupings of numerous communal councils. It’s all meant to complement the country’s representative democracy.
Down the hill, members of the commune’s local sport’s committee are hard at work.
Victor Bello
“We didn’t have room for a court in the neighborhood, but we are making one in the street, and painting it to have our communal basketball tournament.”
Jofran Pellegrino, Altos de Lidice commune
“The community is out. Everyone is focused on the quality of the court, for the good of our community and the kids. And everyone, from the smallest to the oldest children, are helping out with the painting.”
Down the street, members of the commune’s health working group are discussing their self-managed pharmacy.
Rosiris Zapateiro, Health Committee, Altos de Lidice commune
“We cover the need with medicine that we receive from donations from other countries, which we welcome with an open heart, because it’s the only way to fight the crisis and cover the medical needs in our community.”
They meet in a neighborhood home or in one of the neighborhood’s Barrio Adentro health clinics, where they coordinate with the local community doctor.
This is just one commune, in one of Caracas’ poor barrios that has been organizing from below.
While the news is obsessed with Maduro and Guaido, it completely ignores the grassroots organizing at the heart of the Bolivarian process that continues to happen around the clock in the communes of poor barrios around the country.
Atanea Jimenez, National Network of Commune Members
“There are approximately 2,000 communes in Venezuela. They are very important, because they are the government of the residents of the locale. It’s the people, the neighbors, governing over things that are very concrete, like water, transportation, services, health, education. And they are the residents of the locale deciding their destiny in citizen assemblies.”

Across town, in the barrio of Antimano, the local commune has created a project to begin a transportation service to help residents get to their homes high up in the barrio. With the U.S. blockade, financial crisis, and hyperinflation, transportation costs have risen, as replacement car parts have grown scarce and expensive.

Merwin Marinez, Frente Comando de Transporte Carapita La Yaguara
“Before we had public transportation up here, but because of the blockade, many of the cars are broken and that’s the situation we are trying to resolve.”
The government has found some funds and it’s providing the community with vehicles to run their neighborhood transportation service at discounted rates. If it works, it’ll be a win-win. Community members get much-needed transportation. The funds collected go to their neighbors who are running the service. They have one year down before they have to start paying off the vehicles. They are meeting to finalize the details.
Like this, most communes have a tight relationship with the government. They receive the government-issued subsidized boxes of food known as CLAP and distribute them to the community. The boxes are a lifeline for may poor Venezuelan families amid hyperinflation and out-of-control food prices.
The communes are also the link between the social missions, such as Barrio Adentro, and the local community.
But they are not free from criticism.
Gsus Garcias, Altos de Lidice commune
“The state has a ton of problems. We are not going to pretend they don’t exist. We are very self-critical of the revolution, because we want the revolution to be real, but we also know that there are complex realities, like the evil role of the United States in deepening our crisis.”
Some of the communes are also building connections, supporting each others’ work, andcreating networks of communes.
The rural El Maizal commune in Lara state provided the local produce to be sold here through this cooperative in San Augustin at low-cost.
Atanea Jimenez, National Network of Commune Members
“The people in these territories have seen the importance of resolving their problems together. Realizing that we have the answers to our own problems has been the key to consolidating the communes and the developing and growing new ones.”
Michael Fox, The Real News, Caracas, Venezuela.