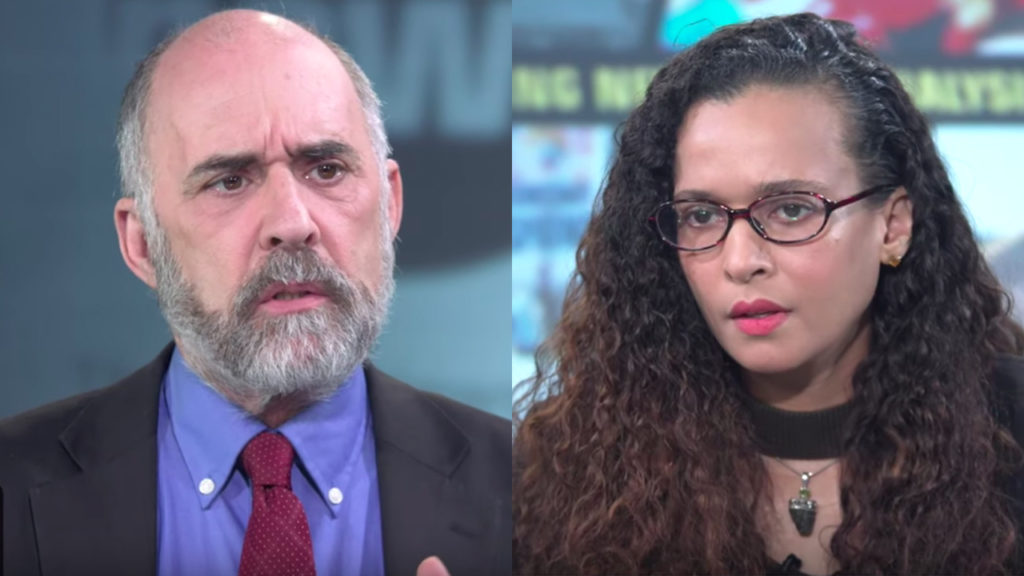 TAYA GRAHAM: Hello. My name is Taya Graham. And thank you for joining me at The Real News Network.

Today I’m speaking with Real News Senior Editor Paul Jay for a segment we do where we respond to your feedback. It’s a chance for our viewers to weigh in on a variety of topics, but also question us on the process itself, meaning how we approach reporting on the complex stories throughout the world every day. We put together a list of reader comments directly from our stories, and we’ve compiled a few questions that you’ve submitted directly to us. Just remember that if you have a question you want us to address, please send them to [email protected], or comment below on the story. And we may go live on occasion, so be sure to join us then for real time responses.

PAUL JAY: Well, this is, first of all, a very complex question.

TAYA GRAHAM: Yes. I’m not taking it easy on you.

PAUL JAY: And as I’ve done in the other segments, let me just say that I’m giving you my personal opinion. It’s not like a Real–not like we had The Real News all sit down and decided, you know, what we think about this. On the other hand, I’m the senior editor, or editor-in-chief. And so people should know what I think about these things.

So it’s kind of two questions in one, there. What does Venezuela have to do with telling us what’s possible in the United States or Canada? Then the other question is how do you judge the crisis in Venezuela in terms of the external pressures, meaning the sanctions, the drop in the price of oil, and mainly the sanctions right now and their own policy, and whether socialism worked or didn’t work in Venezuela.

So let me take up sort of that question, because I did a piece already on what does Venezuela tell us about socialism in the United States. And the answer is I don’t think all that much, because it’s such a different economy. It’s a small country. It’s almost entirely based on oil. It doesn’t have big, developed industry. It doesn’t have a big working class that’s unionized; it certainly has unions and has a working class. But so much of the economy is the oil. It’s not comparable to this American economy.

So what’s possible in Venezuela and what’s possible here, I think, are quite different situations at this time. There’s things one can learn, what happened in Venezuela. But it’s hard to make a direct comparison. Which is what, of course, Trump is trying to do.

PAUL JAY: Yeah. I mean, to say you can’t have–first of all, now we kind of are getting into it, but that’s OK. You know, what Bernie Sanders and AOC, and Warren, and some of, a lot of the other progressive candidates are proposing, isn’t really socialism. You can say it–the policies develop the socialistic features of the economy. The politics. Like Medicare for All. I’ve been told it’s like nationalizing almost 1/16 of the economy, because you nationalize private insurance companies, is what it amounts to, and you get rid of them, and you make it a public insurance plan.

So that develops the socialistic features that are kind of spontaneously, in many ways, growing within the economy. And sometimes the result of policy. It could be a public school system. It could be the post office. It could be a publicly-owned dam. It could be publicly owned highways. I mean, all of these things are social solutions to issues. And the more the economy develops, the more sophisticated it gets, meaning like over the 20th century, and into this one, the more and more it makes sense to have social solutions to things. And it happens even within capitalism.

PAUL JAY: It socializes the issue of medicine and healthcare. But the most important thing is, one, it doesn’t change, in very important sectors of the economy, who owns it, like banking. If you still have private banking, and the biggest of the industries are still mostly privatized, even if you have Medicare for All, you still have fundamentally a capitalist country.

So all the modern industrialized countries are mixed economies. But they’re primarily privately owned with some social ownership. And what Sanders and AOC, and others that are promoting these policies, are promoting somewhat more social solutions. I actually think there should be a lot more talk about developing the public sector in the United States, like, starting with banking.

But all that being said, it doesn’t change who has power. What class has power. And you can’t have this conversation outside of beginning with, as Sanders says, it is an oligarchy. There’s a billionaire class. But he doesn’t talk about how do you actually shift power from the billionaire class. You know, when I interviewed him, and I directly asked him about this, I said, don’t you have to develop a public sector that’s powerful to actually start weakening the power of the oligarchy? And he said yeah, banking was the–you know public banking was the example.

So this is kind of the American side of the equation. That’s why I say it’s hard to draw direct parallels from Venezuela.

TAYA GRAHAM: I think some of our viewers would say that–the ones that find socialism problematic–that you’re actually proving their point; that a socialized program like, for example, in Venezuela, what they did with their oil reserves–don’t they have the second largest oil reserves in the world? And yet it seems as if their country is crumbling down around their ears, and that their oil reserves are doing them no good right now. So couldn’t you make the argument that elites are going to be in control, have this power, whether there is a socialist face on it or a capitalist face on it? That this is, you know, a useless argument? That socialism can’t actually exist when elitism and classism actually overrides it?

PAUL JAY: Again, these are very complicated questions. They’re good questions, because it’s what people are asking about. It’s not a simple answer. First of all, the oil sector in Venezuela was nationalized before Chavez came to power. So the idea of having a publicly owned oil sector, at least a lot of it was nationalized prior to Chavez. But you know, Norway has a publicly owned-

TAYA GRAHAM: Finland has one.

PAUL JAY: Saudi Arabia is publicly owned. Canada used to have PetroCanada, and then they privatized it. But many of the countries that have oil have national, government, public owned oil. And it’s kind of crazy Canada doesn’t. In fact, one of the few of the oil countries that doesn’t have a publicly owned oil sector. But again, if power doesn’t shift, just having that public sector ownership of the oil, it may be a kind of socialistic–see, here’s the bottom line. Socialism-

PAUL JAY: Not quite. Socialism, the way I see it, and as sort of the classical view, like Marx and Engels, and others, socialism isn’t some theory. Oh, let’s now have socialism. And so somehow either you have a revolution, or you elect somebody, and oh, now we’re gonna have socialism. It’s not how socialism develops. Socialism develops within the womb of capitalism. It happens spontaneously. Because it just makes sense when the economy itself is so socialized. So what does that mean?

Well, you don’t have, like, one person making shoes anymore. And then they go and barter their shoes. The economy is so interwoven, so intertwined, that–like, you make a car. One factory is making the car. The floor plate. And somebody else is making lights. And another factory is making steering wheels. And then they assemble it here, or they assemble some in Mexico. And now that’s a global supply chain. You have pieces of it being created all over the globe. And some of these factories have thousands and thousands of people working in them. Although, as robotics develops, that’s becoming somewhat a different question. It’s not as big as it was.

But the point is the whole of society is involved in production. It’s extremely social. But ownership is archaic. The form of ownership goes back to the kinds of ownership–a form of ownership that was developed even in slave society; individuals owning all this mass of social production. And they’re at odds with each other, because the society as a whole is producing–how much of the technological advances came out of publicly owned universities? Most of them. The transportation system, publicly financed. But who profits of all this social production? A tiny little percentile at the top. What is it, like, three, four families now own, like, what is it, 50 percent of the wealth of the world? I mean, I can’t remember the exact–Bernie Sanders is better remembering these numbers than I am, and he’s 70-something, so what does that tell you about me? Anyway.

The issue here is socialism develops spontaneously. And people become conscious that social solutions just makes sense. And people develop that. Now, the people that own, the ownership class, they don’t like this, because it starts to threaten. Well, if it makes sense in healthcare to have Medicare for All, and a government insurance plan, maybe it makes sense in auto insurance. And in fact, in Canada, we now–and British Columbia, I think Quebec–have publicly owned auto insurance. Oh, hey, if it works in insurance, and it works in healthcare delivery, and the numbers prove that it does, well, how about when the automobile industry was in crisis, instead of bailing them out, why not nationalize one of them? Because they would have gone bankrupt without the public money. Why not buy one of them? How about banking? Why do we have to be dependent on these privately owned banks that speculate all the time? Why not nationalize them?

So as I say, the Venezuela piece of this story we should do, maybe do as a separate segment. Because the issue of socialism in countries like the United States and Canada is that these policies, like the Sanders, AOC, these kinds of reforms, they move in that direction. But we need to have a conversation about changing who owns the commanding heights of the economy, starting with banking. Because there’s no real conversation of democracy if you don’t change the political power that comes from concentrated ownership.

TAYA GRAHAM: OK. Paul, we’re going to have to pick this up later. But believe me, we’re going to follow up on this conversation. I want to thank you for joining me. If you haven’t already subscribed to our YouTube channel, what are you waiting for? Please do it. And also subscribe to our email list. You can get Real News delivered right to your inbox. Thanks for joining me.