US Unemployment Rate Hits 50-Year Low: What Does the Number Reveal and Conceal?

September's unemployment rate dropped to a 50-year low, but what is behind this statistic, how does it affect ordinary citizens, and can Trump take credit for the drop? We discuss these questions with PERI's Gerald Epstein

September's unemployment rate dropped to a 50-year low, but what is behind this statistic, how does it affect ordinary citizens, and can Trump take credit for the drop? We discuss these questions with PERI's Gerald Epstein 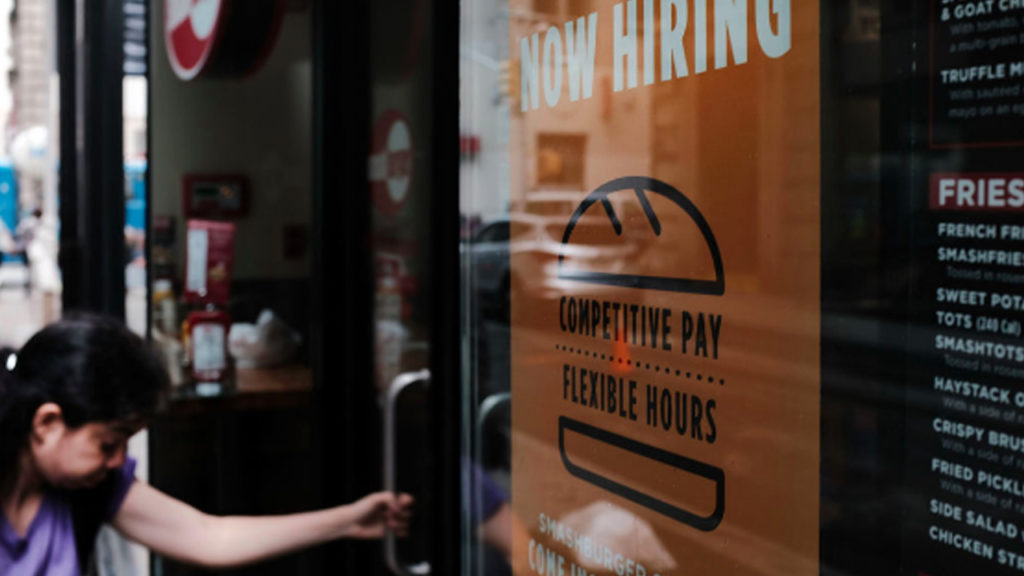 The official unemployment rate has reached an almost historic low of 3.7 percent, a rate not seen since 1969 almost 50 years ago. This is according to the September unemployment report that the Bureau of Labor Statistics released last week. President Trump, of course, repeatedly says he deserves credit for this new low unemployment rate. But is this number, which Trump regularly questioned when he was running for president, accurate? What does it reveal and what does it hide?

Joining me to discuss these questions is Gerald Epstein. He’s co-director of The Political Economy Research Institute and professor of economics at UMass Amherst. Thanks for joining us again, Jerry.

GREG WILPERT: So let’s take a closer look at this rate. The economy added only 134,000 jobs in September, according to the report, which is barely above the 120,000 that are estimated the economy needs in order to keep up with population growth. So why did the unemployment rate drop when the economy barely added any new jobs above population growth?

GREG WILPERT: Yes, speaking of the labor force, the percentage of working-age population that is working or looking for work, which is known as the labor force participation rate, is currently, according to those statistics, 62.7 percent, which is the lowest rate since the 1980s. Before the Great Recession it was 66 percent. So it seems to have been declining, which perhaps as you suggest, could explain for some of the drop in the unemployment rate. But what is going on? Why are fewer people participating in the labor force now than they were 10 years ago?

GERALD EPSTEIN: Well, this is a very important point and it partly has to do, I think, with the fact that jobs don’t pay very well. And so, there are a lot of people who can’t get high-paying jobs, so they search longer, they decide to go back to school. We also have a lot of people who are in prisons, and they work in prisons, but they don’t get counted. And I think there’s still quite a few discouraged workers out there who just aren’t looking anymore because they can’t find jobs that pay a decent wage and that use their training. So I think a lot of this helps to explain why the labor force participation rate is still stuck at relatively low levels.

GREG WILPERT: So another factor, I guess to take into account, is underemployment. I mean, those numbers, they’re not very clear, at least from what I was looking at. But what is your impression, what does the quality of work look like in the United States at the moment?

GERALD EPSTEIN: Well, yes. Underemployment is a very important factor as well. When unemployment is calculated, the labor force is calculated as anybody who either has a job, even if it’s part time, even if they only work one hour a week, and of course, there are a lot of people who want to work more hours. And normally, when the job market is very slack, they can’t work enough hours. So underemployment was quite strong during the recession and the years that followed because people couldn’t get full-time jobs.

Now what people are finding is that wages are so low that many people have to get multiple jobs just to make ends meet. So jobs aren’t so scarce, what’s scarce is jobs that pay a decent wage, that have benefits, that have a career ladder associated with them. And most of the jobs that are being created now still are low-paying jobs without benefits, without hope in the future, without a career ladder. And so the quality of the jobs being created, for the most part, is really dismal. And it’s improved since the Great Crash, but it’s still not back up to what it was in the 60s or even in the 70s.

GREG WILPERT: So yes, that actually brings me to the next point, which is that generally is assumed among economists that as an economy approaches full employment, wages should go up because there are more employers competing for fewer available workers. However, wages, according to the latest statistics, have hardly increased. The latest report says that wage increases this year are barely above the inflation rate, at 2.8 percent, while inflation is at 2.7 percent. What is going on here? Why isn’t lower unemployment leading to faster wage increases?

GERALD EPSTEIN: Well, that’s a question that a lot of people are asking. And I think there are some things, first of all, union power has been really reduced dramatically over the last 30 years, starting with Ronald Reagan in the 1980s. And typically, when unions have power, they’re able to raise wages. And that trickles up through the whole wage contour, the whole wage network, and so that’s a big factor. Unions are not able to protect workers. Another is that the minimum wage has lost value dramatically in real terms. And that also brings up wages from the bottom and then ripples up through the wage spectrum. And so the minimum wage is very low and has not been increasing much in real terms.

Finally, there is the foreign competition from China, from Mexico, from other places. And this has really made it much more difficult for workers to get wage increases, because capitalists can just move their production someplace else. So these are the main factors. And it’s hard to see these structural factors changing anytime soon until there are major structural changes in our politics.

GREG WILPERT: Okay. And finally, to what extent, if any, do the policies of the Trump administration deserve credit for the drop in the unemployment rate?

GERALD EPSTEIN: Almost none. The one factor that may be contributing to the continued expansion and slight acceleration is the tax cuts. Those will have some kind of fiscal stimulus, even though it’s mostly to the richest people. Plus, there’s a big huge increase in defense spending. And interestingly, that was timed so that it would come online around now before the election, it’s kind of a political-business cycle, as political scientists talk about it. So these huge increases in defense spending and the major tax cuts have probably had a positive effect on getting the economy growing, reducing the unemployment rate a little bit more.

But those things are temporary, and they’re also quite destructive in other ways. The main thing has simply been the fact that the expansion has been very slow over a long period of time, driven mostly by low interest rates. And you can tell that Trump even understands the importance of low interest rates, because he’s been railing against the Fed now that the Fed is trying to raise interest rates. If Trump thought this was something that was due to his policies, he probably wouldn’t put quite so much importance on the Fed and interest rates.

GREG WILPERT: Okay. Well, we’re going to leave it there for now. I was speaking to Gerald Epstein, professor of economics at UMass Amherst. Thanks again, Jerry, for having joined us today.