Sec. of State Pompeo announced that Cuban Americans and US citizens who lost property after Cuba's 1959 revolution can now sue companies that have benefitted from this property. This represents an important intensification of sanctions on Cuba, says Jeb Sprague

Sec. of State Pompeo announced that Cuban Americans and US citizens who lost property after Cuba's 1959 revolution can now sue companies that have benefitted from this property. This represents an important intensification of sanctions on Cuba, says Jeb Sprague 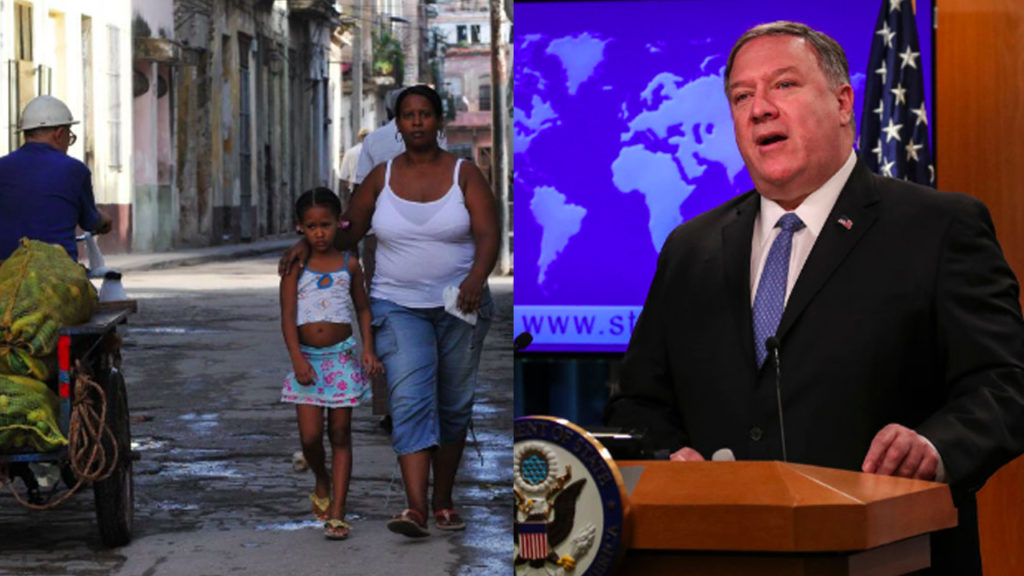 GREG WILPERT It’s The Real News Network and I’m Greg Wilpert in Baltimore. The U.S. economic sanctions on Cuba are about to be significantly expanded. U.S. Secretary of State Mike Pompeo made an announcement about this on Wednesday. Here’s what he had to say.

MIKE POMPEO Sadly, Cuba’s most prominent export these days is not cigars or rum, it’s oppression. Detente with the regime has failed. Cozying up to Cuban dictators will always be a black mark on this great nation’s long record of defending human rights. Implementing Title III in full, means a chance at justice for Cuban Americans, who have long sought relief for Fidel Castro and his lackeys seizing property without compensation. For the first time, claimants were able to bring lawsuits against persons trafficking property that was confiscated by the Cuban regime. Any person or company doing business in Cuba should heed this announcement.

GREG WILPERT The new sanctions, which take effect on May 2nd, are an application of what is known as Title III of the Helms-Burton Act, which allows Cuban Americans and U.S. citizens to file lawsuits in U.S. federal court against businesses that operate on property that the Cuban government appropriated after the 1959 Revolution. However, ever since the law’s passage in 1996, U.S. Presidents have waived this section of the Helms-Burton Act because it could be applied against U.S. allies in Europe and Canada. As a matter of fact, the E.U. and Canada have already pronounced themselves against this new intensification of sanctions on Cuba. Canadian and European countries have increased their investments in Cuba and can now be sued in U.S. courts and forced to pay damages to Cubans who lost their property as much as 60 years ago. The U.S. government has already certified 6,000 claims valued at more than $8 billion in total value. Joining me now to take a look at the new sanctions that the Trump administration is imposing on Cuba is Jeb Sprague. Jeb is Lecturer at the University of Virginia in the Department of Sociology and is author of the soon-to-be-released book, Globalizing the Caribbean. Thanks for joining us today, Jeb.

GREG WILPERT So what do you say, will be the effect of the application of Title III of the Helms-Burton Act on Cuba? What effect will it have?

JEB SPRAGUE It’s basically a tightening of the noose. They can go after third-party companies, groups that are doing business in Cuba from around the world that have no connection to what happened in 1959 and the early 1960s in Cuba. It says it all that the Helms-Burton Act in its very name is Helms. Jesse Helms— the North Carolina out-and-out racist since the late racist Senator. This was very much of a racist, imperialist, violent attempt at overthrowing Cuba— when they put that on Cuba during the special period, when the country had lost its economic lifeline with the Soviet Union, with the Eastern Bloc. The country was going through the most difficult time in its history so that act was very much meant to strangle any remaining lifeblood out of the country. Now we see what John Bolton’s declared a “triumvirate of tyranny” with this attack on these last remaining ALBA states in the region— where they don’t want any forms of indigenous development, that they need even just minor reforms that break with Washington’s diktats, and that different factions of transnational capital that are closest with Washington, that are not happy about this— now they’re going full-steam after these countries. So the attack, the economic war-attack on Venezuela goes alongside also the NICA Acts targeting Nicaragua, and now bringing back this act, the 1996 Helms-Burton Act, against Cuba.

GREG WILPERT Your book actually, Globalizing the Caribbean, deals with the economic situation of the Caribbean. I don’t know to what extent it deals with Cuba, but my understanding is that Cuba has become in a sense also more integrated into the global economy. And so, I imagine that that’s probably one of the reasons why this Helms-Burton provision of Title III will have a greater effect on Cuba today than it would have maybe twenty years ago. Can you say something about that?

JEB SPRAGUE Yeah, that’s a very good insight. Cuba— it’s a very contradictory situation that the Cubans have tried to navigate. On one hand, they are under this constant blockade, the soft power, and different forms of intervention that the U.S. and its allies launch against Cuba. But at the same time, they need to integrate. They need to work with companies with businesses around the world. They have some of the lowest wages in the region. They lost $130 billion, according to U.N. officials, over the nearly six decades since the early 1960s. They need to bring in foreign investment and to maintain. Even with all these problems that they face with the lack of resources, doing things on a shoestring budget, they still have very good health care programs, good social infrastructure for poor people in the country. And so, it’s a difficult situation but this also connects back to the O.A.S. like we talked about in the previous interview. In 1962, the Foreign [Affairs] Minister of Cuba, Dr. Raul Roa Garcia, he really baptized the Organization of American States when he called it the “ministry of yankee colonies.”

GREG WILPERT Yeah. I think that’s very important to remember, but we’re going to have to leave it there for now. Speaking to Jeb Sprague, Lecturer at the University of Virginia in the Department of Sociology. Thanks again, Jeb, for having joined us today.