In pursuit of regime change in Iran, the Trump administration and prominent Republicans and Democrats alike are supporting the Mojahedin-e Khalq (MEK), which former top US official Larry Wilkerson says is a "bloodthirsty cult." Ben Norton reports

In pursuit of regime change in Iran, the Trump administration and prominent Republicans and Democrats alike are supporting the Mojahedin-e Khalq (MEK), which former top US official Larry Wilkerson says is a "bloodthirsty cult." Ben Norton reports 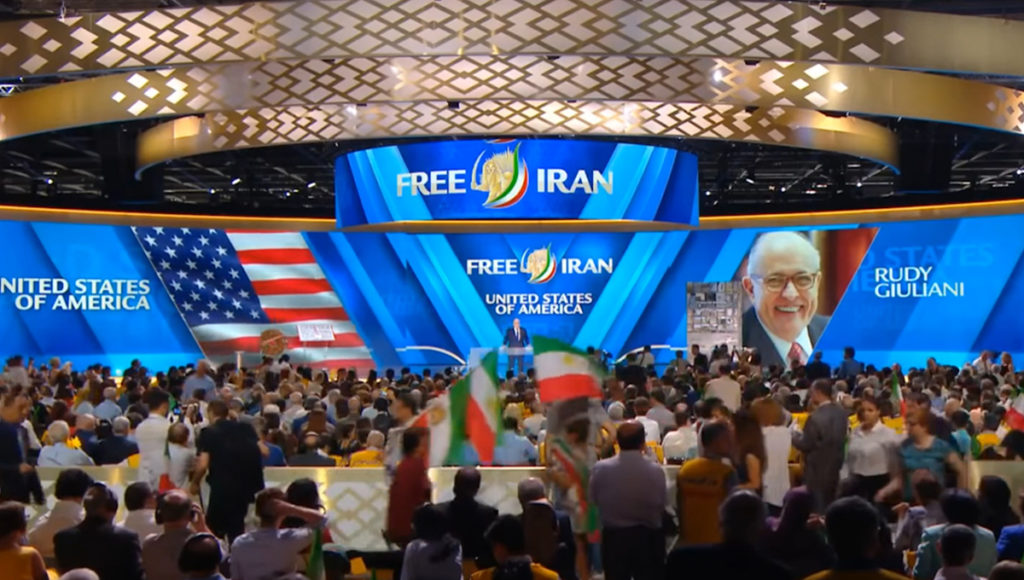 BEN NORTON: The Donald Trump administration has made regime change in Iran one of its top foreign policy priorities, and some of the extreme warhawks Trump has willingly surrounded himself with are supporting a fanatical cult in hopes of toppling Iran’s government. The president’s personal lawyer, Rudy Giuliani, has been a keynote speaker at multiple conferences held by the Iranian opposition group the Mujahideen-e-Khalq, known popularly as the MEK. At a summit in Washington, D.C. in May, Giuliani declared that Trump is committed to regime change. Weeks later in June, Giuliani again spoke as a keynote speaker at the MEK’s conference in Paris.

RUDY GIULIANI: We are now, I believe, very realistic in being able to see an end of the regime in Iran. We can see it.

BEN NORTON: The MEK was considered a terrorist organization by the United States government until 2012. Larry Wilkerson, a former top George Bush administration official, told The Real News Network that the MEK is a bloodthirsty cult that is widely considered by Iranians to be full of traitors.

LARRY WILKERSON: I mean, this is a group that, when I was chief of staff of the State Department, Donald Rumsfeld and Colin Powell actually worked together, one of the few times they did, to keep them out of our hair in Iraq. And that was primarily because, number one, they were on the top of our list of terrorist organizations. Number two, they were a bloodthirsty cult, and we knew that. All of us knew that. The intelligence people knew that. The diplomats knew that. Everyone who ever had any dealing with Mujahideen-e-Khalq knew that they were a cult, first and foremost, and a brutal, bloody, ruthless cult all together.

I have never met in all my time and dealing in track two diplomacy and other diplomacy with Iran, and with dealing with the Iranian people in general, and Iranians in this country, for that matter, other than those around the royal group in this country, or in Iran, who thought they were anything other than traitors. Traitors and terrorists. Because they joined Saddam Hussein in what to most Iranians was the most seminal period in their lifetime, and that was the brutal eight years of war between Iraq and Iran, started, of course, by Iraq. So they see these people as traitors.

BEN NORTON: The MEK is one of several terrorist organizations that the U.S. government has allied with on and off, supporting it when it is politically convenient. Trump’s hyper-hawkish neoconservative national security adviser John Bolton is a staunch supporter of the MEK, and has previously spoken at its annual conferences. President Trump’s lawyer even took credit for helping to lead a global campaign to get the group unlisted as a terrorist organization.

RUDY GIULIANI: We fought a worldwide battle to shed the unfair label of terrorism in the United States, the United Kingdom, the European Union. That label is now gone, and you are seen as defenders of human rights.

BEN NORTON: Larry Wilkerson, a retired U.S. Army colonel who previously served as chief of staff to Secretary of State Colin Powell, says the MEK has spent large sums of money and carefully undergone a rebranding to portray itself as democratic, secular, and moderate. Wilkerson argues that the U.S. has helped to facilitate this rebranding to push for regime change in Iran.

And I think what you see, in order to use them, to employ them as a Chalabi-like tool in this march to war with Iran, they have been refurbished. I think Saudi money’s been in there. I think U.S. money has been in there. I think big-time money has been spent with largely U.S. European marketing entities that refurbished their name to make them look good. And I’ve even been told, I assume- this is coming from some of my intelligence community contacts- I’ve been told that they are keeping what was the more radical leadership in the shadows. They’re not letting them be exposed so much, because they realize they still are the same people they were before.

But they’ve got new people to interface with the public, as it were. And they’ve got a new image, as you pointed out. And that image is being marketed by these very good marketers who are being paid enormous sums of money in order to do this. So it’s not quite as easy as it was with Chalabi and the Iraqi National Congress. I mean, we had all kinds of reports about their wasting money and being useless. Secretary Powell even turned them over the Pentagon because he was fed up with them. But I think this group is even worse. But at the same time, they have better marketers. They have people who are really good at advertising them and making them look good.

BEN NORTON: Rudy Giuliani, in fact, bolstered this explanation when he boasted at the MEK’s conference in Paris that the U.S.-backed cult is allegedly coordinating the protests that are rocking Iran.

BEN NORTON: Although the MEK has become largely associated with ultraconservative hawks from the Republican Party, it also has increasing support among corporate Democrats. Nancy Pelosi, the leader of the Democratic Party in the House of Representatives, also issued a statement of warm greetings to the MEK conference, which she described as a gathering of the, quote, friends and supporters of a free Iran.

Wilkerson argues that the growing bipartisan U.S. support for this Iranian opposition called is the result of the dangerous idea that the enemy of the enemy is your friend. And he warns that the Trump administration’s belligerent aggression against Iran eerily reminds him of the Bush administration’s policy on Iraq.

LARRY WILKERSON: Well, you’ve got people like Nancy Pelosi and other Democrats, and certainly people like you’ve named, and others in the Republican Party, who subscribe to the very simplistic proposition that the enemy of my enemy is my friend. Even if that enemy has been my enemy for a long time.

And that’s the case for the MEK. And as I said before, this is a very very similar situation to Ahmad Chalabi and the Iraqi National Congress in 2002, a situation with which I’m very familiar, because what’s been happening is there’s been this desperate search by everyone from the Foundation for the Defense of Democracy, which is really the replacement for Doug Feith’s Office of Special Plans at the Pentagon, which manufactured the intelligence for the war with Iraq, including connections with Al-Qaida and 9/11, and the weapons of mass destruction, which were nonexistent. This is the group FDD, now, that outside the Pentagon, outside the formal government structures doing the same thing that Doug Feith’s group was doing, manufacturing intelligence.

Now, I think, I’ve sensed of late that what the administration really wants, and what it would prefer- and this is probably, I have to say this, it’s probably because of Donald Trump’s influence on this situation, if he has any at all. They’re trying to bring so much pressure to bear on the Ayatollah, on Rouhani, and Zarif, and others that the regime collapses of its own weight. And they’ve interpreted the recent disturbances in Tehran, in particular. And I think this is a misinterpretation of those disturbances. But nonetheless, they’ve interpret them as an indication that it’s working.

So they think tightening the sanctions, making everything effective by November, getting Iran’s oil off the market, ceasing that method of their making any money in the world and so forth, is going to topple the regime. So I think Donald Trump thinks he’s going to do all this without war, that we’re going to wind up with the regime crashing of its own weight. I think that’s rather naive. I don’t think that’s going to happen. And I think in that not happening, John Bolton’s going to try others, and we’re going to wind up on a war track with Iran.

RUDY GIULIANI: Will it happen? Yes. When will it happen? Now. And I want next year at this time, I want us to have this convention in Tehran.